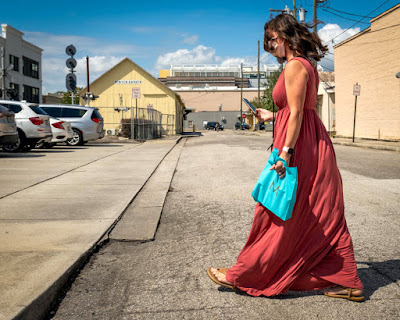 Though I've said I didn't want to photograph people in masks to remind me of this Time of Covid, what can you do?  The Harvest Moon has brought Covid to the Trump family.  Holy smokes, right?  No matter what, it is dangerous when the president gets sick.  Somehow, you just didn't imagine it would happen.  I don't know why.  It now seems that it was inevitable.  If Pence has it, too, there is a chance that Pelosi would serve as acting President of the United States of America.

On the same day, we hear the Melania's "Fuck Christmas and the Children" tape.  That's a fun one.  Also, we get the Kimberly Guilfoyle sex scandals scoop (link).

An all-around bad day for the Trumps.

If you are a Trumper, though, I know you are not worried.  There is never a downside for Trump, only upsides.  Maybe he gave it to Biden and that shit-heel Wallace during the debate.  Maybe his press secretary, Kayleigh McEnany, gave Covid to that pussy liberal press corps.  And if Trump gets through this without any serious effects, he will be another John Wayne style hero.

Yup, if you are a Trumper, there are nothing but upsides to any Trump disaster.

I didn't see it.  Was Trump's interview with Hannity live or by phone?  I'll bet Hannity was savvy enough not to get close to Trump.

The downside for Biden supporters is that Trump won't be "out there" getting out the democratic vote.  The less he is seen, the better for him--same as it was for Biden.  Remember, people aren't voting for, they are voting against.  You need to see the thing you are against to really get you pumped.

That all happened on the full moon, a moon I didn't get to see.  I tried.  I went to the lake and sat out waiting for it to rise above the trees on the far shore, but clouds kept it hidden.  Later, when I went outside to see if I could view it, it was still hidden.  Selavy.  It seems to have had a busy night.

Soon we will all be in lockdown again.  I've been living that way until just recently.  I've loosened my regimen a bit, getting take out food and having lunch outside with a couple of friends in the past few weeks and going to a distant Farmer's Market to make some pictures.  But Covid will have its way, and the stupidity of opening up bars and restaurants and schools, of having football games and letting kids play pandemic sports, will become apparent.  And I'll be glad I have started reading the World Religions book that will take me the rest of my life to finish.  It is a nice piece of scholarship for someone not trained in religion, a primer, sure, but educational in a deeply serious way, written in academic language and style.  I am doing some serious highlighting as the concepts are apropos of much more than organized religions.  I am weaponizing the language for arguments with theorists of all makes and models.

That is how I spend my evenings now, mostly eschewing television, though I watch a few YouTube things on cameras and sailboats.  And I am drinking much less--most of the time.  I am trying to become a "civilized" drinker rather than a Hemingwayesque pounder.  I don't want to become the bore/boar/Boer/(what's the other spelling?) that my ex-friend Brando became.  I spent many nights with him knocking over wine glass after wine glass and punching me in the arm for emphasis as he told his tales.  I always made the mistake of sitting on his right side.  That was the dangerous place.  No, I will be an elegant drinker and not the Covid alcoholic it is so easy to become.

That looks like the future, doesn't it?  A good book and a cup of tea?  Texting friends until that becomes too much.  Listening to music until you've heard it all too many times?  Trying not to think too much about past failures?  Googling the names of old lovers and people you used to know?  Long walks in less populated places?  Trying to find a source of toilet paper?

I have a talent for turning things in a certain direction, don't I?

Well, the Wrecking Crew comes today, and my house is a mess of camera and audio recording equipment and other gimcracks of paraphernalia covering all the surfaces of my home.  I have a lot to do before they get here.  And my phone is blowing up.  If this piece seems fractious, it is because I have been responding to my friends.  So for now, I must away.  But the news is as ongoing as my life is stationary.  There will be more coming.  Stay tuned.