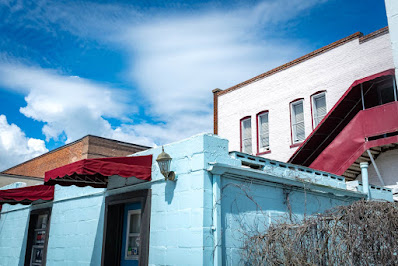 I am disaster minded, I know.  I have been since I was a child.  I am imaginative which is not good for mental health.  I imagine how everything can go wrong.  As a child, when the family's annual vacations were coming up, trips to the homeland or for a week in a hotel at the beach, I would make myself unwell with anticipation.  What if everything didn't go right?  What if it rained all week?  What if. . . what if. . . ?

It has carried over into adulthood (if it can be said I have ever achieved such a thing).  A painful pimple under my arm is absolutely lymphoma.  Any abdominal pain is cancer.

My house has been sinking into the earth, rotting from the inside and out.  There is no hope of saving my nearly 100 year old wooden house.  Why would I buy a wooden house in this wet, mildewed state?

The fixit man came to work yesterday.  He opened up the water damaged wall and ceiling.  No mold.  Much less work than he anticipated.  An easy fix.  Same with the damaged exterior boards.  They don't need to be replaced.  The deck I built four years ago has already rotted.  Why?  Pressure treated wood?  It was like a voodoo spell had been cast.  The fixit man figured out the problem.  When I changed out he mulch for granite in the driveway, the ground became less permeable and the water ran rather than soaked.  I had a very sleepless night thinking I would have to remove all the granite and completely rebuild the deck.  Then, in the morning, I came up with a solution.  He agrees that it will work.  And we will not have to remove most of the granite nor rebuild the entire deck.  It will be work, but there is a solution.

It is only my anxiety that holds the world together, though.  I realize that.  I must never stop worrying.

All by way of saying, be ready for disaster.  I have quit worrying about the election.  I don't care anymore.  I have quit watching the "news."  I don't need their hourly electoral college predictions.  I know that Corona virus is going to be more widespread.  They've reported that already--a quadrillion times.  I just can't work myself up about these things any longer.  I get it.  Biden is ahead.  Trump may win anyway.  If not, the militia of deplorables are going to do terrible things.  Trump will not concede.

Fuck us.  If that is what happens, that is what we get.  I think I am screwed either way.  Neither party likes me.  I am a dangerous nay sayer who will point out that the one's I agree with are wrong.  I am nobody's favorite.  No matter what, I can only hope to be ignored rather than ridiculed, scorned, and beaten.

It all begins this weekend.  Buckle up.  Get ready.  Katy bar the door.  First there is Halloween under a full moon, a blue moon at that.  Then we shift the clocks.  And then the election.  The virus is going to take over again and we will all be in isolation for the dark holiday months while either militias or antifa prowl the streets.  The national guard will be ordered out and the FBI will be in disarray.

There.  I have performed my theory.

It is difficult for me to understand why candidates fly around the country from state to state campaigning.  Especially now.  Are there really and truly people who go, "Well, I wasn't going to vote for him, but when he decided to make a stop in Atlanta, I said, fuck yea, he's the one for me."  If that is the case, we need to figure out another way to pick our nation's leaders.  The constant advertising on television, the internet, and by mail is abominable.  The Biden campaign is bragging about how much money they have raised to spend on campaigning as if that is a wonderful quality.  "We won the election because we outspent them two to one."  It is an abhorrent thing.  That the citizens of our nation don't want to regulate this is a posey on our character.  How can anyone believe in the efficacy of such government?

I am preparing for the coming disasters now.  I'll stock up on things that might be in short supply this weekend.  I am fixing the house and getting the entire interior repainted in anticipation of another Year of Living Dangerously (Alone).  I'm going to buy some decorative and practical  things just to cheer me up.