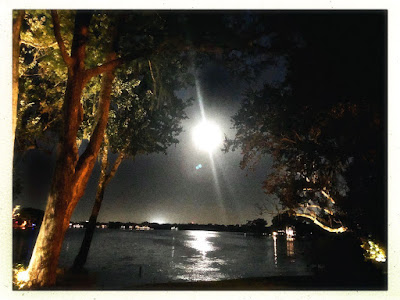 I had like ten cameras in the car when I saw this, but I was so tired, I used my iPhone.  It was not a moon to just let pass, though.  Historic really.  And so I stopped the car on my way home from mother's and ran down to the lake to make a quick photo.  But in truth, my body was aching to get home.

The repairman is doing a great job.  Jobs.  Every time he does one thing, I find more for him to tackle.  Right now, my house is a construction site.  I have let things go for far too many years.  Still, in a moment, it will all be set right again.  Two of the three doors to the outside have not opened right for long time.  Two of them now do.  The other. . . soon.  The cracks in the plaster that are the result of the house settling a bit in the twenty-five years I've had it are now gone.  The water damage to the ceiling and walls in the guest bathroom is now fixed.  All that will be painted today.  But there is much more to do.  Once the plastering and painting are done, though, the repairs will be less intrusive.

I made five trips to the paint store yesterday trying to find the right for the walls.  They are a light buttery yellow, pale but rich.  I used a Benjamin Moore paint, one of either the Historic or the Williamsburg colors, but I cannot find it.  My repairman is a painter.  I mean, he makes art.  His color eye is amazing, so after many trips to the paint store, I returned with many samples.  He picked one out.  Nailed it.  What he didn't know that I did, though, is to paint the ceiling with a 50% blend.  It is the same color, just a tad lighter so the ceiling feels like it is floating.  Since my ceilings are 9'2", the result really makes the rooms feel expansive.

I am not able to sit around while a workman works.  I explained this to him.  I feel like a bitch.  It is a macho thing.  Still, running to the paint store and getting us lunch didn't feel that manly, so I got to work in the yard and then the garage.  I think I've gotten most of the weeding done, so I tackled the stacks of equipment that came back from the studio oh so long ago.  I have much need of organizing things there, so I tore all the boxes of equipment and the light stands and big studio strobes and reflectors off the creaky wooden shelves.  I've identified everything.  It is lying all about now.  Today, I must repackage it all and try to organize more efficiently.

I want another studio.

When the workman left, I showered and got ready to go to my mother's house to pass out candy to the little ghosts and goblins.  My mother's street is THE trick or treat street in the neighborhood.  The neighbors make elaborate spooky houses on their lawns and they make haunted sidewalks with tunnels the kids must walk through.  I ordered up two mahi sandwiches from the good fish company and took them over for dinner.  I got there too early, though.  It was only five.  It would be awhile before the kiddos came. 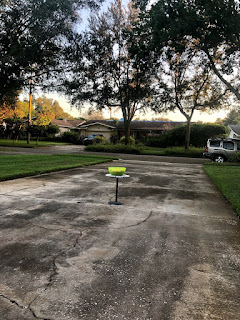 We were practicing safe t&t, so we put the candy in a bowl halfway down the driveway so the kids were safe and we were safe.  They showed up in droves.  Great kids and costumes, very friendly parents.  Again, I felt what the word "community" meant.  I felt a real sense of good will and pride and a belief that given the opportunity, people can be decent to one another.

I get this feeling every Halloween.  Weird, right?  I mean, what a time for group appeal. I even get a kick out of the picky kids that can't find the kind of candy they like as they dig around looking for just the right piece.

"I already have these!"  Or, "I don't like Butterfingers."  My mother buys cheap candy, but I had put in a bunch of Reese's Peanut Butter Cups.  They went fast.

At home, I poured a beer and sat on the big leather couch.  I thought about turning on the television, but it seemed an irritant rather than a comfort.  My fixit guy believes in astrology and had spoken of what an auspicious thing this full moon was, especially with Mars being so close, etc.  I couldn't help it.  I looked at my horoscope.  Scopes.  Many of them said that I should look for a rekindling of an old love affair.  Hmm.  Which one, I wondered?  As I sat on the couch sipping the IPA, my mind drifted and my eyes closed.  When I opened them again, it was nine.  The time was changing.  I had to consider it eight o'clock.  But I couldn't stay awake.  I just couldn't.

There was/is more, but the repairman has come and now I must earn my bread by the sweat of my brow.

So it is said.