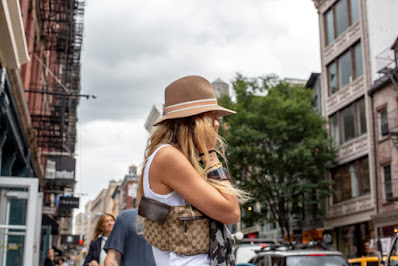 What can be done?  Pictures like this will be illegal to make soon.  Street photographers are to blame, of course.  They are no different than the rest of humanity.  They make everything impossible because of their aggressive and selfish ways.  Selavy.  We all lose, in the end.  But. . . it is like everything else.  Things were better in the past. . . except for the things that weren't.  Times are great.  Times are rough.

They are rough around my house.  It is Friday night, I hear, but it might as well be Monday.  Mr. Fixit will be here in the morning before I have had a cup of coffee.  My time is not my own, so I write tonight in order to post tomorrow.  The bathroom comes along, but ever so slowly, and Mr. Fixit was not in a good mood today.  I can't blame him.  He did not come to do such a big job.  So I am the castrato, the steer who takes the bull's horn to calm him down.  I've run with the steers and the bulls in Pamplona.  I didn't want to fuck with either.

I tried to make some room in my house today as I find that we will not be done anytime soon.  He is hoping to be finished before he leaves on a Christmas Holiday.  What?!?

I had no idea.

But the hogs are greased and out of the gate and there is no easy way to get them back in at this date.  We are in for the whole rodeo.

I'm not saying it is a good photo.  My friend Jan is a much better photographer of street life than I.  Jan.  He is Swedish.  A Swede.  It is funny, that "ish."  His name is "Yon" phonetically, but I, being American, always say Jan--rhymes with "man"--in my head.  I'm Americanish, I guess.

Remember that Mailgram I posted yesterday?  That is a loooooong story that includes my friend and mate at the factory.  Want to hear?

I had a friend in elementary school who lived down the street.  His name was Tommy.  He lived in the "spooky" house.  Nobody was allowed in.  His father kept the lawn immaculate which was much different from the rest of the sandspur infested Bahia grass and dirt yards in the neighborhood.  Tommy was a lousy athlete.  But he could draw, and he was funny.  His stepmother was a flouzy blonde who would buy us Playboy magazines if we asked.  We did.  Tommy's mother and father were divorced, and his father got the two oldest kids and his mother got the two youngest.  When Tommy's father wasn't around, I was allowed in the house.  One Friday night, his dad and stepmother were out and Tommy's older sister had a girlfriend over for the night.  His sister and her friend put on records and got me to dance with them.  His sister, hotter than a firecracker, taught me to kiss.

Turns out Tommy's father had been diddling his sister for awhile.  She said so when her boyfriend got her pregnant when she was sixteen.  She married him to get out of the house.  It was after that that Tommy went to live with his mother.

His mother was married to Rex.  They lived in a 10x60 trailer in a marginal trailer park on a lake.  I used to go over after I turned sixteen and got a license and a car.  Tommy, his younger sister and brother, and his mother and Rex lived in the two bedroom trailer.  I often stayed over on weekends.  Tommy dropped out of school in the 8th grade and got a job to help out with money.  He worked in gas stations and tire shops, by and large.  He was in love with Deana, the sister of one of his trailer park friends who had also dropped out of school, but Deana was in love with an older fellow from Alabama who, on occasion, came to visit.  It was a big deal when he came.

We later found out that Deana's mother was fucking him.  But Deana got pregnant by him, too.  And that was the last we saw of the gentleman.

Deana got another boy to marry her and be her baby's daddy.

Tommy, realizing he didn't have a chance with Deana, began "seeing" another girl in the trailer park, Debbie.  We would all go tot he drive in movie and they would screw in the back seat while I watched the movie.  I saw "Romeo and Juliet" many times and could recite the lines with the actors.

By that time, I had graduated high school.  Deana's father was a construction foreman and was able to get Deana's brother, Tommy, and me, into the Labor Union so we could work at the big new resort being built on a floodplain in a connected county.  We worked ten hours a day, seven days a week.  The money, however, was too much to turn down.  We made more in overtime pay than for the forty hour week.

Tommy couldn't take it, and he started skipping work.  Meanwhile, Debbie was getting more pregnant.

By summer's end, I had decided to go to college.  Tommy and Debbie decided to get married.

In college I met a girl, and when I had an operation that kept me in bed for a very long time, she would visit me every day.  And one night, she decided I should be her boyfriend.  What could I do?

In a few months, I went away to the University one hundred miles to the north.

Half of those thousand letters I've been culling of late are from her.

O.K.  So the Mailgram you read yesterday was from her.  She was going to see Debbie who had just had twins.  I was living with my college roommate when she sent it.

Sherri came up to the University a year later.  She had a roommate in her dorm that my roommate began dating.  Oh, what fun we all had.  When I graduated, however, after my long hitchhiking trip around the country, I had to go back to my own hometown and try to find work.

I got the teaching job.  A few years later, I got my college roommate a job at the college, too.  He had come back to town after his girlfriend had broken up with him.

One night in a bar I often went to, I saw Debbie.  Tommy had abandoned the family and she was going to college and trying to raise the girls.  My roommate needed some romance, so I introduced the two of them.  They moved in together and later got married.  He raised the children of my friend Tommy.

Weird, right?  I mean, I was living with him when my girlfriend sent the Mailgram.

Just to make it weirder, Debbie's father married my roommates mother.  Debbie and he got divorced, but they were still connected by their parents.

Now that is the Reader's Digest Condensed version of the tale.  It is the best I can do on a Friday night.  I want to watch some t.v. and drink a bit more before bed.  Before I know it, Mr. Fixit will be here.  I hope.  I mean. . . I can only hope.

For fuck's sake, I hope your Friday night is better than mine.