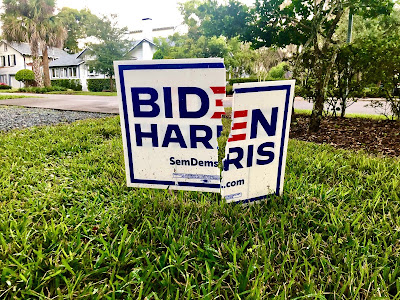 The Blue Tsunami that wasn't.  I think I may never watch the liberal media again.  I listened to Wolf Blitzer interrupting John King last night.  Blitzer was cheerleading against King's neutrality.  King said of the crazy results, "This is what makes election night fun."  Blitzer was a whining hopeful who sounded as if a bully was taking his candy.
"John. . . show us where Biden is winning!"
King wasn't biting.
I called the election for Trump when I saw the results in Dade County, Fl.  It was validation of what I have feared all along.  The dems strategy is as divisive as Trump's.  We don't say that, of course.  But Biden went after the women's vote, especially the black women's vote, the LBGTQ vote, and any other marginalized group's vote.  I kept saying that this would turn out like 2016.  Biden's strategy just left too many people out.  When he lost the Hispanic vote in South Florida, I thought, "Yep, the dems have done it again."  They just don't learn.
One day, there may be an inclusive party, but God knows when.
So. . . I'm glad I am putting my place back together.  Yesterday, the tree guys were here.  They trimmed bushes and raised the tree canopy.  My property is light and bright with filtered fall sun.  The living room is patched and painted.  There is still much to do for Mr. Fixit, but we are slouching toward renewal.  The paint color worked out perfectly.  It will be important to have a very comfortable environment in the coming year.
C'mon Netflix.  C'mon Amazon.  Give me something good to watch.  Make it many, make them long.  I promise, I won't be watching the news.
Those lying fucks.  This time, even Vegas was wrong.
Q sent me a real estate guide to Italy last night.  I forwarded it to all my liberal friends.  None of them wants to live here now, they say, but they are liars.  They won't move.  As romantic as the notion is, most places are no more liberal than the U.S. and most governments are as or more corrupt.  Middle class Americans can't afford the Nordic countries that they like to point to as the best places in the world to live.  They can afford Mexico.  They can afford some of the countries of the Far East.  You know, the really cool places with no political strife.  Thailand maybe, eh?
I'm just going to refuse to understand the language spoken around me.  That is what I find so attractive about foreign travel.  I don't know what people around me are saying, so I assume they are all wise sages having profound conversations.  You know, the wisdom of the primitive and all that Rousseau romanticists ideology.
Isolation is beginning to have its appeal.
I have a physical today.  I couldn't help myself.  I bought a bottle of scotch last night.  That after eating a Malaysian meal brought by the Malaysian Mr. Tree.  Mr. Fixit and I ate as he explained the food.  I am drinking coffee and eating scones this morning.  My blood work is sure to be bad.
Selavy. What a word. . . what a world.
Posted by cafe selavy at 7:32 AM