So Long to the World We Once Knew (Hello Future) 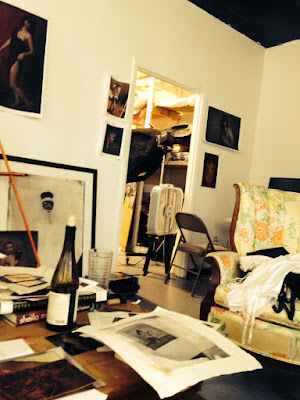 My phone is blowing up tonight.  Friends are asking me if I am nervous.  Oh. . . it is here.  I've been balls deep in the home project, and like Christmas, after all the hype, the election has snuck up on me and I am not prepared.  My answer is no, I am not nervous.  I am resigned.  Then I ask if they stocked up on ammunition.  Some say they did long ago.

I may have to turn the news on in a bit.  I haven't watched it for over a week.  Maybe they know something.

I had a marvelous day.  The weather was perfect, not a cloud, the air as soft as momma's breast on a baby's cheek.  It felt new.  It felt young.  The fixit man gets here early and we sit and have coffee and talk for a long while before the work begins.  He has been bringing scones and other bad things, and I have been wooed and have succumbed.  While he works in the house, I work in the yard and/or in the garage.  Both are looking marvelous.  Today, I bought lunch and we ate outside, as we have done every other day, then Mr. Fixit went to the post office to ship a painting he just sold.  When he got back, he said, "Did you take a shower?"  I had.  I planned on doing some errands in the afternoon.  I guess he's never sees me "cleaned up."  And so I went to the bank and then to Home Depot to buy a new front door lockset.  Home Depot did not carry the Baldwin brand, so I bought a few other things and went to the grocers.  When I got back, I told the Fixit man that I didn't get the lockset and he said Google it.  I did.  There are so many door fixtures, it was hard to find mine.  Then I did.  HFS!!!!!!! It is a $500 set!

We are going to try to repair it tomorrow.

I put the Great Northern Beans and chicken thighs and onions and carrots in the InstaPot to cook and ran out to buy some new plants for the mantle to replace the old ones I let die.  It was just pleasant to be out.  I drove with the windows down, the cool air washing over me.  After five months of deadly summer, it is an indescribable treat.  It didn't matter that the store didn't have the plants I wanted.  It was just good to be about.  I stopped at the hardware store to get some small files that we will use on the door tomorrow.  I scored some bags for an old vacuum in the garage, too.  On the way out, I passed a candy display.  I recognized the candy from my youth.  My father used to buy these.  There were root beer barrels and old jaw breakers and some Bit-O-Honey's, too.  At the counter, I asked the lady ringing me up, "Do you think they still make that candy, or do you think somebody discovered an old warehouse full of it?"  The old gal liked that one.  She wasn't sure, she said.  We were instant pals.  Some days are like this, just fantastic and lovely.

When I got home, I got a phone call from an old work friend.  She just calls from time to time to check on me.  That is what she says.  She wants to know if I am o.k.  She wanted to know how I was feeling about the election.  She was wired and was taking the day off, she said.  She has been canvasing and working the phones all week.  She is a poli sci prof and a data queen and an all round good soul.  She always makes me feel loved, and her call enhanced my already fabulous day to an nth degree.

More text came from ex-colleagues.  It felt as if the stars were aligned.

Mr. Fixit said he didn't want to have to deal with the workday traffic, so he was going to work later if it was o.k.  I said, "Well, then, it looks like you're in for dinner."  He was down for that.  "Well, then, shit. . . I'm going to go get some good beer.  We can't eat this dinner without some good beer."  I ran up to Little Habib's market which was the closest one, and fortunately, it had one of the IPAs I like, a good, strong one.  So much for cleansing my blood for the physical on Wednesday, I thought.  Scones and beer.  Just what the doctor ordered.

Just as we were dishing up dinner, my tree man pulled into the driveway.

"Do you have enough?"

And so, for the first time since February, I had cooked dinner for others at my house.  We sat outside on the patio before the fire I had built in the fire pit and ate and drank and talked as the sun went down.

"I need to bring you some firewood," said Mr. Tree.  "Do you like Malaysian food," Mr. Tree asked Mr. Fixit.  Mr. Tree is an Indian from Malaysia and he wanted to take us to dinner tomorrow night.  "The food is really great," he said, "and the owners are from Malaysia and we are friends."

Later, I asked him if the restaurant had outdoor seating.  I was nervous about sitting inside.  He said they didn't, but he said he would pick up the food and bring it to my house and we could sit out and eat it here.  I was tremendously relieved.

When they were gone and I had cleaned up, I decided to pour a bourbon and light a cheroot and sit and watch the fire.  In the near dark, I saw the feral cat move to her food bowl.

Turned out, I was talking to a raccoon.  It didn't respond so well to my sweet talk, though, and I jumped up out of my seat in surprise.  The startled raccoon ran away.

And then my eyes grew heavy.  I put away my laptop and turned on the television.  It was late, and Chris Cuomo was saying the same things they all have been saying for months, so I put on the last episode of "The Circus" before the election.  Then I woke up.  I don't remember any of it.

It is election morning now.  I woke at five.  My house is a mess of drop cloths and plaster dust.  Mr. Fixit, Mr. Tree, and the lawn guys will all converge on my house soon.  Organized chaos descends.

After dinner tonight with Mr. Fixit and Mr. Tree, I will come in and watch the election results alone. . . I guess.  I mean, they won't actually be the "results," will they?  God--this could go on forever.

Perhaps I will meditate a little.  I will have had a full day and a Malaysian dinner and I have my physical scheduled for Wednesday with Dr. Prescription.  She will try, I know, to put me on any medication the salespeople pay her to prescribe and I have blown my organ cleansing plan.

Good luck, my friends.  None of us will win tonight.  I am not nervous.  The old world has blown up and we can't go home again.

Only the kids are happy.