Oh, I Wish That I Cold Be Richard Cory 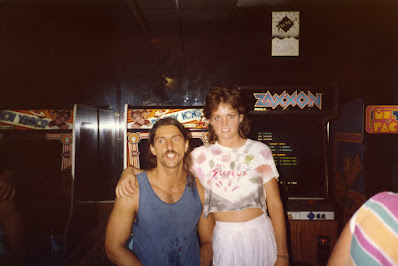 I'm a little disjointed, disoriented, and melancholy tonight.  I've been scanning and listening to music and drinking, of course.  It is the drinking that does it, that sends me down that rabbit hole.  But the old photos and the music certainly play their parts.

I sent this photo to my mother when I scanned it last night.  The t-shirt was made by the drummer of the band as was the poster on the wall at the top of the frame.  He was more talented than I gave him credit for, I realize now that I have been watching documentaries on tagging and the street art of the time.  Oh. . . the photo is from the very early 80's.  That explains my girlfriend's hair.  Nothing explains mine.

This was taken in a pub on the Boulevard we played quite often.  The owner thought we were the shits.  The pub served a largely Country Club College crowd, and that is where I learned to talk without saying anything.  Prior to this, I was prone to analyzing things.  But here, I learned to speak in monosyllabic code.  I learned you could be more popular that way.

Zaxxon was the only video game I've ever played in my life, I think.

The bathroom is coming along.  Mr. Fixit is quite grumpy, as I said this morning, and he warned me of the big bill coming tomorrow.  The tiling is finished and the toilet is back in.  I ordered a new vanity and hardware and a clear glass shower door.  He will paint the walls and be ready to install the doors and vanity when they arrive.  But tomorrow will be sticker shock.

Mr. Fixit left in time for me to go over to see my mother today.  I had not seen her for three or four days.  I asked her if she got the photo, and she said yes.  She also said she would not have recognized me.  This is scary for a couple reasons.  One, of course, is that I have aged, but the other is her memory.  She told me something tonight that scared me.  She said she didn't think she would live another year.  This was when I reminded her that her birthday was just over a week away.  Fuck.  The worries never end.

And so tonight, after my mother's forewarning and Mr. Fixit's inevitable expensive exit, I felt an aloneness that I haven't felt before.  Perhaps it is all the photos and letters, and perhaps it is the holidays without Ili, but I felt broke and alone and despondent.

Thusly. . . drinking and scanning and music.