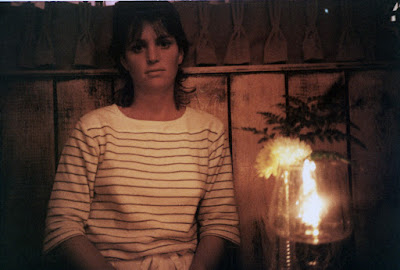 Again, I'll write a bit tonight in case I am prevented from writing in the morning.  The moon is full and the temperature is dropping.  I've been scanning some as Mr. Fixit is laying tile and has no need of my "expertise."  It has been long and tedious process.  The scanning, I mean.  Mr. Fixit assures me that the tiling is as well.  In the end, I wonder why I bother.  Scanning, not tiling.  But I know why.  I know.

This is my girl in some restaurant on a trip we took from in 1983 from our own hometown to NYC, up the coast by ferry, then by rental car, from Mystic to Maine and back to Newport.  There are tales to be told, but not tonight.  '83 must have been a long time ago.  It sure looks like it.

I didn't write very much last night, but Mr. Fixit is not here so early in the morning, so I will continue.  I had trouble writing as I was playing the first holiday music of the season (link).  The station is not as good as it used to be. . . but what is?  Why was I listening to it, anyway?  The hallmarks and touchstones of my holiday season will surely all be cancelled.  The downtown lighting of the Christmas tree (yes, we still do that here), the outdoor concert by the Bach Choir, Vespers at the old chapel, the Christmas parade. . . surely none of that will take place.  Perhaps that is why I was listening, though.  Maybe I felt there needed to be something.

Or maybe it was nostalgia from looking at so many old photographs.  I'm thinking of decorating the exterior of the house a bit.  Well. . . if we ever get finished fixing it.  We won't.  There is no way.  And maybe, that, too, fueled the holiday music urge.

"Did you ever dance with the devil in the pale moonlight?"  I thought of that line last night as I looked up in the cold, full moon sky. 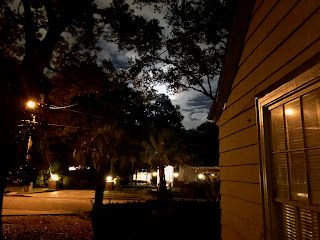 Crummy phone photo.  Night photos are always over-sharpened.  Still, I had to take the shot.  Winter weather swept in on the last day of November.  It is what passes for cold here in my village.  My old house has no insulation.  The cold air seeps in from the windows and floors.  I will have to dig out some different clothing.  Or not.  The cold won't last.

I was on a Zoom meeting yesterday late afternoon.  It was my college roommate's last day of working at the factory.  He, too, is now a retiree.  I thought that I was going to a party, so I poured a drink and busted in like a gangsta, interrupting some formal statement by one of his colleagues.  Oops.  It was a staid affair, I'm afraid.  I wasn't very good at it.

I will scan more today, and the next, and the next.  There is no end to the scanning I can do.  No matter how much I scan, I will never get it all done.  I've been asking around about the number of photographs and old letters and cards and such that other people have.  It seems not so much.  They don't have so many stories, either, in the main.  At least they don't seem intent to tell them.  I will.  I will get started soon.  Should I go horizontally or vertically?  There is no way I can tell the story chronologically.  I will not even attempt.  I will satisfy myself with a random jumping around, a stream of consciousness ordering, associational thinking, if you will.

Maybe.  The road to hell is paved with good intentions, or so Hemingway says in "The Sun Also Rises."  It is, I think, the road most taken.