The Yen, The Itch 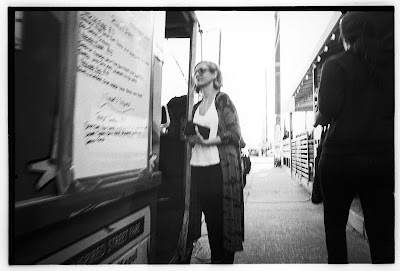 In years gone by, I'd be someplace like Mexico City today having made the flight on Christmas afternoon.  My group of buddies and I would stay in our own hometown to open presents with our families, then, when things were done, we'd head to the airport to hop a cheap flight out of the country.  Perhaps today we would be navigating our way to a village at the foot of a volcano we intended to climb.  This happened many times.  We travelled every chance we could get.  Not just holiday trips.  Many were quite extended.  Back before the tourist crush, in the first days of "adventure travel" before the Golden Horde, places like Mexico, Venezuela, Peru, Argentina, or Ecuador were very inexpensive to get to and cheap once we were there.  Even on my paltry salary, I could manage to live large.

My last big trip was with Ili to Paris for the last Fashion Week in 2019.  We went to Detroit a month after that.  Actually, as I am thinking about it, I had a lot of travel that year.  Since then, I haven't been more than a few miles from home but for a couple drives to the coast.

I am ready to travel if only I can get the vaccine.  But the "roll out" is slower than they thought it would be.  What happened?  I thought Trump had put one of our best supply chain Generals in charge of this.  Perhaps they should have hired Halliburton.

You knew it would be a cluster fuck.  Today I read that one out of every thousand people in America has died of Covid.  I had to look at that several times thinking it was a mistake.  One in one thousand!  From a virus that was going to disappear like a miracle.

So, it looks like it will be awhile before I can travel again.  It is another cold ass morning here in the Sunny South, but it will warm up later and I will get outside.  I spent yesterday inside moping.  I haven't had a shower in quite a while.  I think maybe I've got the blues.  One of my buddies suggested not drinking in 2021.  It's a good idea in so many ways, and I think I should jump on that wagon.  I think we could stay on it until we get to a good cafe in some other town, but you know, travel and drink and romance (or the possibility of it) are irrevocably connected.  I mean, there is, at least, always a drink.  So maybe what we should do is quit drinking and put all the money we would have spent on booze each week into a travel fund.  By the time we are able to go somewhere, that pot ought to be pretty large.  That might be just the thing, right Bud?