Well, At Least the Picture Is Intriguing 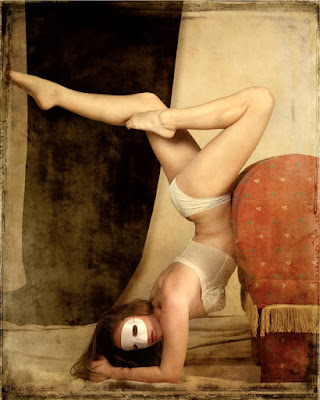 Day one.  I put ten dollars into the travel fund.  Starting is the roughest part.  Continuing is the next.  The thing is, I don't want to be a non-drinker, but I can't continue to be a solo drinker night and day.  I want to be a social drinker again, and, of course, to drink some scotch in bed after sex.  That is the best scotch ever.

I'd start drinking again tonight for that.

I have been feeling "punky" since Christmas and have had a lot of couch time watching television.  That is not at all like me, not during the day, but it has seemed necessary.  I watched "See Know Evil" first, a documentary about a kid who was given some credit for the "heroin chic" look in fashion photography of the 90s.  Q had moved to NYC then and would probably appreciate the doc more than I.  I've always been more of a romantic sissy than a street punk, but I'll recommend it to you anyway.

I started to watch Woody Allen's "A Rainy Day in New York," but I had eaten a piece of gummy candy and that shit creeped up on me with sneakers on.  Yesterday afternoon, I started it again.  First of all--hey, what the fuck?  They are showing that old pervert again?  Didn't he rape his children and make misogynistic movies all his life?  What's up with that?!?!?!

The film did little to dispel those attitudes.  It was a typical Woody romantic comedy with a sentimental boy longing for a disappearing world and old romance bumbling his way through a zeitgeist against which he rebels.  He has a love interest, of course, a ditz whose loyalties are called into question.  Allen inserts a serious scene that might have been lifted from "Interiors" where the mother of the protagonist tells him she used to be a hooker, but the film ends under a clock in the rain where the boy begins a new romance.

The movie is corny, and I wouldn't recommend it but to diehard Allen fans (of which I am one).

Last night, I watched "Jay Myself," a documentary about the photographer Jay Maisel.  I won't describe it.  This film has a very limited audience.

Then I switched over to YouTube and watched more pole vaulting.  I don't know what to say.  It is biological.  It is evolutionary.  You can say it is wrong.  You can, if you are anything like me, shake your fists at the heavens and scream that the cosmos is unjust.  You can take to the streets to twist and shout.

But then you go to sleep and wake up wet or with an erection and and as much as you try to think pure thoughts, like Martin Luther, you must take the cat of nine tails to yourself and whip the twisted thoughts away.

What?  No!  Just walking down a beach at sunset holding hands.  You were kidding, right?

Thus has begun my post-Christmas season.  I just needed to get a jump on the new year.  This year I must be more productive.  It would be almost impossible not to, but I could devolve.  I am capable of that.  If Trump would just get that vaccine to me, I know I'd get good again.

Until then, it is just me and my attitude, a healthy diet, an abstaining from drink, and constant motion.

We'll see how that works out.