Workers of the World 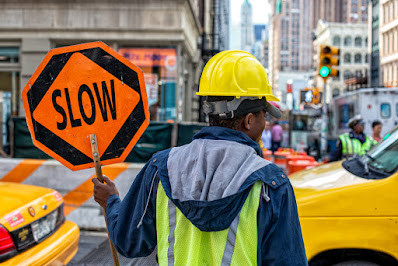 My Fixit's days are soon over for awhile.  Thursday is his last day until sometime next year--if then.  He says he doesn't want to do this kind of work anymore.  I can't blame him.  It is hard, back breaking, knee ruining work.  He comes straight as an arrow in the mornings, but by day's end he is bent and stooped.  Each day, I feel it is something that I have personally done to him, and I am filled with guilt.

Almost every day these past few months, I have gone to a Home Depot or a Lowes and stood around with working men, big of bone and hand and forearm.  I watch as small Mexican men move great things I can't with little apparent effort.  These are not gymroids.  They are men who have been thickened and strengthened by doing physical labor.  I try to read their faces.  They are not as expressive as mine.  Those are poker faces for the most part, some marked by anger, others by disappointment, but all stoic by and large.
Doing what I have been doing these past two months, I have become acutely aware of how many such men there are, and I've begun to wonder at the actual number of people employed in the construction trades.  Road workers, landscapers, roofers, carpenters, masons, general laborers--they must comprise the country's largest army.
Mr. Fixit wants out.  He wants to travel.  He wants to paint.  He wants to be a cafe sitter or an avenue walker.  That is what he believes.
But a fellow has got to make a living.
Each day, driving down the highway in the work truck, I observethe businesses that line the road.  I wonder about the people who work there every day, invisibly but certainly.  Most of the jobs require no specialized skill that can't be learned on the job.  How many people work in restaurants?  As bank workers?  How many people are receptionists or working in retail?  Wages without benefits, irregular schedules, insane or stupid supervisors.  This is the second American Army.
I've been paying greater attention to this than usual.  Mr. Fixit's daughter is a baker in a French bakery.  I wonder how long the gig can last.
One can only ponder why they love the capitalist system so very much.  Why would they not embrace some form of socialism?  But they don't.  These are, in the main, Trumpsters, conspiracy theorists, the backbone of QAnon.
They seem to work against their own best interests.
My own life has been so very different.  Unwittingly, I became part of the career class.  Not an elite, but a job with benefits.
Every job should have tenure.  Every job should have benefits.  I abhor the capitalist conditions that oppress the working class.  It thrives by keeping people insecure and at one another's throats.  It is how an elite class survives.
That is what I've had to think about as I work with Mr. Fixit who is making more each month than I ever did in my best years.  Now of the retired class, I tremulously watch my savings dwindle.  I can tell they won't last quite long enough.
Insecurity sucks.
I am tired, however, and not capable of the work that needs to be done.  Still, next week, when Mr. Fixit is gone, I have much work to complete.  There is a dozen yards (at least) of mulch to order and spread.  Ili and I were able to do it in less than a day.  It will take me at least two.  I have yard work to which I must attend again.
With Christmas less than two weeks away, I will use some of my free time to try to connect with a few friends.  Outdoor lunches, patio drinks.  Mostly, though, I simply want to rest.  I am full of the weariness and worry of the aged.
Posted by cafe selavy at 7:27 AM