Djinns of Smoke, Genies of Hope 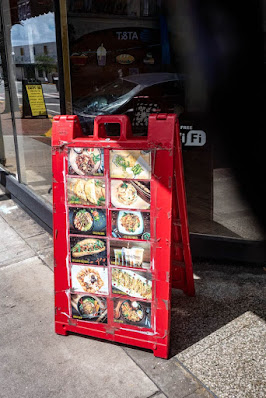 The air was pungent last night after I closed up the house.  I had the doors open all day to air it out.  But the carcass beneath the floors must have been reaching its bloated maximum.  I had eaten early, had a sushi dinner delivered early while the sun was up, and as the sun went down, I sat outside to watch the giving way of the daytime creatures to the night.  Birds went to roost and bats took over the pale sky.  I got up to walk around the street to the front of my house.  I like to look at it from the outside with the interior lights aglow sometimes just to see.  Coming back across the yard, I could discern something on the roof, but in the dark it was confusing.  As I approached it gingerly, not certain if it was something that might leap, I saw it was the neighbor's cat.

"How in the fuck did you get up there?  Really?"

He just walked to the edge of the roof, looked down, and meowed.  If you want to know the difference between males and females, look no further than cats.  My friend had a gay cat once.  He was like stereotypical.  I don't think cats have an identity politics problem so much.

I walked back to the deck and returned to my chair, and in a few seconds, the neighbor's cat was lying at m feet.  I had no idea how he had gotten down.  Just then a flock of something flew over emitting high, chirping sounds.  Bats?  It had to be.  The door was open and my tenant had to go through the rabbis shot sequence because one flew into her and scratched her face one evening.  I didn't want any bats flying into the house.  That was it.  I closed up shop for the night.

But with the doors closed, the smell was abominable.  What to do?  I'm not the sort of person who has those Glade plug-ins around.  I wished I were.  I would have had them in every outlet.  Time for hippie shit, I guessed.  It was all I had.  I lit bowls of essential oils and lit a dozen incense sticks.  Within minutes, the house began to smell like an Indian brothel.  I sat on the couch in the half light and watched the wisps of smoke rise and dance, each taking a different form, some rising straight into the air, some swirling into little phantom genies.  It was hypnotic.  I couldn't help myself.  I poured a tiny scotch and sat entranced until the first group had burned themselves out.  Djinns, I hoped, would grant my wishes and make me well.  Maybe they'd do more and bring me my own true love.  It seemed easy to believe in such things breathing the heavy, exotic air altered of the moment.

I watched a little television, but the day had seemed a long one and I was truly zonked, so just after nine, I made my evening ablutions and went to bed.

And again, I slept well. . . every hour.  It has gotten to be my standard now, sleeping well an hour at a time, after which I get up, drink some water, shed some, and go back to bed.  I don't let it stress me any longer.  I just roll with it.

Such dreams last night. Some are not dreams, it seems, so much as a mental working out of the psyche, real life situations remembered or relieved or analyzed.  Sometimes I am guilty, sometimes others.  Nonetheless, I am grateful when I roll over and look at the clock and see that it is a decent hour to rise.  The darkness is not so pitiful with coffee.

I have watched the "news."  It is silly.  Pundits and speculators.  CNN feeds some hopeful liberal dream, Fox the other.  Of course Trump will not be convicted in the Senate.  I could mount this defense.  It is easy.  The democrats will make a forceful argument that an insurrection occurred.  No one on the Senate floor will disagree with that.  They will all agree that it was an ignominious day in history.  What will not be proven, however, is that Trump was responsible.  The burden of proof is just too great.  His tweets and speeches will not be enough.  Without documents or phone records that directly tie him to some plot, the trial is truly a public stunt.  Democrats will get to stomp their feet and hold their breath, but I don't believe one of them thinks there will truly be a conviction.  And Trump will have a public platform back before you can say Jiminy Cricket.  Facebook is already looking into it.

Meanwhile, Biden's political problems have already begun.  The far left is biting at his ankles, the far right taking a bludgeon to his head.  I have to give it to him, though.  He surely has disproven Fitzgerald's proclamation that there are no second acts in American lives.  Biden, the plagiarizer, has surely disproven that.  You just have to live longer than Fitzgerald did.

The sun has barely risen.  It will be cloudy all the live-long day.  The mood this morning is soft and gentle.  It might be good to snuggle with a book, to read a little and to nap, to wake and read some more. . . .  It is a good day for some menstrual music.  "Jazz for a Rainy Day" sort of stuff.  YouTube and Apple Music have just such channels.  A lazy Saturday.  Nothing to do but roll up in it and drift away.