I Grew Up Playing Tarzan 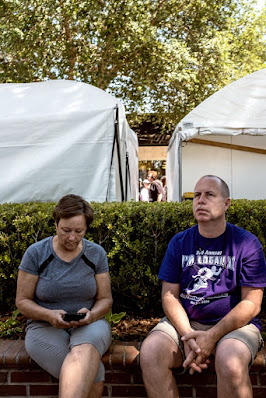 Yesterday C.C. asked me if I had seen the 1931 movie "Trader Horn."  I hadn't, but I began to do a little bit of Googling.  Now it is a must-see.  Everything that could go wrong in making a movie went wrong in making that movie.  They shot most of it in Africa where crew were eaten by crocodiles and killed by charging rhinos.  The female star got so sick it took her six years to recover her health.  And if that is not enough, the story is insane.  It is the kind of stuff I grew up on, white people going into the world seeking exotic adventure.

I tried to find the film online, but it isn't there.  I found trailers on YouTube, and I found this (link)--"The Blonde Captive," made the same year.  Of course, I watched it.  White people used to be crazy.  They'd run off into inhospitable places just to find things.  Of course, they had something they don't have now, a profound sense of cultural and intellectual superiority.  It made them braver, perhaps, than they might have been otherwise.  Thinking God favors you does give you a bit of an edge psychologically.  Plus, you know, white societies were much more technologically advanced, so they had that advantage, too. They never went into the jungle only to find that the natives had advanced warning systems and ray guns.  Poison dart blowguns and boomerangs were about it.  And, of course, cannibalism and the worship of the darker, lesser gods.  Sure, there were things to fear from the Pagans, but in the end, good old Yankee ingenuity would prevail.

It was a different time, another world.

I've been reading in the Norton Anthology of World Religions again.  Boy oh boy, Christians were sure hard on one another.  Hard on Jews and Moslems, too.  But you didn't want to be a Protestant in a Catholic country or vice-versa.  They did terrible things to one another and fought long and brutal wars.

My surgeon brought that up the other day when I visited his office.  "In the Middle Ages," he said, "if you got a wound, your body either fought off the infection or you died."  I don't know if he thought he was making me feel better or not.  But yea, imagine the crazy injuries soldiers got from sling shots and arrows and boiling oil and swords.  And still they fought.  But it wasn't just them.  The same happened in every culture around the globe.

Human life has never been so precious as it is today.  We never talk about the little people on the bottom of the evolutionary totem pole.  Everything is good.  Everything is equal.

I don't think cancel culture is going to work with the right wing militia.  AOC is going to have to rely on someone else doing battle to keep her safe.  She's not feeling that so much right now.

My mother wondered yesterday how all this suddenly happened.  The armed rebels, she meant.  I told her it didn't.  We have allowed them to go on and swell their ranks for decades now.  Remember Timothy McVeigh, I asked her?  Remember Waco and Ruby Ridge?  My old gym was full of those people.  Gun shows and conspiracy theories.  They had dropped out of the mainstream long ago.  They were part of an entirely underground economy.  They were leaving no paper traces, as they used to say.  I could buy just about anything I wanted in the back room of the gym as long as I paid cash.  No, I told her, this was not surprising.  It has been growing for a very long time.

Oh, yes, and there were many law enforcement people involved.  You shouldn't believe that they are not involved in conspiracy theories, too.

It's not all UFOs and Big Foot.  Those guys are armed to the teeth and have a good supply of exogenous testosterone at their fingertips.  They are ready to beat the dark hordes back into the jungle.

They like hog hunting and air boats and swamp buggies the way some people like art festivals and a good glass of wine.

Well. . . that certainly went off the rails.  I have no idea what I'm saying at this point.  You will have to make your own connections.  I'm pretty sure they are there if you can find them.  Something to do with white people and shifting liberal values maybe.  I don't know.  I grew up playing Tarzan with all the kids in the neighborhood.  I don't think kids do that so much any more.