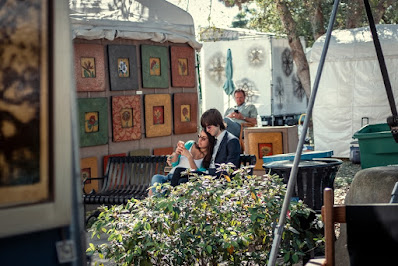 I must have been exhausted.  By what, I haven't a clue.  I do nothing, really, but maybe it was some sort of worry fatigue.  I spend a lot of energy on that, I guess.  As you know, I was up early yesterday morning doing the usual routine, but after writing, I went back to bed and slept another couple hours.  When I got up, C.C. had sent me a picture of his morning quiche.  It made me hungry.  It was then that I realized I had done something the day before that I've never done in my life--I'd bought toaster waffles at Whole Foods.  An omelette and waffles sounded like just the thing.  And it was.  Those toaster waffles were pretty good, especially smothered in maple syrup.  All that was missing was a mimosa or two.  Still, the food made me sleepy.  I went back to bed.

I didn't get up until after one.  I was just zonked.  Once up, I thought about drinking beer for the rest of the afternoon.  That sounded really good, but I had told my mother I would make us a fish stew.  I wasn't sure about that now.  I opened a beer and watched another travelogue of the exotic east (link).  The narration was marvelous, suggestively "poetic" and delivered in the tones of Groucho Marx when he is being faux-serious.

Then it was three, and I decided I would make the fish stew after all.  I made a list of ingredients on my phone and headed out--carrots, celery, new potatoes, an onion, parsley, garlic, clam juice, crushed tomatoes, anchovies, and a load of cod.  As I was shopping, I saw a buddy of mine, one of the twins I've known forever, and he was talking to the people around him and pointing my way.

"What do you think of that fellow's blonde hair," he was saying.  I don't know why, but my hair has gotten blonder as it has gotten longer, and it is really long and blonde now.  The other day, walking down the boulevard, I was accosted by a black man on a bicycle who was sitting still talking to another black fellow sitting on the sidewalk.

When I got to where he straddled his bike, I laughed and held up a finger.  "You're a funny fucker, my man.  I've got your autograph right here."

I was laughing.  I guess I have started to look like a professional wrestler.  Gorgeous George, maybe.

When my buddy finished haranguing me to the shopping group, he came over and said, "I saw you yesterday driving by the Country Club College soccer field.  You must have been going to see your mother.  I was driving behind you, and at first I thought you were a blonde woman."

"Fuck you.  Let's go out together and see what the girls like better, your dingy gray or my beautiful blonde locks."  I gave my head a gratuitous shake.

"Oh, no doubt, no doubt," he said, then to a lady passing by, "Hey, do you like his blonde hair better than mine?"

It turned out to be a woman I know, and I watched her eyes dancing above her mask, unsure what was going on.

"Hey, Chris, don't pay any attention to him.  I hate my friends."

"She laughed and waved as she moved on.

I'll be able to go to the beautician soon.

The fish stew turned out to be more work than I had counted on, and the afternoon was fleeing.  By five, however, I had a pot of stew fit to eat.  I drove it to my mother's with a couple of beers and some good French bread.  Old mom likes my cooking, especially since it means she doesn't have to.

"Soon, mom, we'll be able to have our regular meals together again."

Since the pandemic, she has kept me out of her house.  It has been fine, really.  Once I am back in, I will have to watch shows like "Naked and Afraid" with her after dinner.  Maybe not, though.  We have gotten used to the outdoor world with jazz on the radio and the birds and snakes and lizards for entertainment.  Perhaps we will stay away from the dreaded t.v.

I didn't get home until dark. I cleaned up the kitchen and got the coffee pot ready for the morning.  I had something to write that I wasn't sure of.  A big glass of whiskey and a little cheroot on the deck while I thought about things.

I was still tired having never really woken up all day.  Maybe a few more travelogues or another art documentary, but an early bed was in the offing.

When I woke in the night, everything was dead.  The electricity was out.  No fan, no air filter, just the slight sound of rain on the awning.  My mind wrestled a bit with something troubling it, but I fell asleep again until morning.

And now, it is February, the briefest month and truly the last month of winter in this subtropical land.  I will be immunized against all Covid but the newest form by the time spring fever begins to bloom.  Supposedly I am 80% immunized right now.  I thought yesterday that I wanted to go to Hawaii and to the islands of Poly- and Micronesia.  Perhaps I can crew on a large sailboat that is going that way so as not to spend money on airfares and hotels.  A two week crossing of the Pacific, then smaller jaunts from island to island.  Perhaps I'll end up in old Tahiti or Bali of the pre-war years.  As long as I don't make the mistake of looking online for contemporary travel videos of those places now, I can hold out hope.  I don't want the Bali of jet skis and parachute rides and sleazy beach bars full of rich tourists anxiously waiting to be blown up by Moslem terrorists.  I'd rather worry about the headhunters of Borneo or the primitive tribes of old Burma.

But first, I'll get a place on the beach with my mother where we can eat fish sandwiches and drink beer and loll about with sugar sand beneath our feet.