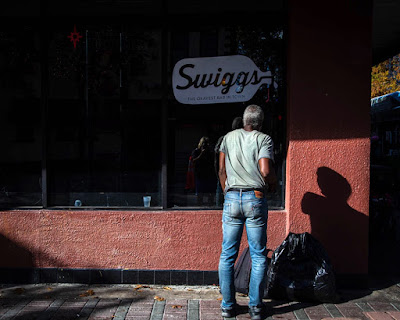 Last night, I took a scotch to the deck to smoke a cheroot.  Yea, I know.  I had two, but that is all.  And I only smoked half of the cheroot.  While I was sitting there, the cat came out from under my car.

"Why hello, kitty.  Is that where you are staying now?"  She was walking tenuously across the granite gravel.  Then I saw why.  A young raccoon was making its way toward her food dish.  Not liking that, I looked around for something to throw.  The only thing at hand was a small clay pot which I threw as well as I could.  Missed the coon by quite a bit, but the pot shattered into shards.  Both the cat and the coon took off.  Why'd I do that, I wondered?  Why'd I break a lovely pot?  It was one that Ili had bought and that had sat empty since she left.  Maybe it was the whiskey.  Maybe not.  Well, that was done and over.  I felt bad about it, but it was another piece of Ili out of my life.

Perhaps it was unconsciously intentional.  As I have mentioned previously, I am blind to things that decorate my house as I seem to have a Victorian penchant for collecting.  Every time I clean, as I had that morning, I remove more of the old Ili flotsam and jetsam.  Not just Ili's, either.  I am still finding things that belonged to my wife.  I keep reminding myself to throw something away every day.

Last night, I couldn't sleep.  My apnea, I believe, is caused by postnasal drip which seemed prevalent last night.  And every time I fell asleep, I woke to a sharp and sudden pain in my right knee.  I'm not saying an ache.  I'm talking about stabbing, searing pain.  I have really fucked it up this time, I'm afraid, but I still want to try to rehab it on my own which is difficult without a gym.  But I am tired of doctors.  Propping my knee and lower leg up on a pillow helped, but that meant lying on my back so that mucus dripped down the back of my throat and I would wake choking.  And having switched to big mugs of herbal tea after my second scotch, when I woke up, I had to pee, so I was up and down on my sore, stiff leg.

Have I made myself attractive to you yet?  Well, that was what I was thinking while I wasn't sleeping.  What a beauty I am.  Truly, who would want this carnage of physical dilapidation?

And then I would drop off into a thinking dream, and often it was of Ili.  We had bee apart for about three months before my accident, but just before, the night I was readying myself for a little trip to Palm Springs and L.A., she showed up at my door.  To this day, I have no idea why or how, but I had just finished packing and was about to go and get some dinner on the scooter.  I asked her if she wanted to come, and she slid behind me on the double seat just as she always had in the old days.  As we tooled through the last of the long days of early autumn, she held on tight and pulled her body nostalgically against mine.  We went to a good barbecue joint that we used to go to from time to time and the owner remembered us and came over briefly to chat while we drank a beer and waited for our takeout.  Nothing seemed to have changed about the good part of our relationship.  Everything seemed normal and natural.  Back home, while we ate, I suggested she come with me.  I checked airfares and found she could get a ticket on my same flight for less than had I paid.  I'd already booked the hotels, I said.  All she needed to do was throw some clothes in a bag and come along.

She was a little wild eyed at the idea, and I thought she would come, but there was some switch turning on and off in her brain, I could tell, and as the night wore on, I said that I needed to go to bed because my flight was very early in the morning.

While I was in Cali, I texted her pictures and she wrote she wished she would have come.

It was the weekend I got back that I got run over on my little scooter.  In the emergency room, after they had put in my chest tube and had me stabilized, I made two calls, one to my mother, and one to Ili.  Ili didn't answer, and I left a message saying that I had been in a bit of an accident and would probably be in the hospital for awhile and might need a little help with things like mail and bills and work.

The next night, she showed up at the hospital and stayed with me all but one night while I was there.  I was in bad shape, of course, and had oxygen tubes in my nose, a catheter up my urethra, an IV in my arm, and a chest tube draining blood from my lung, and I went a little mad for awhile, I am told.  I remember little of that but the crazy dreams that seemed so real and waking and urgently trying to tell people about them.  I wasn't eating and my mother says the doctors had gotten worried.  They said to keep the curtains open and to get me out of bed.  What I remember of those days is that Ili had brought things to decorate the room, crystals, I remember, which she said would help me heal.  She brought a speaker and I remember the purple evenings and the lights from downtown coming through the window and the old jazz wafting through the room.  I remember the nurses being impressed and saying they would like to stay with us for awhile.  Ili would sit and hold my hand, and though I wasn't eating, which I believe was an attempt not to get fat lying in bed, I was drinking water like mad trying to rid my body of the chemicals they were dumping into me, and I would ask Ili to come and hold my peter in the jar so I could pee.  "This is the only fun I have in here," I said.

And I remember ringing for more morphine which I watched them shoot into my arm with great wonder.

These were the things I thought of in the sleepless dark last night.

I learned much later that Ili had another boyfriend those months we were apart.  It was someone she used to mention to me as a friend when we were together.  His wife left him and their young child and Ili had taken up with him.  I learned this when she was angry at me.  She had a family, she said, and I had taken her away from it.  I had ruined her life.

I was remembering that, too, and wondering why she had come to see me before the accident as I was packing for L.A.

Nights can be cruel, of course, and can, I imagine, become a time of fear, but I was not unhappy with these thinking dreams but simply ponderous.  I wondered if throwing the little clay pot had conjured up these vivd memories.

Just so you know, I overcame the madness, and I was never as sad as I was embarrassed and ashamed that I was inconveniencing so many people so much with my injuries.  All I thought about was getting better, of getting into rehab and rebuilding my health.  Though I was near enough to death, it never really seemed so to me. . . but that could have been the morphine by and large.  It sure was sweet stuff.

This morning it is cold, but the cats were there as the sun came up, and I took the feed bag out to satisfy them.  I looked out and saw the broken clay pot laying where I had thrown it.  I will clean that up later and throw some other things away as well.  God I've got a lot of stuff that I don't even think about until it comes to my attention, and then I'll pick it up and hold it in my hands and will be suddenly and irrevocably flooded with memories.

I begin to understand more completely, I think, the way of zen, the ridding one's life and self of clutter, but I am torn.  I whine a lot, as you know, but it is mostly about the present, not about the past.  Those things buoy me.  They are markers that are both anchors and floats.  They are points on a chart to aid safe navigation.