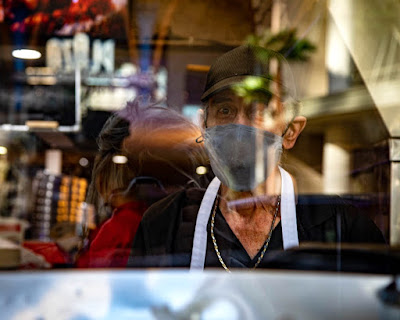 I woke before five again.  I have read the papers which were pretty much what they were the day before.  Perhaps updates come later in the morning.  Now in the blackness before a Sunday dawning, I listen to the humming of the refrigerator and the grumbling of my fat belly, and I think about grabbing my camera and heading out for a drive to find lonely buildings lit by the side of empty highways.  I think about it, but I am paralyzed by habit, and so I sit illuminated by the cold Xenon light of the computer screen, fingers thudding on cheap plastic keyboard keys designed by Apple.  To what end, I wonder?  What possibly can I draw from my life limited by pandemic fear and isolation?

I could show you a belated New Year's card I cooked up from the Playboy years and sent to a handful of friends.

It was a cloudy, blah day, and I took advantage of the daylight time spent indoors to fool around with pictures.  This was a different way of cooking, so to speak, a different treatment than I usually employ.  It is blanched rather than saturated, wiped of many features.  I've learned some things over the years.  You do not want much contrast with color, especially in portraits.  Thusly, I was able to create the look of pinup calendars from the past, the sort of thing that used to hang in the backroom of filling stations and barbershops everywhere.  Long gone.  Nobody dare put up such things in these enlightened times.

I've been doing well with my alcohol consumption, and it is beginning to show.  Yesterday, however, I went a bit overboard.  I hung around the house in a funk all morning, and it wasn't until noon that I did a workout and went for a painful walk.  My right knee is getting worse instead of better, and I'm sure it is a torn meniscus.  I tore it once long ago, and it took a long while, but eventually it got better.  Then I tore the meniscus in my other knee and had it "fixed."  I am going to try to rehabilitate my right knee again, but walking yesterday was painful.  Sleeping is even more so.  There are very few positions I can put my knee in as I lay prone, and I am an "active" sleeper, so I wake up quite often with a searing pain.

But I wander.  When I got home from my walk, I showered and made lunch and wondered what to drink.  What the hell, I thought, I'll fix a mimosa.  That's not even a drink, really, just a suggestion.  And two is better than one, and three, well. . . that might just add up to something.  Later, with dinner, I drank half a bottle of wine, and then I poured a scotch.  It was imperative to have a second out on the deck while I smoked a little cheroot.  I realized what I was doing, however, when I headed once again for the liquor library, and stopped myself short.  It was still early in the evening.  I was bored and antsy.  I was on my way to another one of those brooding, scotch filled nights, but I pulled up short and put some water on to heat.  I spent the rest of the evening with McCarthy's book of men and hideous death and large mugs of tea.  Today, the sabbath, I shall practice temperance.  I can have a drink if I wish which makes it easier rather than harder not to drink.  I have come to realize, however, that the brooding and the drinking have become somehow inevitably intertwined.  I shall try less brooding for a spell and see how that works out.

I've been watching way too many interviews with Truman Capote on YouTube in the past few weeks.  I am finding him fairly fascinating.  When I was young, I thought him a horrible affectation, but I now can see I was wrong.  He wasn't formally educated, but he was smart and he was thoughtful.  Early on in his career, he was quite graceful, but inner torment and and drug and alcohol consumption had their usual effects, and like so many others, as he aged, he lost his ability to set his writing in order.  But even in his bitter years, he was fascinating.  I fear I have watched him so much, however, that I am taking on some of his mannerisms.  I believe, at the least, that I can do a pretty good impression of him now.

Just as an aside, I've always wondered about the apostrophe in "Breakfast at Tiffany's."  Of what is Tiffany in possession?  Tiffany's dining room, I think, but you never hear anyone say "Tiffany" but always "Tiffany's" as if that were its name.  O.K., I thought, people are hillbillies.  But in a Maysles Brothers documentary made in 1966 (the same brothers who made "Grey Gardens"), Capote refers to Tiffany as Tiffany's several times.

And so it has become.

I started to write one more anecdote, but I realized it was way off color and likely to offend even my screwball readers, and I found that I was beginning to flag and have decided to go back to bed.  It is a cloudy morning with no sunrise and a prediction for rain.  I will sleep and stick to wholesome drink and see if I can't stretch and meditate a little later in the day.  Vaccination day is coming, and if I can rehabilitate my knee so that I can walk without agonizing pain, a little freedom is right around the corner.  I just need to sit tight a bit longer.

And so, good morning and goodnight.  A little more rest will do me good.