A Super Bowl for the Aged 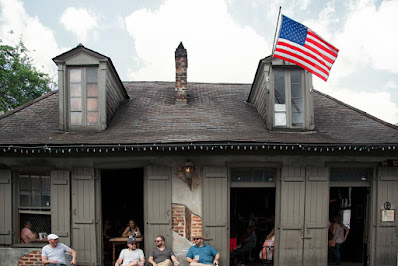 Sure, sure. . . I watched it.  What can I say.  I've seen them all.  I couldn't just sit one out.  So I went to Popeye's Louisiana Kitchen (I took this photo in Louisiana) and got a four piece dinner--a wing, a leg, a thigh, and a breast--spicy, with fries.  I wanted to get some Bass Ale, but the grocery store didn't have that nor any other British Ales.  I bought Guinness instead.

I brought everything home to party with the members of my immediate household.  I fed the cats and laid out the feast.  I had eaten it before the Covid Bowl actually began.  I haven't had Popeye's chicken in the past year, I know.  Before that, I'm not sure.  Wait.  I may have had it last Super Bowl.  Surely I did.

There are breaded chicken crumbs on the dining tray yet this morning.  That's how you know it was a party.  And sure as shittin', it was really, really good.

I set the DVR recorder thinking I would watch something else for about an hour then put on the Covid Bowl and fast forward through commercials.  But I didn't.  I watched the entire catastrophe.

I don't mean the game was a catastrophe.  It was just football.  What can you say.  They run, they pass, they tackle, and sometimes they score, one team more than the other.

But I've never seen so many commercials in my life.  And bad ones.  Everybody tiptoes now.  If you have something to sell, now is not the time to be controversial.  Respect.  Reverence.

And what the fuck was that at halftime?  Yes, I watched that, too.  I'm always waiting for the "wardrobe malfunction."  But I never did figure out what was happening last night.  It was like "Mars Attacks."

But if you had money on Tampa Bay last night, you definitely beat the spread.  And if you are older, you probably pulled for Corporation Brady.  I don't know. . . I mean, it is kind of amazing.  I like Mahomes, but it wasn't his night.  He just took a bad beat down.  He'll be back, I'm sure, but he will never be as young, and that, I think, makes quite a bit of difference.  This was a Super Bowl for the Aged.

My college roommate and colleague suggested that there was an NFL conspiracy to have Brady win.  White Boy.  Trump supporter.  Hmm.

I take my mother for her second Moderna shot today.  We are excited about that.  But we are both wary now of the mutants.  Seems the CDC wants us to stay home forever.  No matter that the number of deaths from Covid are dropping daily, they say it is just the eye of the storm.  I am definitely the most cautious of my friends. I am going to have to get some acid for my mother and myself to get the old juices flowing.  Something.  I can't continue like this any longer.  We'll travel one way or another.

But what the hell.  It is another cloudy day with chances of afternoon rain.  I am feeling much better, the after effects of the vaccine having passed.  I still have the rest of it, though, the whole Covid Lockdown Syndrome.  And I've been too much alone.

I could see a "therapist" or a life coach.  That's what people do now.  They don't go to "shrinks."  They talk about therapy.  I don't think I could do it, though.  I'd piss them off, I'm sure.  I would argue and attack their reasoning and assumptions.  That would be fun, but I don't see the point in paying for that. Paying to piss someone off?  I seem to be able to do that for free.  It is a peculiar talent of mine.  Something I'm good at.

Maybe I am better off in isolation.  Or, rather, other people are.