Driving Far to the Same Place 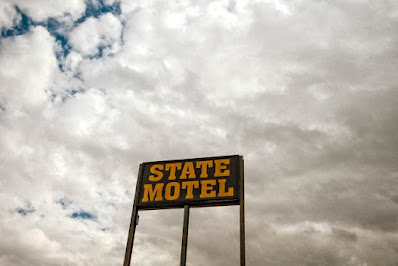 I did it!  I hit the highway yesterday.

I had forgotten a lot of things.

I left the house around noon.  I had decided on a baby step, so I headed out to one of the tourist areas at the far end of the county.  It looked to have potential in the four trips I took to get my mother's and my Moderna shots.  I remembered those grand distances and blue skies and great monuments of tourist delight rising to meet them.  I'd forgotten, however, that things from a distance often don't photograph so well and that getting close to them is sometimes almost impossible.  Parking is always a problem, then there are fences and highways and large swaths of swamps and woods in the way.  Power lines and service trucks and all sorts of other visual rubbish become obvious, too.  In isolation, distances and the time it takes to travel them is condensed, but on the road, half hours are the common denomination.  Before you know it, the hours have flown by. 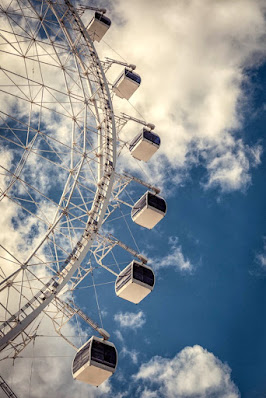 I parked and walked and ended up in some weird little amusement place.  I took a couple of pictures before I realized I had not put on my mask.  There were others without masks, but they weren't carrying a camera bag and a bazooka of a camera across their shoulders.  As always when I have a camera in hand, I was getting suspicious looks. 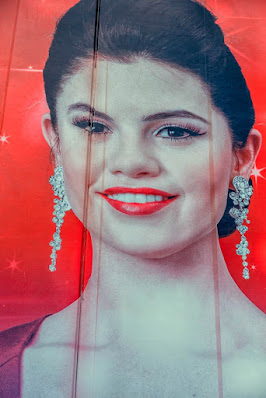 I headed back to the car.  I'd forgotten how heavy my Canon DSLR is, and how clunky.  Compared to my other cameras, it is just too much.  It is a great camera, but not to carry.  My little Fuji and Ricoh cameras weigh less together than just the lens on the Canon.  And to think that I used to carry that thing through the streets of NYC and San Francisco taking candid photos.  It is unbelievable.

When I got to the car, I decided to abandon this spot and drive further down the interstate to a small town that used to house the Barnum and Bailey circus in the winter months.  Decades ago, once you got off the interstate, things got interesting real fast.  It was a redneck town, weathered and withered in the great southern heat and humidity.  I thought I'd see something there.

I was wrong.  Like every place else in my own home state, foreign settlers have moved in and development has blown up.  The roads were jammed and travel was a slow crawl past the the same cheap shopping developments built in the same cheesy way that you see in every other newly growing town, and endless string of Bob Evans, Culvers, Popeyes, Dollar Tree, Big Lots, Walmart. . . .  All the necessities for modern times.  Giant roads leading from new housing developments intersect at red light after red light.  The half hours tortuously drift by.

On the almost outskirts of town, however, I did spot one of those old motels that had not been sold for development yet, one of those places that houses criminals by the week or month, a horrible mustard colored prison with a toxic swimming pool appropriately named "State Motel."  I parked my car and headed off with cameras knowing what might happen as it always does.  Somebody was bound to come out of the office or a room and want to know what I was doing, and since I was creeping around on private's property, I would be susceptible to whatever harangue I was to receive surely from someone with a body full of tattoos and a meth hangover.  These cats don't want anyone taking pictures of their license plates.  I've learned that the difficult way.  I got a few photos and was headed deeper into the parking lot to photograph a ramshackle camper, some antique of a wreck in faded sea foam green parked in the further recesses, but I got caught mid-parking lot, cameras in hand, by a fellow coming out of one of the rooms.  I made a turn and headed toward the highway with him watching my every step. 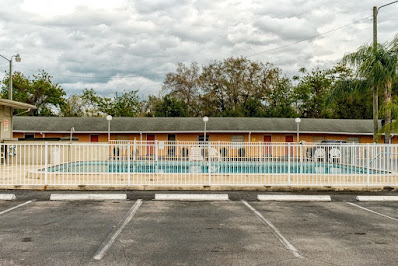 Back in the car, I looked at the time.  The day had slipped past with hardly a photo and I would have to hurry to make it back to town and to my mother's where I was expected for dinner.  I nosed the car back onto the slow, torturous highway.

The road, I thought, ain't what it used to be.  But I knew that having spent a year in lockdown, my sense of time and distance had been greatly impacted.  I'd become habituated to the distances of the house, the yard, the community.  Car travel in my state is long and hard and full of sameness.  I will have to get far out of my zip code--no, area code--to find much of interest. 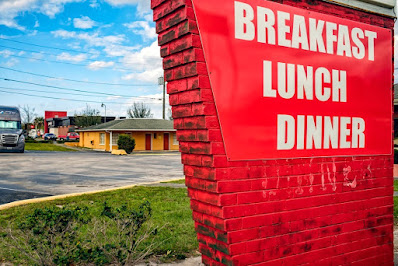 Obviously, I didn't find it yesterday.  But maybe I'm just out of practice.  More likely, however, I have become a Bobo shit.

I'll work on it and let you know.