Ferlinghetti, Woods, and the Invasive Species 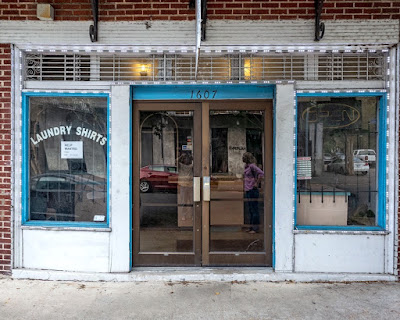 The State of America: Tiger Woods automobile accident took over last night's news.  Commercially, I guess, it was a winner.  It was what mattered most to most Americans last night.  Who gives a shit?  Yet I found myself watching the coverage over dinner.  I was, I guess, reliving my own accident.  Being taken to the trauma center rather than the nearest hospital.  Being "packaged" and put on a body board.  Getting metal put in to shore up your body.  Etc.

Otherwise, I mean for anyone who had not personal interest. . . why?  Is it really important to people that he plays golf again?

Meanwhile, hardly anyone noticed this. 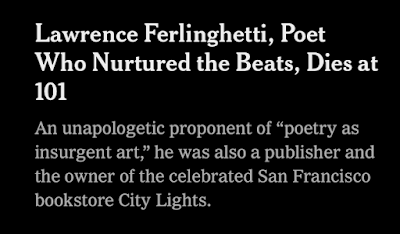 Was Ferlinghetti a good poet?  I never liked reading him.  But was he an American icon?  Well fuck yea.  Any trip I've ever taken to San Francisco always included a pilgrimage to City Lights Books.  I've been going since 1975.  Ferlinghetti hung around for a long time and was apparently lively 'til the end.  The loss is significant to me.

I didn't see anything about it on the evening news.

Here is a wonderful tribute, however, put out today by the N.Y. Times.

Funny to me. . . I don't think I ever took a photograph inside City Lights.  I don't think I have a single image.  Weird, that.  Last time I was there, though, I bought Ili and I some books.  I spent money there every time I went.  There was always more than I could carry home that I desired, though.  And now, it is one of the few bookstores left in S.F.  Crazy, right?

I wonder how many golf shops there are?

This is not what I had intended to write about this morning, however.  I am like a news channel, eh?

Update: This just scared the shit out of me hopping across my floor. 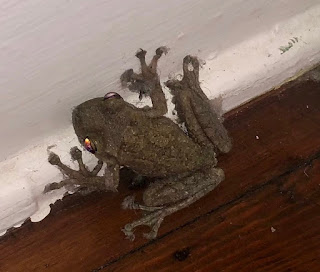 He is huge!  I don't want to deal with it, but I will have to.  This is an invasive species in my own home state and they are doing much ecological damage, or so I've heard.  The agricultural school of my state's major university has this to say:

"Cuban Treefrogs are pests, but they are living animals and should always be treated humanely. We recommend a two-part method to humanely euthanize these frogs and ensure that the method was successful. ... The frog will become comatose within about a minute, and will soon be euthanized."
I can't do it, though.  I can't kill it.  I don't know what I'll do yet.  For now, he is just hopping around behind the t.v console looking for a way up or out, I'd guess.  Problem is, these frogs shit like a baby goat. They leave big turds everywhere.
Jesus, today's post has take a horrible turn.  This is not at all how it was supposed to go.
What I wanted to write about is how good I felt after my first aerobic workout at the gym yesterday, a climb on the inclined treadmill and some elliptical training after.  I got my heart rate up for a sustained period for the first time in months.  My head cleared and my body felt more alive.  Shoot--I was almost happy.
And today, I have a luncheon date with a woman from the factory who says she needs some career advice.  It is quite something to me, really, that she would ask.  As a matter of fact, she is the second person from the factory to come to me this week.  I spent over an hour on the phone with another administrator who wanted my take on an uncomfortable situation.  You wouldn't know it from the blog, but I have a good head on my shoulders.  It is wonderful to still feel of value.
And even though I was an administrator, someone put my picture on the union recruitment page.  I was informed about this from one of the workers at the factory who sent me the link.  I was so pleased I sent it around to friends.  Bragging, sure, but it felt deserved since I put my own career in jeopardy early on in instituting a union.  "Tribute," I wrote.  One of my former department members, however, had a severe reaction to them using the image of a "boss" on the page.  I had a severe reaction to her's.
We no longer communicate, but my image is still there.
Holy smokes, this has become just a jumble.  I was simply going to write about how happy I was yesterday and how much fun it will be to eat out with someone today.
But that's how it goes, isn't it?  The news and an invasive species can send you flying in an unintended direction.  I didn't even get to the part about my dreams.
Whatever.  The sun is shining and lunch will be good fun.  It will put a smile on my face for a minute or two.  I'll take that.
Posted by cafe selavy at 9:10 AM