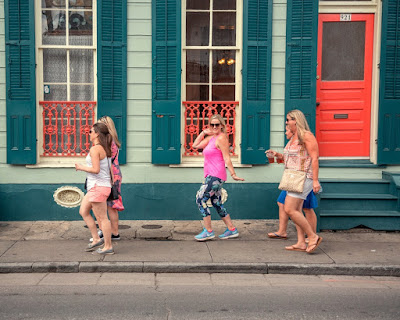 What does one do when one is single on a Friday night?  During the Time of Covid, that was a sad no-brainer.  But now. . . well. . . there is a different vibe.  No matter where you are, I imagine, the creeks are starting to flow and the sap is starting to rise.  The advent of Spring is in the offing, and here in the Sunny South, it is in full bloom.  Friday nights will need to change.  I am going to need company.  Tonight it was another sushi and me night, but I spent some time on the Boulevard and can feel the blood beginning to flow.  I'm not saying that I'm about to be a hound dog, but I'm not going to grow fur in my cave much longer.  Indeed, I almost found a travel trailer in my own home state that looked appealing, but on further inspection, it was not the thing for me.  But it got me thinking, and I can feel the call of the road and far off places.  I may have to spend more than I want to get one, but a small, easily trailerable unit has its attractions.  Until then, though, as long as I am at home, I am going to find company.  I'd forgotten that I can entertain people at my house, and have gotten far from the practice of meeting others out.  But double vaccinated in a vacation wonderland, I am ready to roam.

Or so I say.  What matters most is if anybody wants you around.  One can never assume, and though I was greeted once again by name when I walked into the sushi restaurant, the girls in cut off shorts and tank tops were not calling to me like the sirens of the sea ready to waylay a homeward sailor.  But as I remember, they never did, and still I had a life.  A life of some kind I intend to have once more.

Oh, what wonders a late afternoon or early evening will cause you to entertain, but then, as the sun sinks and world goes dark, what can you do?  Perhaps rewatch almost the entire season of "Emily in Paris" once again?  I know someone who did just that while breaking a vow not to drink so much whiskey alone in the night.

I must find the nocturnal Quixote in me and ride my own Rosinante toward some distant cafe Dolcinea.

Either that or begin taking sleeping pills early in the night.

I hope it is that version, anyway, and not this.

I think we could all use a little Bosa Nova romance right now if evidence is any indication.

Speaking of evidence. . . what's the deal with Cuomo, anyway?  I can't believe the sonofabitch is still Governor after being convicted of rape. What is New York, some Banana Republic where dictators can do whatever they desire?  It's not like he is just some awkward guido who doesn't know how to act around women he finds attractive or some working class stiff with a snootful who goes home and knocks his wife around a bit.  Oh, I know many of you will descry this as a problem of the fragile intellectual elite who have been raised on a steady diet of identity politics and social theory, but you would be wrong.  You may object and declare many of these as alarmists who have only bumped into the easily palatable, watered down version of theory, that they are Pomo light, akin to the Christianized who have never read the Bible.  But fuck Cuomo.  Burn that rat bastard at the cross.  Rapist don't deserve due process.

Well fuck it, an accusation is as good as a conviction. Ask Kirsten Gillibrand (link).  She helped America once by getting rid of Al Franken, and she can do it again.

There is much to be conflicted about, I guess, and again, maybe its just Covid or maybe its the time of year, but even the N.Y. Times is running stories like this one.