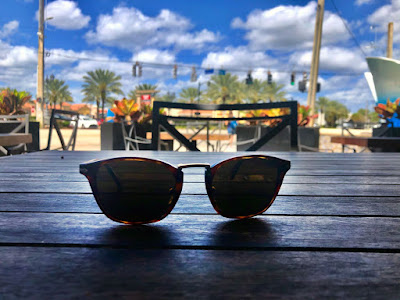 This is a photo of my new girlfriend.  I call it "Ceviche at Noon."  That's what I said, anyway, when I texted Art to see if he wanted to go to lunch yesterday.  We are both vaccinated and ready to eat and drink outside. I told him it would make a good title, and so it does.

I've tired of saying "my travel/art friend," so I now proclaim his new moniker.  Art.

It has been a perfect spring break week here in my own hometown, and now that some of my homeowner problems have been addressed, I felt free to enjoy myself.  I shouldn't.  I know what happens when I do.  Something terrible always goes wrong.  It is my fretting and worry that holds the world together.  My world, I should say, for the rest of you seem to enjoy life trouble-free, or so it would seem.  It must be nice, for instance, to have the Life of Q, with its hundred vacation days in Aspen or other haunts of the rich and famous each year.  New cameras and expensive wines and boogie watches and the natural beauty of California's Wine Country--the boy never tires of reminding me that he has it made.  He rides me like a cheap mule.

After my lunch of ceviche and gazpacho and sangria yesterday outside with good company in glorious weather, I was ready to step out and party.  Instead, however, I fell asleep sitting up in a chair until it was time to go to my mother's.  Well. . . I'm not in shape, I guess, after a year of living safely.  I'll have to work my way back slowly.

I don't have much time for writing this morning.  The Wrecking Crew comes today, and I "overslept" greatly.  I took a single Advil PM last night, and it really knocked me out.  My reaction to drugs is all over the place.  Sometimes two of them won't put me to sleep, and other times, one will act like heroin.  Last night was a bad dreams and heroin night.

Thusly, no jungle or any other narrative today.  Just a couple of observations that may jump the tracks.

To wit: WTF is with this Prince and Princess Markle thing?  Why are the Markle's crying in public?  And why do people care?  I mean, it is not like the Queen of England is a real Queen, right?  It is all make believe stuff.  She has no true power?  Am I right, or do I just not know that she gets the nuke codes every morning?  Do people believe that England has a true monarchy?  One of us is delusional.  As I understand it, Prince Markle has lost his job anyway, so now he is trying to market his image, but it is not really the former prince anyone is talking about.  The story seems lame to me, but what do I know about being a Royal?  It must be on of the hardest thing in the world.

But damn, I DO love watching "The Queen."

There was one other thing, too.  What was it?  Oh, yea, I remember.  The Grammys.  Really?  Is your heart just thumping in anticipation of "The Song of the Year" award?  Let me give you a clue.  It won't be a jazz number.

Whatever.  This is what happens when Trump isn't King and I quit watching the news.

O.K.  I have to jump on getting those sheets washed and the house picked up now.  While the maids break things, I will go to lunch with my cousin and my mother.  It will not be gazpacho and ceviche today.  Probably more like Arby's.  I shouldn't admit it, but I DO have a secret yearning for one of their roast beef sandwiches with horse radish sauce.  But a single bite could cure me of that today.  If I brave the island of fast food, however, you will be the first to know.