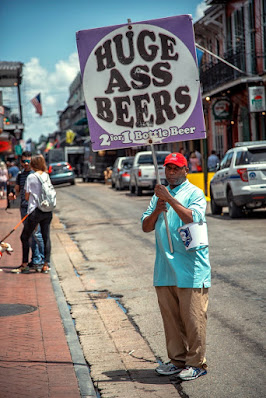 It is summer here now.  We hit the 90s.  The sun is shining and the air is clear and people are out and about with a vengeance.  I had to go out to pick up some things for my cousins at the Oriental store which is close to the Big City, so I took a tour of the Landmark Lake to see if the Farmer's Market is hopping.  Oh, boy. . . it was more than hopping.  I've not seen so many people there before.  I continued on to drive Downtown.  Every bar was cranking.  There were people wherever you looked.  I found a parking space on a side street and decided to get out with a camera.  Scary.  I mean it.  I was really nervous.  I haven't been around people while carrying a camera for a long, long time.  More than a year.  Pre-Covid.  Now the Downtown Crowd is a crazy mix of things.  It isn't the Boulevard crowd of privileged shoppers, and it certainly isn't a college or university crowd.  It is a great mix of the hoi-poloi.  They are LOUD.  They jump and jerk and hop like they are chickens at the county fair dancing on those chicken wire floors charged with electricity.  The air smelled of spilled beer and marijuana.  The music. . . well, I can't tell you about the music because I don't know any of it.  But it was loud.  In olden days (pre-accident), I was fairly confident with my camera in hand, but now. . . well, I didn't even wish to be bumped.  But it was fun being fully vaccinated and walking the streets even though nobody--I mean NOBODY--was wearing a mask.  Apparently Covid has resigned.

I only worried about the variants.  And this crowd looked like a shitload of variants.

The important thing is, I broke my regenerated cherry yesterday and took a few pictures in the crowd.  I might have two good pictures out of the bunch.  Maybe.  I haven't downloaded them yet.  It will take practice to not have the shaky Don Knotts semblance that attracts sharks and to be able to glide through the streets confidently unnoticed, but I have to say for all of it, yesterday was fun.  It was a shock to the system to step back a year into a seemingly normal life.

Of course, everyone had already been vaccinated.  No worries.

Moving the clocks ahead shouldn't effect me.  I mean, I don't have to get up to go to work.  I can let my body's clock do what it wants.  So why oh why did I not sleep last night?  Why did I get up at four, or was it three or five?  I couldn't figure it out.  And why did I get out of bed so late?  Or was it?  It doesn't matter.  The time shift has already f'ed me up.

It is Monday, however, and people have gone back to work.  Virtually, anyway.  The streets will not be as festive today, though the beaches are jam-packed with wicked Downtown fun.  It is hard to settle into a normal life when you know that elsewhere looks like this.  I think they are celebrating the Grammys.