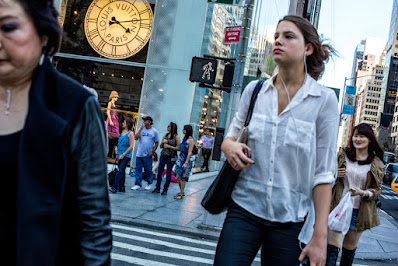 One of the disadvantages of hanging around with my mother and her friends is the constant talk of illnesses and death.  They don't pretend to talk about the future, something they have relatively little interest in.  It is enough to make you drink.

Day before yesterday, my mother's cousin was at her house when I arrived.  It is not really her cousin, or rather is a third cousin.

"Meet your relative," my mother said.  I had never met her before though my mother has known her all her life.  They keep in regular touch with one another.

The woman was a talker.  She went on and on and on about things I had no interest in.  I never tried to interrupt or interject, though.  I could tell there was little point to it.  I just let her talk. . . and talk, and talk.

I left after an hour and a half having done little but grin and nod.

Yesterday morning, my mother emailed me that she got a call early in the morning that her cousin was in the hospital.  I thought she might be there for her sister who was just diagnosed with cancer.  But my mother didn't get to the phone in time as she was asleep in bed, so all she had to go on was a phone message.

When I went to my mother's yesterday afternoon, she told me that her cousin had gone to a Walmart on her way home and that her leg suddenly gave out.  Her tongue and mouth were tingling.  She sat down and took her blood pressure which was more than 200 over something.  She drove to the hospital.  She had had a stroke.

Jesus.  The woman who wouldn't stop talking looked great.  She looked healthy as a horse.

All of this is wearing on me badly.

When I left my mother's house, I picked up a falafel bowl for dinner and headed home to eat with the cat.  I added a little chicken I had grilled to the mix and poured a glass of wine.  The late afternoon (they are lasting until nearly eight o'clock now) was gorgeous.  Now, my routine has become ingrained in me this pandemic year, and each evening after dinner, I do nearly the same thing.  My after dinner drink finished, however, rather than pouring the next, I decided to take a walk to the dock on the lake.  I don't know why I rarely do this, but it has somehow fallen out of memory.

I got there as the western sky was turning rosy against the deep blue above.  Three kids were fishing from the dock, so I sat on a bench not to crowd them.  For a bit, I was covered by Mayflies.  Then a nice breeze set up and they settled back into the grass.  I watched the boys cast their lines over and over without a bight.  I used to come fish from this dock and I know that the weeds make it nearly impossible to catch anything.  With each cast, they stripped the hydrilla and pondweed from their hooks.

"You guys catching anything but weeds?"

"Not tonight.  Sometimes, though.  It is better from a boat."

"They were schooling right out there the other night churning up the water, but you need a boat."

I nodded.  Good kids.  They handled their rods very well.  After a bit, two of the boys packed up their stuff and said goodbye.  The third boy continued to fish.  He had a metal lure that whirred and churned up the surface water as he reeled it quickly in.

"That's an interesting lure.  You can see the fish hit it on the surface."

I was hoping to see him get a hit, but the sun was setting and I decided to head back home.

It was just a simple walk to the lake, but it was somehow transforming.  It wasn't just the lake, though being out there was good and had me thinking about getting back into the natural world again.  It was simply a matter of breaking routine.  I was aware, once again, of the world around me that had disappeared from vision in the year of isolation.

A man and a woman were walking toward me on an evening stroll.  He had an aristocratic manner and a very pretty wife.  The wife gave me a sweet smile and held my gaze until they had passed.  I realized then that I was probably wrong, that she was his daughter not his wife.  But that is me.  That is the way I think.

At home, I put on some water to make a cup of tea.  I hadn't made tea for some time.  Yes, I needed to drink more tea in the evenings, I thought.  I need to change my habits a bit.  I need to pay more attention.

Last night, I woke up in bed laughing.  Half awake, I couldn't stop even though the dream and the cause of my laughter were very, very vague.  I have only woken up laughing a very few times in my life, but last night's was a belly buster.

I got out of bed long after sunrise.  Whatever was going on last night kept me in long slumber.

Today I will do something different.  Oh, but wait. . . the a.c. guy comes for the semi-annual service mid-afternoon.  Whatever I do, it won't last long.  Still, it is an attitudinal as well as a geographical adjustment.  Maybe I'll just go buy one of those carved mineral trays that unblocks your chakras.

Or maybe I'll go out and buy a new fishing pole.