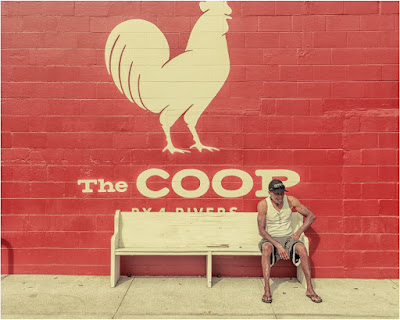 It is Easter, I know, but I decided not to post an Easter card.  Rather, I decided to post the rooster responsible for the hens who laid all those bunny eggs.  I'm not an idiot.  I know bunnies don't lay eggs.  They get the chickens to do it.  But you know. . . who's cock of the walk?  Yup, you guessed it.  It's your old buddy, C.S.

Why?  'Cause I took this picture on my walk the other day.  It is the first time I've assaulted a person in a very long time.  It's O.K.  I'll get better at it.  I just didn't have the chutzpah to ask him to put on the mask.

I have never liked Easter Sunday.  I've told you this before--every year for over a decade now.  It was a torture to me as a kid, all pastels and getting dressed for church and hard boiled eggs and cheap candy.  In the past half decade, it got me into trouble, too, as I was never able to provide the goods required for a certain someone.

I was an Easter failure.

And continue to be.  I am having my mother and cousin over for Easter lunch, but I have made no cards nor bought any little treats for them.  There is nothing to suggest the commercialism of the day.  I am going to make them kabobs.  You know, the traditional Easter brunch.

I was up later than usual last night.  I watched the Gonzaga/UCLA game, and oh, what a game it was.  Best ever game of all time.  I watched it with my college roommate remotely, texting comments on the action back and forth.  He and I won many b-ball tournaments over the years, two unlikely hippies, one of us with talent and the other. . . well, let's just say I was a "utility" man playing garbage ball, disrupting the other team, hustling, etc.  But we won two tournaments while in college and lost two others, one to the college AAU team made of grad students who played college basketball as undergrads (and we only lost by 4), and the other to a team staring a couple NFL players trying to finish up degrees during the summer (including Nat Moore who was originally signed at the university on a b-ball scholarship).  Over the years we won more trophies in other leagues and played with and against NBA and European League players, so we feel well qualified to comment on the talents and foils of these kids.

They were great.  They were flawless.  By the fourth quarter I was sad that either team would have to lose.  It was a game of beauty and wonder and awe.

But it has left me tired.  I didn't go to bed straight away.  I knew I was too jacked up to sleep, so I went to the computer and cooked up some images.  I didn't get to bed until way past midnight.  Laugh if you will, but I didn't stay up late in my youth, either.  Nothing good ever happens after midnight they say.  Well. . . some of them say.  But that's good enough for me.  The others all have STDs.

The day started out with a breakfast off the Boulevard.  I was in a quandary about going for the longest time.  I was trying to get Sinatra's "The Best of Things" album from a secret source and chatting with Q about the meaning of life or something about which we disagreed.  By late morning, however, hunger drove me, and I'm glad it did.  It was marvelous.  I went to a little French bakery and got "The American," two eggs, bacon, and potatoes.  I asked for three eggs, but apparently they didn't understand my request.  The eggs there are small enough to be quail eggs.  I sat out on the sidewalk and wolfed down my petite dejeuner and drank cups of coffee before deciding to get more--a chocolate bread pudding croissant.  Life had gotten sweeter for awhile.

The Boulevard was jammed with the cruise ship crowd walking about like they'd just been dropped off in some exotic foreign port for a few hours.  Jesus, they are loathsome, but they make me want to take pictures.  And I will.  I just can't do it in my own hometown.

I came home after that and somehow ended up cooking pictures all afternoon until it was time to go to my mother's.  I hadn't gone grocery shopping for the Easter victuals.  Hell, I hadn't even showered.  No matter.  I looked fabulous with my newly blonded hair.  I fixed some computer issues at my mother's and tried to find "The Dancing Outlaw" on Amazon, Netflix, or anywhere for them to watch.  No luck.  I tried to find "Gummo" for them since we are from a town not far Xenia in which the movie is set.  No luck there, either.  I had to settle for "The Wild and Wonderful Whites of West Virginia."  I told them my friends always ask if that is real or if it is made up.  My mother and cousin will be bored with it, I'm sure, because it is like watching home movies of our family.  That is exactly my heritage and my stock.  An old frenemy used to tell girls I took ten showers a day trying to wash the hillbilly off me.  He was a prep school boy who wanted to show off a bit.  I taught him not to talk that way any more.  He begged me to believe that he wouldn't.  I didn't feel bad about that one.  You just don't fuck with the Wild and Wonderful Whites.

After mother's, I was off to get the fixin's for the next day.  I ended up buying myself a nice piece of steak for dinner, too, which I threw on the grill as soon as I got home.  Oh. . . I also stopped at the liquor store.  This was no time to diet.  It was Saturday and it would soon be Easter.  No. . . let the food and drink penury restart on Monday.  I poured a glass of wine and fed the feral cat who has decided she trusts me much more now and has fun dashing between my feet.  She likes to talk more now, too, and enjoys staring into my very blue eyes.

I'm hoping something has changed in me now, and that I will overcome my pandemic life a bit.  I have some appointments in the coming week that will keep me home, but the CDC says the walking vaccinated can travel now, and so I will.  Surely I will.  I've always travelled.  And I have things I need to walk away from.  No, let's not think that way.  There are things I must travel toward.  Yesterday, perhaps, I turned a corner.

But who will feed the kitty if I am gone?

This just popped up on my computer screen.  Are you kidding?  WTF? 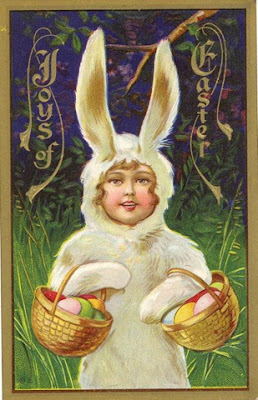