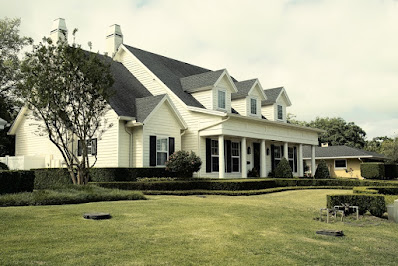 I saw this house on my walk to the auto shop the other day and was simply fascinated.  A suburban palace, I proclaimed.  Imagine the lives of the people within.  They are well-off but not wealthy.  Their tastes run to the "Leave It to Beaver" style of architecture.  The kids have straight teeth and go to private school.  They do well and take tennis lessons in the afternoon.  There are bookshelves with some books, some knick knacks, and a lot of framed pictures.  There is a living room, a family room, a dining room, lots of bathrooms, a master suite with a huge walk-in closet, a study, a guest bedroom, and 2.5 rooms for the children.  The kitchen is fit for a three star Michelin chef with all the greatest appliances.  There are a Range Rover and a Mercedes in the garage.  You choose the career paths of the mother and father.  Their ethnicity, too.  And, of course, their sexual preferences.  I can only be certain about the physical objects.  This isn't the 1950's, you know.

But I am fascinated by the house, the yard, the vibe.  I don't think I could afford the utilities and the exterior upkeep on the place which depresses me.  I've always lived in small rather than grand quarters.  I would like to be freed from monetary constraints.  I would like to have inherited money like Peter Beard and the Paris Review crowd.  Private schools.  Ivy League.  A life of creative leisure.

This is not the home of creative leisure, though.  These are not people tortured by such thing.  They may have a modicum of "art" on their walls, but nothing of significance.  These are not people to whom I could send my morning messages.  They are not Puritans, exactly, but you don't get to live this way by running amok.  There is wine and cheese and the occasional after dinner drink, and there is "the club" and their friends. . . vacations to Jeckyl Island and Hilton Head, ski trips in the winter and rooms at the Ahwanhee in summer.

Theirs are lives to be complimented.

I want to date their daughter.

I am the product of my hillbilly upbringing.  Sorry that.  My folks always had to settle for "good enough." I haven't the luxury of disdaining such living.  My disdain would simply be ascribed to envy.

Everybody deals with shit.  Some of it is just prettier than others.

But enough of that nonsense.  The picture's the thing.  I made it, and it enchants me.  I've been working on post-processing images again trying to find a look.  The hours go by with me lost in experiments and invention.  Of course, much of it doesn't work, and some does, sort of, but not in a spectacular way.  Occasionally, though, something will pop for me, and then I'm happy.  This photo is one.  I love the creaminess of the image, almost buttery.  Yes, that is it.  It is visual butter.  So much goes into such a subtle thing.  Most people would never notice or really care.  Why go to so much trouble.  There are apps that will do that.  My iPhone's various processors can transform work very quickly.

Oh--Easter.  I charred some kabobs for my mother and cousin.  I did a bad job cooking the kale, too.  But the day was lovely and we ate on the deck.  My cousin smoked her medical marijuana and my mother drank wine.  I stuck with the Micheladas while I cooked.  The music was playing and we were chatting, an Easter gathering that could not occur last year.  I felt myself opening up a bit.

They left before sunset, and I began the big cleanup.  When that was done, I fed the kitty, poured a scotch, lit a cheroot, and sat on the deck thinking about tomorrow.  I should go somewhere soon, I thought.  I decided to see if I could really sleep in the car.  I put down the seat and opened the hatch and climbed in.  Yup.  I fit.  I lay there for awhile meditating on how it would be.  Walkers passed and stared, then gave unsure smiles and waved uncertainly.  Ha!  There's the neighborhood nut again.  I got out and put up the seat and realized that my Xterra was made for hauling and camping.  The entire back seat came out with the lifting of two handles.  The back became enormous.

Another scotch and more considering.  It was difficult getting in and out of the back, a combination of age and brokenness.  It would be good for me, though, I thought.  I could regain my youth.

The sun was low and the air beginning to chill.  The cat lay in a ball keeping a careful eye on me.  Can you imagine, I wondered to her?  Me setting off on a car camping trip?