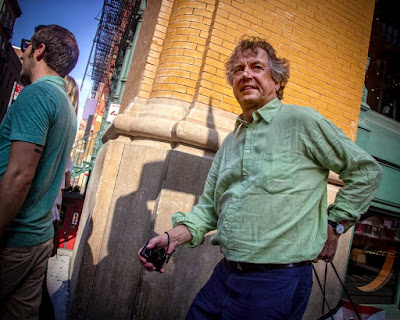 I found thousands of photographs in some old files that I haven't seen in at least ten years.  Literally, not figuratively (though in the common parlance they now mean the same thing).  I have been overwhelmed spending hours upon hours just scrolling through them.  I haven't gotten to the bottom of them yet.  And this was a single folder containing many many folders, on a hard drive.  How did I ever get to be so sloppy?  I never managed or organized anything.  I just dropped folders the way mushrooms drop spores.

Speaking of which, there is a big article in the Times today about the amount of psilocybin mushrooms being grown in the U.S. and Canada in big, climate controlled warehouses.  Mushrooms are a big market now, and most of the warehouses are growing edible mushrooms that are good for the body.  But there is a growing corpus of work that shows a little tripping is good for the mind.  At least, they say, it helps people with depression and substance abuse.  If you missed out on the medical and recreational marijuana market, you might want to get in early on this one.

A pal of mine ate some mushrooms a couple weeks ago.  It doesn't seem to have improved his mood, however.

I've noticed that many stories on CNN are about people who "speak out" or "open up" or "come forth", often preceded by words like "finally" or "at last."   They also use the word "confess" a lot.  I'd say this is not so subtle editorializing.  They often emotionalize stories, too, and are not above sensationalizing.  The N.Y. Times is following suit.  What happened to "objective" journalism?  Nobody wants to be a reporter, I guess, if they can be a feature writer.  Of course, they would all like to have the creds to be a straight up op ed writer.  There is nothing like getting paid to opine.

Sour grapes?  Ha!  I don't get paid for this.  I can opine all I want.  It will simply cost me the esteem I so desire.

But esteem is hard to come by these days.  For me, I mean, old and locked away in the castle.  I keep waiting for the knock on the door.  I think I'll be waiting a long time.  And if it does come, sure as shitting when I open, it will be a crone with a poison apple.  My friends encourage me to get out and live the vida loca, but I have become paranoid and morose.  In the past, I went out so people could look at me, so I could capture the attention of someone who had captured mine.  Now, nobody looks, or if they do, it is with suspicion and irritation.  It is no longer fun.  I understand Garbo.  I understand Ava Gardner.  No use giving interviews after you've lost the championship fight.

Jesus, this has taken a wrong turn.  I should eat some mushrooms.  LSD saved Cary Grant, and he was Cary Grant, or said he would like to be.  But I grew up in the drug generation, and what it did to some of my friends doesn't seem very attractive.  It seems to have accelerated certain types of degeneration.

No.  Long walks will do me as long as my hips hold up.  My mother's are giving out and she bemoans the fact that she can not make the long walks she is used to making.  She is valiant.  She tries.  But it costs her later.  I think I might suggest psylocibin.  I'll give her the articles to read.  I'll tell her that it is what makes Trump so great.  She'll like that.

O.K.  I screwed up today.  CC and Q were both texting me while I was writing this and I kept interrupting this writing to reply.  I never established a rhythm or a flow.  Now, I am way past done.

But I think the photo is apropos.