The Future Ain't What It Used To Be 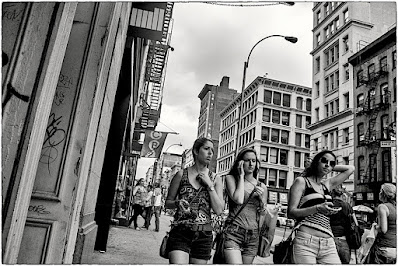 I am very unproductive.  Hours simply drift by.  My life has a routine, and it has become a monumental task to break it--assuming I want to.  I do.  I do.  I swear I do.  But, you know, you become so comfortable doing next to nothing.  I can do anything I want, so is what I do what I want to do?  That is the question facing me now.  Why would I continue the same patterns I've had for more than a year if I didn't actually want to?  My life is serene.  There are books and music and films and documentaries.  There is art.  My life is quiet, but not without stimulation.  There is just very minimal human interaction.  I've always been somewhat irritated by other people, but I find that has become exacerbated.  I should be going to lunches with friends at least, and I have made some standing but unsecured plans.  I have been reluctant to secure them.  My life has become virtually commitment-free.  My only commitments have been to the moon and the sun and the rain.

That last line just came out.  Fun, but it means nothing.

What I believe happened was that I was traumatized by living all those weeks with Mr. Fixit.  Months.  He showed up early, and the day was one of toil and expense.  I held up, but somewhere deep in my unconscious, I think I was traumatized.  Then the plumbing.  Still, everything I initially hired Mr. Fixit for needs to be done.  The deck is falling through.  The house still needs some painting.  The bedroom still needs new carpet.

I have become lazy and do not want to work on anything, however.  Remember the awful death smell?  It remained much longer than I let on.  I thought something had died under the house.  Then I saw the pregnant possum.  I needed to close up the open vents that went under the house.  Well. . . that finally happened yesterday.  I felt like a hero.  I went to the hardware store and bought some wire, came home, measured, cut it, and put it up.  All in all, it took less than half an hour.  I felt as if I had worked all day.

Oh. . . that was after my ceviche, gazpacho, and sangria lunch.  Outdoors.  Alone. 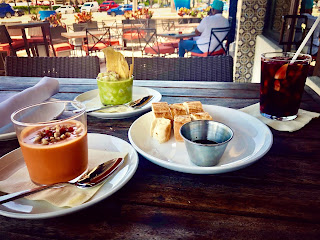 I only invited people to come once I was eating.  Just to torment them.  It was too much commitment to invite them before.  There is something wrong with me, I think.  I am living like an outdoor shut-in.

I thought I might wake up and drive to the coast today, but that would have meant changing what I normally do mornings.  It is a beautiful day, but who needs the beach, right?  It is such a hassle.  I've seen it so many times before.

I often wonder if I can still carry on a conversation.  Yesterday, however, a foreman from the factory called me to ask me questions about what he should do when getting into the mandatory retirement program.  "Ha!" I said, "it is not often people want MY advice about financial things."

For the next ten minutes, I was my normal, cleverly charming self.  I can still talk.  I just don't know how many continuous minutes I have in me.  Face to face.  Trapped.  The performance.  The requisite time.

I've spent the past few days going through the photo vaults that are an unmitigated mess.  It will take months to organize them.  But there are many, many secrets there, things I had forgotten, things that might never see the light of day.  I want to tell and show them all, but the revelation might be too much.  I am both proud and terrified at once.  There is proof of a grand life there, but there is also enough to make people resent me for it.  All that bragging and caterwauling could just be true.

And so, at least for now, the vaults remain hermetically sealed to prying eyes.  Perhaps I need not prove I once was quite capable of leaving the house.

I will, though.  I will.  I can't promise, but it seems I must eventually. The time will come organically and not be forced.  Miami was forced and a terrible disaster.  I must be impelled rather than compelled.   Something irresistible will catch my imagination and I will go.  Until that time. . . I will meditate and prepare.

But I warn you, it will not be the same place it was before.  The past was bad, they say.  It was terrible.  You won't recognize the future.

And who knows?  Maybe we'll finally get those flying cars.