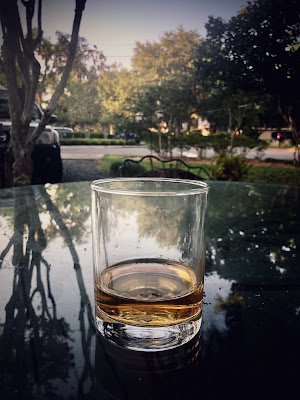 The day was shit.  It feels like today will be a repeat.  My horoscope hasn't even come close to reality.  But the hyacinths bloom.  It is the cruelest month.

I decided to follow the constructs of yesterday's post.  I went to breakfast off the Boulevard at a small French bakery and ordered a croissant eggs Benedict.  I got coffee, too, but theirs was no better than the poison I had at home.  I got an outdoor table between two miserable women, one extremely fat and the other one older and unable to walk well, and a married couple who spoke in small town aristocratic tones about the church and some of the goings on in the community.  The two women were wondering how to travel the two blocks to the end of the street where it dead-ended at the lake.  They wished to join the famous boat tour there.  The fat one wanted to call a cab.  The older one just seemed a bit addled.  Somehow, I managed to get caught up in a conversation that went across my table between them and and the married couple who became interested in me.  They said they were longtime residents of the town to which I responded, "That doesn't mean much anymore."

"Oh, have you lived here long?"

They began asking me if I remembered some of the old businesses on and around the Boulevard.  Of course I did.

"How old would one have to be?" I queried.

They gave a number of which I was far south (or is it north?).  They looked surprised.

"Really?  Are you retired?"

Then the husband spoke in a lower tone, leaned in, and got a little snarky.

"Were you a surfer?"

I didn't get mad.  I am used to "these people."  I was amused and took their slurs as compliments.  After all, there I sat in a pair of long, hipster-looking shorts, a t-shirt, and flip-flops with mussed bleach blonde hair eating breakfast just off the Boulevard at the approach of noon.  And so I suffered their queries and listened to their tales of the workings of the small town inner circle, of who they knew and who owned what, with dismal aplomb, a social media smile plastered upon my implacable mug.

But I didn't enjoy my meal.

Back home, too full and still exhausted, I stripped off my clothes and crawled back into bed.  It did little good, however.  I was too full and my slumber was no better than it had been the night before, troubled and haunted and fitful.  When I got out of bed, I felt no more rested and, perhaps, a little worse than I did before.  But the afternoon had slipped away and the thing I needed to do was to try repairing the big printer in the garage.  The printer head has a clog that I haven't been able to clear and it was scaring me.  It is not just that big printers are expensive but I have thousands of dollars invested in inks as well, and they will only work with this model.  So I grabbed me laptop and went out to give it a go.

Much later, the head was still clogged.

It was time to go to my mother's.

When I got there, she was gone.  I guess I should have called even though this was my "regular" hour.  But with vaccines in our system, we are not in lockdown isolation any more.

Frustrated but relieved, too, I returned home.  I poured a drink.  This had been a lousy and wasteful day, and I was thoroughly convinced that alcohol had prevented more suicides of creative and intelligent people than anything else in life.  For the bovine, I feel it is just a way to get fucked up, but for the thinking and creating class, it is surely an effective if dangerous medicine.

Yea, yea. . . I'm just another small town prick, no less horrible than my two breakfast friends, but don't judge me just because you have sense enough not to say it.  I mean, even at breakfast, when I told the couple what I had done and where I had gone to school, the husband wanted to tell me about minoring in English in college.  What the fuck is that?  Minoring, I mean.  I wouldn't tell Einstein that I had read some books on physics.

Last night I took a nerve pill so I could sleep through the night, but I still don't feel rested.  Something is weighing on me that won't leave me alone, and I can't shake it.  But I didn't get to walk yesterday, and as I mentioned, walking is a wonderful therapy.  A walking man walks, right?  And a talking man talks.

I've done enough of he latter.  I need to get out now and do the former.