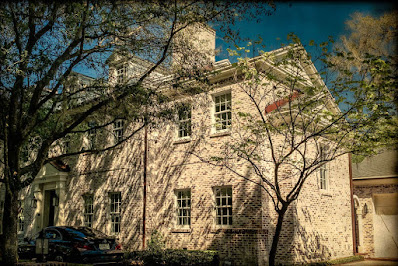 I've been printing out some of my Covid era photos in large sizes.  Houses, buildings, objects.  They look nice.  There is something about seeing them big.  They are all light and shape and shadow and color.  They don't mean anything, but they do.  They are evidence of something.  You can argue either way on the moral complexities of them.  They represent in concrete form the cultural equities of our history.  In the photos, those mute structures strain to speak.  They comprise the extant galleries and museums of cultural tastes, norms, and necessities.  At first, when I began taking them a year ago, the photos were mere exercises.  Their blankness left me cold.  Recently, though, I have begun to warm to them.  I have enough of them that I feel good about to fill a gallery, I think.  I may frame a couple and hang them on a wall just to see if I feel that way in the long run.

Of course, if I had been serious, I would have shot large format cameras with tilt/shift lenses to reduce the optical distortions.  Selavy.

I can't read the news any more, not thoroughly.  I mostly look at headlines now.  But one story caught my interest today.  The government is recognizing the existence of UFOs, though they have come up with a new moniker for them as if they are something new and not the old, crazy aunt version of the thing.  UAPs, they call them.  UFO abductions are a thing of the past.  All that putting you into a frozen state and placing probes in you--no longer relevant.  Talk to us when you've been abducted by a UAP.  THEN we'll start to listen.

Do you think the Air Force will let us see what is in Hanger 13?

One other story interested me, too.  Bitcoin and digital currency people are making HUGE money.  It bugs me because I can't even say what those are.  How did this get to be a thing?  Not that any money is real, but internet money somehow seems ten degrees removed.  As readers of the blog know, I have made all the wrong market moves, so I am giving you fair warning.  You might want to get out 'cause I'm thinking of getting back in.  I've been a pretty good indicator so far, my smart money friends say.  Buy high, sell low seems to be my motto.

But buddy, I'd like some money, too.  It just doesn't seem right to me that all those twenty-something internet geeks are hogging up the profits.  I'd like to be able to afford a week at the beach.

Everything else is too dangerous to talk about.  Our world becomes dumb but loud.

I am beginning to really prefer the whisper of houses.