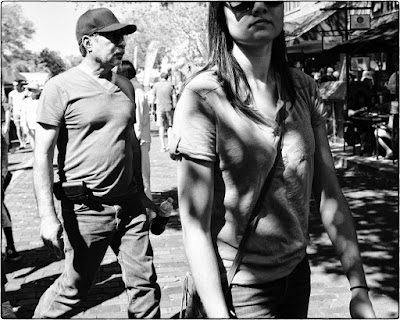 When I got the first job that summer out of high school, I was disliked (or worse) by my "colleagues."  I was the only "long haired hippie" working on that hotel site.  My two friends cut their hair when they got the job, so they had no trouble. But for me, every day brought some sort of harassment.  I was a union member, though, and that was something.  People loved the union.

I was lucky.  The weather was hot and unbelievably humid, and it rained hard every afternoon, but I worked on the mezzanine which was open and airy and often had a nice breeze.  My two buddies had jobs on other floors which were more like construction sites and less like a viewing station.  I got to see a lot of what went on with the "overlords" of the project.  And I got to breathe.

When I started there at the beginning of summer, the hotel project manager was a fat German engineer with a very strong accent.  He was brought in because the project was behind projections.  Wherever he went, he trailed a pack of men holding long rolls of engineering plans that they would occasionally roll out onto wooden tables.  They would point to something on the paper then out to some corner of the hotel structure, then everyone would bend their heads down closer to the charts and point and nod.  Authority and power, I thought as I pushed my long handled broom across the bare concrete floor unnoticed.

We started work just after dawn and worked ten hour days.  We had two breaks, one at ten and one for lunch.  I packed three sandwiches and some fruit every day.  I ate one at "recess" and the other two at lunch.  After that, I'd lay back on something and doze.  Nobody ever ate with me which was fine.  I could hear them talk about the cars and boats they were buying with all their overtime money.  There wasn't anything in those conversations I felt I was missing.  I wasn't much interested in arguments about tuck and roll leather upholstery.

One day, a new fellow showed up.  He was young, in his thirties, maybe, was tall with broad shoulders and an athletic build, and he had long hair that hung from beneath his construction helmet.  We all had to wear them, of course, white plastic things that made your head sweat in the humid southern heat.  His, however, was an earthy brown, and he had snapped the headband of the thing in so that his helmet was facing backwards.  When he walked onto the mezzanine, he, too was followed by a gaggle of men with construction plans.  I was stunned.  Was this guy in charge?

All the hand painted "On Friday We Kill the Hippie" graffiti began to disappear.  I didn't gain any friends, but things seemed less caustic than they did before.  The rednecks left me alone. A hippie engineer, a project manager, an authority.  I had never imagined such a thing, but now I was thinking.

After my accident, after everyone let go the giant I-beam we were supposed to move, and after my fingers were crushed, I got a call at home from the front office.  I was to stay home until I was released by the doctor to come back to work.  No worries, they said.  I would still be paid.  I was a dumb hillbilly and had no idea of the sort of money I was entitled to.  I had no knowledge of lawyers and such.  The doctor, however, was a nice guy and with a wink gave me plenty of time off before he released me.  When he did, he put me on limited duty.  I could go to work, I just couldn't do construction.

So they put me in the trailer with some of the construction managers.  I wasn't really sure what these guys did, but they were on telephones a lot and were constantly shuffling papers.  Construction foremen would come in and out all day.  My job was to sit there until somebody needed something.  One day, they gave me the keys to a van and said I should drive a group workers to the medical clinic for checkups.  And this became my job for awhile.  It was a good job, I thought.  Really good.

There was one foreman who didn't like me at all, and he didn't like seeing me sitting around in the air conditioned trailer all day.  He was an ex-marine volunteer police officer with a military haircut and a military build.  He gave me shit every time I saw him.  One day, I was feeling clever and a little cocky, so when he made his usual derogatory remark, I said, "You know, you remind me of a catfish."

He furrowed his brow and turned to me.  I could see the two little white balls of spit at each corner of his hideous mouth and the anger in his tiny, dull eyes.

"How's that?" he challenged.

"You know, you're all mouth and no brains."

The next day, they gave me a red flag and a vest and had me stand in the hot, muddy drive and direct traffic.  I wasn't going to be sitting in the air conditioned office drinking coffee any more.

The next time I got a call to drive, there was only one fellow and I was to drop him off at the clinic, so I drove back with an empty van.  On the way, I passed the new campus of the local junior college that would begin their first classes in just a few weeks.  On a whim, I pulled the van into the parking lot and went into the front office.  There, a pretty girl my own age greeted me.

In doubt, I said, "I'd like to apply for college."  I didn't think that I would get in.  They would want my high school transcripts, and when they saw that I graduated in the bottom third of my class, that would be that.  I've explained the troubles in my life during that time, and though I was bright. . . well. . . I missed one hundred and eighty days of school, the equivalent of an entire year.  In my defense. . . when we took the state college exam, I scored in the upper ten percent.  But my grades. . . well, that was another matter.

The pretty girl asked me to fill out some forms.  I took the stack of papers to a table.  I felt out of place there in my workbooks and construction clothes, but I went through with the thing.  When I had finished, I took the pack of papers back to the pretty girl.  She took them from me and maybe looked through them or gave them to someone at a desk.  I was embarrassed and my head was spinning, so I don't really remember well, but in a few moments, she handed me another package of papers.  When I opened them, there was a letter of congratulation and a time for me to go to orientation.  It took a minute to sink in.  Stunned, I left the office and made my way back to the construction van.

I was in college!

It felt like a million pounds had been lifted from me on the drive back to work.  It was replaced by helium balloons.  I practically floated.  They had nothing on me any more.  I was done.  In two weeks, I would be sitting in college classrooms.  It had happened in a single transformational moment.  I was dizzy with it.

When I went into the trailer, I gave them my notice.  "I'm going to college," I said.  I wanted to add, "I'm leaving you fucking morons behind," but I didn't.  There was no need.  It needn't be said.  It was just true.

I hadn't really thought about it, but surely I must have.  After the long haired engineer showed up, something must have occurred to me in that half slumber in the quiet minutes after lunch.  Some incubus of a vision or a strategy must surely have been forming against the din of redneck conversations.  I must then have been making plans for some escape, inchoate but real.

I still carry a reminder of that summer, the deformed digit of my ring finger on my right hand.  If not for that, I think. . . .