Money Will Never Make You Happy (Lots of Money Will) 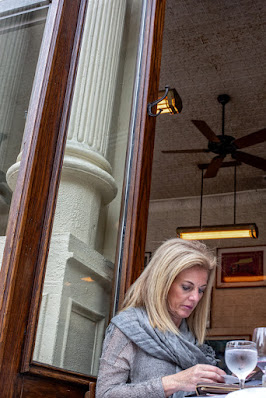 I argued with my mother the other day.  It was a funny, not a mean, argument.  We were talking about happiness, and she said that poor people could be as happy as rich people.  I said no, poor people cannot be happy.  We have lots of poor people in our family, and I asked her to name one who was happy.

My conservative rich buddy said it best, I think.  Money won't make you happy.  Lots of money will.

I didn't grow up believing that.  I hung with a commie crowd.  From each according to his ability, to each according to his need.  We thought we were egalitarians, but it seems we were sexist, I guess.  We were trying for fairness, we thought.  But there was always a little Animal Farm in everything.  Everyone had a copy of Mao's Little Red Book.  I imagine nobody really read it.  We believed in the working class.  That, of course, was where most of us came from.  And what did we want for the working class?  More power.  More money.  You know, all the things rich people had.  "Eat the Rich," read our bumper stickers.

I had some problems.  I never really liked Soviet art.  I didn't really like political art at all.  Socially Aware Art wasn't art, I thought.  It was propaganda.  Woody Guthrie?  Eh.  Good story, but I wouldn't sit around the house listening to an album by him.  Still, I played in a socially conscious band that sang against Regan, war, bombs, the rich. . . whatever there was.

I barely made any money.  I mean, I was a marginal economic being.  But wait.  I was happy.  I was as happy as I have ever been in my life.

Which may not be saying much.

But I was living a richer life than I could afford.  I lived in an apartment just off the Boulevard.  I drank in the swanky bars because the waitresses and bartenders would give me comps.  Yet I was still buying used tires for the car and refurbished batteries from a place on the poor side of town.

One door of my car wouldn't open.

Now I've argued myself into a quandary.  Was I happy?  I worried a lot.  But I had no children.  Maybe if I had children, I would have been more miserable.

But what is all this about?  Why have I brought it up?

Tuesday, I took my car into the shop to get the a.c. fixed.  Thursday I was told they would fix it Friday.  Friday I was told yes, but it would be late.  Late, I was told they had put on the new part, but that didn't fix it.  Maybe I'll get the car back on Monday.

Suddenly, I'm back to my poor days.  I'm driving a seventeen year old car and can't afford a new one.  I am worried about the cost of the repair.  And just when I have gone on a fixed income, a ward of the state, inflation raises its ugly head.  I would be happier, I know, with gobs and gobs of money.

I skipped Sushi Friday in an effort to spend less of it.

Jesus Christ!  I just Googled who is more likely to commit suicide, the rich or the poor.  The article I just read scares the shit out of me.  I am at the very top of the list of people most likely to.  I'm a superlative (link).  An older, single, unemployed white male with no children or religion.  Apparently, I've done everything wrong that I possibly could have.

I guess I shouldn't be the one opining on happiness.

But troubles mount.  I thought I had solved the possum problem.  The screen has been intact for days.  Yesterday, however, I noticed that something had pushed through.  This morning, I can smell that musky smell.  Another minor problem, a mere annoyance?  Oy.  Sure, mixed into a pile of woe.

This post has gone awry.  I picked the picture above intending to write about the good life.  Now. . . I don't know.  Does she look happy?

But he was rich.