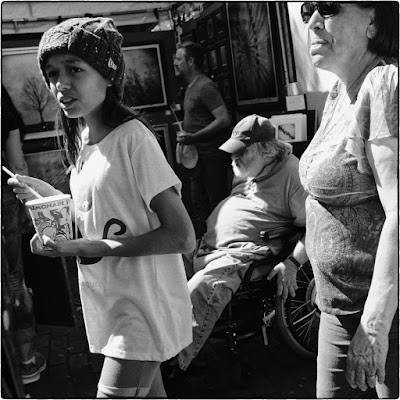 I'm working on revising "Oedipus Rex."  I'm calling it "Motherfucker."  An all Black cast, set at the end of last century in Brooklyn.  I haven't gotten around to changing the character names yet.  Oedipus is an up and coming rapper who signs with a record label, then falls in with the east coast gangstas.  To get out of his contract with the record company, he has to kill his producer who he does not know is his father who left before Oeidpus was born.  As he rises in fame, Oedipus challenges The Sphinx, an old school icon, to some playground style riming, and defeats him.  A new style is born and the neighborhood is happy.  For awhile.  Making his first video, Oedipus falls for one of the dancers and they get married.  That's when things start to go to shit.  Tireseas, the blind voodoo tranny, gives Oedipus the 411--he killed his father and married his mother.  Whereupon his mother ODs.  Oedipus, full of rage and grief, pokes heroin needles into his eyes.  Now a blinded outcast, he ends his days as a busker in New Orleans playing traditional blues.  Though alone, he now understands how hubris and fate have conspired in bringing him to this place.

I'll need help, of course.  I'm way too White to write this.  Maybe I can sell the idea to P. Diddy or someone.  I don't want to go to all the trouble of writing it, though it really seems to write itself.  I definitely can't score it.  But hell, it seems like it could be a smash Broadway hit.  The times are calling out for it.

Yes, it is true.  I am alone too much.  I haven't the right sort of parameters any more.  No guides, no reasonable standards.  Every idea I come upon seems genius to me as long as it is mine.

I went back to Meditation #2 in the series last night.  Maybe some sunlight entered me.  A little, maybe.  I think I can try #3 again tonight.  Gratitude.  I'm certain to do better.

The unofficial start of summer is here in my own hometown.  The humidity has risen, clouds blanket the once blue skies.  It is sultry.  Sitting outside for a meal will soon be out of the question.  We'll only desire conditioned air.  I'll buy a tanning lamp and stay inside.  I'll have all my groceries delivered.  As long as the cable holds out.

What better way to celebrate fallen soldiers?  What?