My Love's Bigger Than A Cadillac 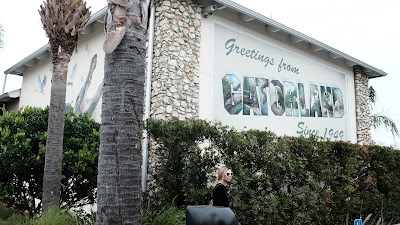 Two interesting things (to me, at least) happened yesterday after my post.  First, Q asked me if such and such was the concert I attended.  May 21, 1977.  Yes, I said, that must be the one.  Oh, he said, that was a good one.  Then he sent me the recording of the concert.  Wow.  It was a good one.  Q says that the concerts done that year are widely regarded to be the best the Dead ever played.  I sent one of the songs to my old college roommate and said I had been at this concert almost 45 years ago to the day.  So had he, he said.  Wait. . . what?  This was something that neither of us had ever known.  I had moved back home after college and had gotten a job, and he was still living in that college town.  Without cell phones, texts, or emails, the only way we communicated was by letter or long distance calls.  So of course, we hadn't coordinated about the concert and apparently neither of us had ever mentioned going.  Listening to the recording of the concert, which sounds like a studio performance it is so good, and thinking about each of us being in that crowd was somehow. . . I don't know. . . weird.

I drove up to the old factory town later yesterday to have lunch with a former colleague.  I got there first, and as I was choosing an outdoor table, I heard my name being called in the distance.  I turned and saw a group of old colleagues at a table next door.  The pandemic is over, I guess, for I got hugs all around.  I realized that this was the first hug other than from my mother in over a year.  I am going back to the same restaurant to have lunch with my former secretary today.  Last night, I got a text that the old factory birthday group is meeting there on Thursday afternoon.  Jesus.  Suddenly I am inundated and overwhelmed.  So much so soon, and all in the same cafe.

The weirdness is upon me.

I finished watching the doc series on the Dead last night.  I was right in my assessment.  Drugs and greed got the best of them, and Garcia's selfish side is brought to light.  The cult had grown larger than even he could believe.  Things had gotten out of hand.  Like the Good Doctor Thompson said, though, you can't out weird America's capitalism.  It will suck you up and make every dollar it can.  That is the Dream as Nightmare.

Like everything that starts as or seems to be a good idea. . . .   Even Eden had the seeds of its own demise. It is the most ancient story.  Our susceptibility to corruption is innate.

I don't know if I can stand to go to the factory people's party tomorrow.  It, too, is cultish somehow, at least it seems so from the outside looking in, and I am not an active participant any more.  I don't have the social media smile I would need tomorrow to make it work.  I have a great knack of eventually saying the wrong thing, and without standing, it might be devastating.  I don't have to censor myself for professional reasons any longer.  It is perhaps better if I just stay home.

That is what I tell myself, anyway.  We shall see.

The last beautiful days of spring are ending here, the perfect temperatures and the subtle, comfortable breezes.  Every day the skies have a tad more cloudiness, and next week is predicted to get hot.  Even Trump has left the sunny south to enjoy the northern clime.  Even?  Hell, you have to be rich like Trump to use Florida as a winter home.  Oh that I had been born to the two manors.  But there will likely be some travel in my future.  After quarantining with my mother for over a year, though, I don't think I can leave her alone for extended periods of time.  Perhaps we should take a month at the beach.  She would like that.  The pool, beach walks, take out coastal dinners, the constant roaring of the surf. . . .

Now I must rush.  I slept very late today and I have thing to attend to before my noon luncheon,  Here is the song the Dead played most in the concert life of the band, I think.  I may be wrong.  I am no Deadhead.  But I like the way they transformed it into a cosmic metaphor.  You can search the song on YouTube.  There are a hundred different live performances.  You will like the ones where the music fades out leaving only the crowd singing: