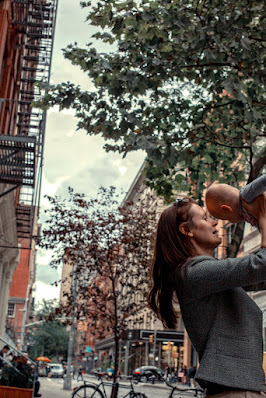 I made a fish stew for Mother's Day. I cut up an onion, some garlic, a large potato, a stalk of celery, and a bunch of carrots. Sautéed the onions and garlic in olive oil, then added crushed tomatoes and tomato paste, clam juice, bone broth (because that was the only kind I had), wine, and the chopped vegetables. A long while later, one pound each of deveined shrimp, scallops, and cod. Holy smokes! Served with crusty French bread.

We drank mimosas beforehand. What do you do after a meal?  We drank and talked.  We sit and talk every day, so. . . long pauses, looking around the room. . . . .

When my mother left, I took a nap.  When I got up, I poured a drink and lit a cheroot, fed the cat, and sat outside with her while she ate.

By nightfall, my nerves were shot.  The day had been gorgeous and dusk was even more so.  So beautiful. . . I was haunted.  Dusk is long now, lasting an hour or more, and I went indoors long before darkness.  I turned on the television and searched YouTube for videos about Errol Flynn and his decadent life and death in the presence of his teenage girlfriend.  He was considered handsome.  I got bored soon enough, and looking at the clock, decided on a very early evening.  I started season six of "Schitt's Creek," a mashup of "The Beverly Hillbillies," "Green Acres," and "Arrested Development."  It is a funny show, but I constantly found myself tearing up.  Just one more whiskey, then an entire nerve pill.  I hardly ever take a whole one, but I had the evening yips and jitters and knew it would be a disastrous night without it.

I woke every two hours, but I was happy.  I remembered my dreams, and they were pleasant.

But I am a mess, truly, unfocussed, easily distracted, slow and lazy.  I begin projects and follow them through for a day, maybe a day and a half.  I spend an entire day trying to sort digital files, but the next I am hand painting photos.  One day I buy hard drives, the next brushes and linseed oil.  Then I break out photo strobes and experiment making photos.  The next day, I am worn out and do nothing.  I decide to read.  I put on music.  I pick up the guitar, the ukulele, a harmonica. I read articles about suicide and LSD therapy.  I take solace in other people's disasters.

I am soon to be a year and a half retired.  Over a year of Covid.  A year of seeing almost no one but my mother.  A year of catatonia and naps.  A year without a meaningful conversation.

Sometimes now, I open drawers I haven't opened.  God, so many drawers.  There are the drawers of two desks, most of which I rarely go through.  There is an attorney's cabinet full of photo stuff.  Table drawers.  An old Russian pine armoire.  Two chest of drawers.  Bathroom drawers and cabinets.  Kitchen drawers.  Pine bedside tables. Then there are bookshelves crammed with things and boxes full of stuff crammed into closets.  I hardly ever look.  Every time I do, it is a revelation.  I must have some form of Alzheimer's because I never remember what is in them.  I never know what to expect.

Up until a few years ago, I still had a wreath of dried flowers sitting on top of the armoire from my wedding.

I opened a drawer on the "other" side of the bed looking for something.  I had stashed a bunch of photos in there.  I hadn't remembered that.  I put them there when I took them all down from various places in the house.  There was a long letter Ili had written to me years ago.  I didn't remember it.  The beautiful script, the sweet words.

What can you say to that?

I haven't any people to photograph, so I decided to begin a project about myself.  It is not a vanity project. I am showing myself in my most hideous form. . . naked, fat, broken, old.  It may not have been a good idea, this project.  I am fascinated by it, but it is depressing me as well.  We make ourselves presentable for the public, by and large, try to make ourselves acceptable.  My photos show every flaw, every wrinkle, fat fold, surgical scar, age spot. . . every broken, objectionable thing.  Every shortcoming.

I don't know if it is advisable to continue.  I look like a dying satyr.

I've become more bitter about my accident than I have been.  I can't do any of the things I used to or might want to now.  I can't swim, can't surf, can't climb, can't run.  I was an outdoor guy.  It was a big part of my persona.  Now I have a hard time sitting on the floor.  The left side of my body doesn't work well, and it is becoming more rather than less painful.

When my ex-friend Brando got sick in Greece, the doctors told him that his organs had worn out.  That was the same thing the coroner said about Errol Flynn.  His organs had just worn out.  It is what happens, I know, for some, sooner than others.

The Valley of the Shadow of Death.

I am going to have to shake this shit.  It won't happen sitting alone watching television and drinking scotch.  But I am having the hardest time making even the simplest plans.  I have a list of people wanting lunches this week, but I can't bring myself to committing.  An old colleague, indeed, supervisor, sent me a photo of myself from years ago, "Pontificating, as usual," she wrote with love.  There I was with purpose, with confidence.  "Just some boy I loved."

But what can I do?  I forgot to give my mother her Mother's Day card.  I will take it to her today.  We will sit and chat and watch the neighbors walk by.  I am her only child.  Her friends say I am a good son.