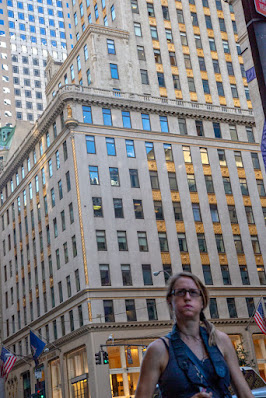 I spent last night trying to attach metal objects to my body to see if I had been magnetized.  I spent the better part of last night stringing together garlic bulbs to wear to bed.  I have Google Mapped all the 5G towers in the surrounding area.  You can never be too careful these days.

I blame much of our current problems on K-pop.

It is difficult to be silly.  It is hard not to be.  Yesterday I got some disturbing news about a good friend of mine.  He's been having some health issues and went through a series of neurological tests.  They told him yesterday he has Lewy body Dementia.  If you don't know what that is, just combine Alzheimer's and Parkinson's and throw in hallucinations and some other really horrible stuff.  It is incurable and practically untreatable.  It is the disease that plagued Robin Williams.  I can't imagine receiving such news, knowing that every day was going to be worse than the last as you hurtled into debilitating madness.  Most drugs that would otherwise help exacerbate Lewy.  Even caffeine and alcohol are out.  There is little to do but sit and stare and ride it to the end.

He is married.  She is freaking.

I mentioned this all to some friends.  They each have a litany of people they know who are suffering something debilitating.

My across the street neighbor is an anesthesiologist. His little dog loves me.  He can't walk by my house without her pulling at the leash and going nuts.  He says sometimes on his walks if I'm not out, she won't go anywhere and they just return to the house.  That dog makes me very happy.  Last night, I was just stepping out of the house with my cheroot and scotch when they entered the yard.

"Thank God you are here," he said.  "Timing is everything."

He is one of the nicest people you could hope to meet.  But what would you expect.  What is the best kind of doctor to be?  One without need of an office.  One who needs not see patients.  One who doesn't get calls in the middle of the night.  He picked the right specialty for sure.  And his wife is an attorney.  Rolling in the dough.  His beautiful daughter is now a pediatrician.  Somehow, I don't think that would be as easy a ride.

After our usual greetings, I asked him if spoons were sticking to him yet.  He, however, had not seen any of this on the news.

"Oh, you will," I said.  "A medical doctor just testified about that to the Ohio State Legislature.  She's a real card.  She reported that one of her friends got the vaccine and two weeks later her husband had a stroke."

He just shook his head.  I wondered how much damage this did to the medical profession as a whole.  I know that I, for one, believe half the doctors out there are these kind of nuts.  They are not scientists, after all, but rather practitioners of an applied science in their specialty.  At least that is my greatest hope.  My fear, however, is much deeper.

As an anesthesiologist, of course, he works every day in the hospital.  He told me he asked the head of nursing what percent of her staff had gotten vaccinated.  She said around 60%.  He was shocked, he said.  He couldn't understand it.  They offered the vaccine to the staff early on.  They didn't have to wait in line.  They just walked in and got shot.  But nope.

I didn't say anything about nurses and science.

At that same Ohio legislation, I saw video of the testimony of a nurse who brought her car key to show that she had become magnetized by the vaccine and that it would stick to her.  Um. . . hey, lady. . . car keys are made of brass.  They are not effected by magnetism.  For some reason, she was having a difficult time getting the key to stick, but she was undeterred and very, very animated.

I'm hoping the garlic will keep me safe.  Obviously there is some other kind of infection going around, probably brought by those alien spaceships the government is telling us about.  But this, I must admit, is like my childhood dreams, a shadowy world of gypsies and potions and magic spells.  I loved movies like "The Wolf Man."

But I'm not a kid any more, and I have reached an age.  I told my neighbor about the news I had just gotten from my friend.  He said that people ask him why we are seeing so much pancreatic cancer among people we know.  "We've reached that age," he said, "where diseases start to kick in."

All the cool kids got old, get sick, and die.  My friend and I were cool kids.  We played in the band together.  We played in front of large audiences, a few times numbering over five thousand.   We won't be doing that again.

The neighbor is about my age.  We shook our heads and agreed on what was important now.  But it doesn't matter.  One day, you know, it's going to be your turn.