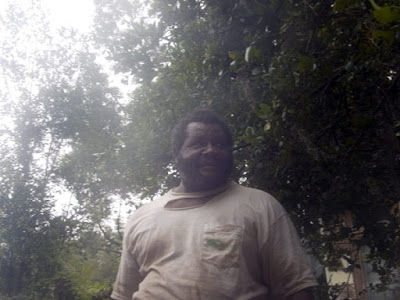 I didn't take this photo.  It was taken by a seven year old boy who had my camera.  This is Henry.  He was my longest relationship until about a year ago.  He was my yard man for three houses and thirty years.  Then one day, he just quit showing up.  I had no way of contacting him.  I didn't have an address, a phone number. . . nothing.  You might find that odd, but that is the way we worked.  He'd show up, and once a month I'd pay him.  When I met Henry, he was probably the strongest man I knew.  I don't mean lifting weights strong.  You just knew he could pull a small tree out of the ground with one hand.  That kind of strong.  When he came to do the yard, I'd always go out and chat a bit.  I never told him what to do.  He just did everything.  Sometimes I wouldn't see him for a long while.  He'd come when I wasn't home.  Sometimes this went on for months.  When I saw him again, I would pay him everything.  Sometimes he just didn't show up.  When I'd see him again, he'd say he went home to visit family in Jamaica or he would tell me his truck broke down or his equipment had been stolen.  I'd still pay him because he'd put everything back together just like new.

When he quit coming, I Googled him.  I found a phone number for him.  It was shared with a woman I thought, by the age listed, might be his mother.  There was an address.  I Google mapped it and saw a small, low rise apartment complex.  Parked there was what looked to be Henry's truck.  I thought I might call the number to see if Henry was o.k., but then I thought it somehow wasn't fitting.  It was winter, so the grass was not growing.  I waited two months.  Three.  Henry never came.  Four.  I finally decided he wasn't coming back and hired my mother's yard guys to do mine.

One day, I was walking by a house around the corner that Henry used to tend.  The fellow who owned the house was standing outside.  I walked over and asked him about Henry.  He had no idea.  He'd been in San Francisco for many months and had just gotten home.  I told him I Henry hadn't been around.

The next time I saw the fellow, he said he had called Henry.  Henry said a fellow, a relative--I can't remember which--was supposed to be helping him do the lawns.  Henry told him that he had to have a toe cut off.  Henry, I knew, had developed diabetes.  Over the last couple years, he moved as if he may have had a minor stroke.  His powerful right arm often hung limply while he pushed the mower with his left.

The fellow around the corner knew Henry's story much better than I.  He said the older woman was his wife, not his mother.  They had a son who had gotten a scholarship to the University of Chicago, that he had received a Master's Degree in Business and had moved home.  He got caught up with a group of druggies, he told me, and had become one himself.  A real waste, he said.  I had often wondered when looking at Henry if he, too, hadn't gotten onto something.

That was all a year ago.  Yesterday, driving by the neighbor's house on my way home, I saw Henry's truck in the driveway.  He was standing with his relative--a fellow you WOULD believe to be a drug addict--who was working on the lawn mower on the bed and tailgate of the truck.

"Henry," I shouted when I had stopped and rolled down my window.  He looked up.

"Stop by anytime, Henry, just for a chat," I said.

It was strange seeing him after all this time.  I always liked having Henry around.  As I say, he was one of my longest relationships.  But seeing him yesterday was like seeing a ghost.

The kid who took the photo is twenty-one now.  He only knew Henry from this house.

Last night was Sushi Friday.  I decided on that after a harrowing day with my mother.  It wasn't my mother who was harrowing.  First off, I thought the maids were coming, so I spent the morning preparing for them.  But they didn't show up, didn't write.  I went back and checked the dates.  Nope.  They come next week.  Uh-oh, I thought. . . a little cognitive slipping?  Given my friend's condition. . . .

My mother was taking me to Costco to get some things.  I was taking her, but she's the one with the membership card.  But first, we decided to get some lunch.  On property is a Chickin Lickin', so we decided to go there and get a sandwich.  Among the throng.  When we finished, I navigated the chaos of the parking lot to Costco's gas station and got at the tail of a very long line.  Was it worth it?  My tank was absolutely empty, so I was probably going to save a couple bucks.  But was it worth it?

Eighteen gallons of gasoline later, we made our way into the giant warehouse.  Friday afternoon, the place was packed with people wielding giant metal shopping carts through the narrow-ish isles.  They came popping out of every intersection, a stream of carts speeding random directions.  People seemed intent on staying in the middle.  I sensed anger and aggression.  My mother was quite content to wander up and down the isles to stop and look at things she wouldn't buy while I tried to maneuver the giant cart into some parking position, but no matter where I went, I seemed to be blocking somebody's way.  Costco is huge.  Time dragged painfully on, row after row of giant sized everything.  I grabbed toilet paper.  The package barely fit into the cart.  Coffee.  Some vitamins.  Was this worthwhile?  My mother was happy and excited that they were giving samples once again.  She wouldn't pass up any free food.

"Do you want one?" she'd scream to me standing some way distant.

I'd shake my head to the negative.  She'd reach over and get the second one.  She felt as if it was justified.

Back in the parking lot, it must have been a hundred degrees.  I couldn't wait to get home.  I needed a nap. But when I got home, I realized that the maids had not come, that I would have to make the bed.  I HATE making the bed.  I can never figure out which way the fitted sheets fit, which is the long side of the nearly but not quite square of top sheet and heavy comforter.  Putting on the king sized pillow cases has always flummoxed me.  When I had finally finished, the bed looked exactly like somebody had just slept in it.

I needed a drink.

In the end, it was too late to take a nap.  I remembered that I was thinking of ordering a Tushy Classic 3.0 bidet.  Everyone I know who has one says it is a "life changer."  Direct quote.  Many, many sources.  So I sat down to the computer to do my research.  Oh, fuck, it was funny.  It was so funny, of course, that I had to share with my unwilling friends.  How do you not share this? 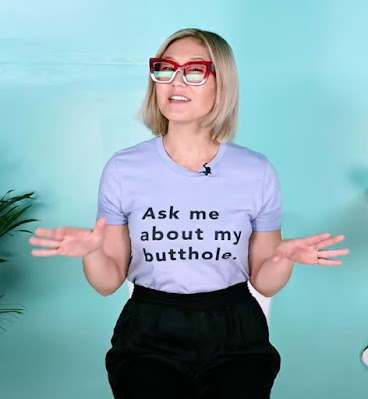 My rich Trumper friend said she was referring to her wife.  I replied, "Don't be an ass wipe."  Oh, I was breaking myself up, but he wearied quickly and asked me if this is what he could look forward to in retirement?  I said, "Hey, look--we all went to college, we just don't act like it."

It is very true.

My new bidet will arrive Monday.  After ordering it, I remembered the toilet paper.  I still had to put it all away.  It was then I found that it wasn't toilet paper I needed.  It was paper towels.  Given that I am getting a bidet, I may never need to buy toilet paper again.

We'll see if the bidet changes the blog any.  Perhaps, you know,  I might not be a shitty asshole any more.