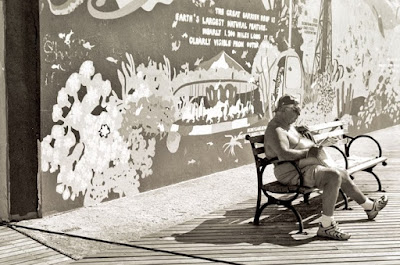 On Friday, I asked my mother if she would like to get some tacos for lunch.  There is a place not far from her house that is part of a small chain, but the fish tacos are not awful.  She said sure.  It was the first time the two of us have gone to a restaurant since the pandemic started.  The place is very open and most of the seating is outside, so I didn't feel I was endangering dear old mom in any way.  She got a table on the porch while I went inside to order.

I like kids.  I am great with them.  They like me probably because they think I'm just a bigger version.  When I got into line to order, the man in front of me had two boys, one about seven and one much younger, maybe three.  I'm not that good with kid ages, but the man was holding the younger one, and I could tell it was tiring.  The little boy's eyes popped open when he say me and he started pulling on his red t-shirt and smiling.  "I got Mickey Mouse," he said.  "I got Mickey Mouse."  It was true.  There was a picture of the famous rat on the t-shirt.  I smiled back and said, "Cool, where'd you get that?"  For some reason, my talking to the little boy seemed to irk the fellow.  Rather than turning to me and smiling a friendly smile, he jerked the boy into a different position.  It didn't matter to me.  I was just being friendly.

The long line barely moved.  All the workers were twelve years old.  You know what I mean.  They moved slowly and seemed to find great difficulty in everything.  A man asked for a straw.  The girl at the counter looked around like she'd never seen one before.  The man eventually picked one up out of the container on the counter.

I got to stand behind the man and his two boys for a long time.  Eventually, the man's arms gave out, and he gave the little boy to his son to hold.  That became a game of the little one trying to bite the bigger one, both of them screaming.  The man seemed not to notice.  I was ready to punish someone.

As I say, I like kids.  Often, however, I disdain their parents.

Finally I got to the head of the line and made my order, after which I was given a plastic card with a number on it that I was to place in a metal stand.  My food would be out shortly.  My mother had taken a seat facing the busy road we had driven in on, so we decided to move to another table.  The restaurant was full, and as we made our way to the other side of the porch, my mother spotted a table near the man and his two boys who were sitting with their disabled mother.

As we sat waiting on our food, my mother said, "You can tell people put on weight during the pandemic.  Everyone here is fat."  I looked around the packed restaurant, and she was not being hyperbolic.  Everyone was fat.  Not only that, but they were poorly dressed.  Everyone had on a pair of shorts and some worn out t-shirt with advertising on it.  Years of washing had faded most of them to the point where you could no longer tell what was being advertised.

"Obviously nobody works," I said.  "None of these people are going back to the office."

They were't retirees, either.  I began to wish that my mother hadn't brought them to my attention.  The two boys with their father and disabled mother were screaming.  The parents took no notice.  I imagined this was the sound inside their home day and night.  Why was this man not working?  Why weren't any of these people?  I began to calculate the politics.

"These people are Trumpers," I said.  "Can you imagine what goes on inside their heads?  How many books do you think any of them have read?  It is all commercial t.v. and millions of hours of commercials playing over and over again.  It is f.m. hit radio stations.  I can almost hear the noise inside them."

They were a loud and cruel people, I thought, self-satisfied and mean, full of hate.  Where once they had been the old "salt of the earth," they were now a paranoid, conspiracy theory crowd.  These were not the workers of the world.  These were conservative Trumpers on the dole hating immigrants and minorities who were stealing their country, their money.

Even my mother, a hillbilly Trumper, was dismayed by them.

"Where do you think they are coming from?" she asked me.  I grew up around people worse than this, but now that she has moved into a nice neighborhood, my mother has become somewhat snobbish.  She is like me.  She doesn't wish to be around her kind.

I don't know if it is the result of staying away from people for so long or if people have gotten worse, but neither my mother nor I were happy among the throng.  When we got back to her house, she gave out a big "Pshew.  It is good to be home."

There is a lot of entitlement in America now.  And Trumpers are only doubling down.  I have been thinking that the prospect that Kamala Harris could be the next president was driving them.  Then this morning, I saw this in the Times.

There it is.  Out in the open.  And I have to agree, at least right now.  People are facing Future Shock all over again.  Pandemics and Movements.  The world they left is not the one they are returning to.  There is bound to be a rumble.

But what can we expect?  These are End Times for sure.  The earth is overpopulated and nature is about worn out.  The seas aren't boundless or infinite and the land has returned to mud and dust.  Liberals have become fascists and conservatives were already there.

It is impossible to think of people sitting down to watch a debate between William F. Buckley and Christopher Hitchens any more.  That is what I did, however, last night.  Old Buckley sure was wary of Hitchens.  I'd never seen him so tentative and careful before.  When that was over, I watched Hitchens dis Islam as being the stupidest of all religions for awhile, but I couldn't follow the references and began to get sleepy.

The state of the nation really depresses me.  But all I have to do is think of the rest of the world, to think of China or Malaysia or India or Nigeria or. . . .

We're just fucked, it seems.  But that's probably just old guy talk.  Things will be fine.  We'll figure it out.