How to Make a Killing

I wasn't feeling oh so well last night.  I hadn't felt particularly well for a couple of days, and it was effecting my psyche as well.  I didn't feel like cooking, so I ate simply, an avocado and a bowl of lentil soup.  I just couldn't seem to drag myself off the couch.  The weather has turned bad here.  It isn't horrible yet, just bad--steamy, cloudy, hot, with spotty rain.  Sitting outside is no longer pleasant.  And so. . . the couch.

I watched the news.  I don't know why I do it.  I don't really watch it.  I record two shows and fast forward through most of them, but it is still enough to irritate me.  We are not being given news.  We are being fed opinions.  Each night is a continuation of the last.  The right gets amped up and the left gets depressed.  It only takes ten Nazis to beat a hundred Bohemians.  Maybe a thousand.  The left is made up of wimps, self-loathing masochists, and some self-interested agenda-driven camel herders who are garnering money from white guilt plebes.

I wouldn't normally say such outrageous things, but as I sat sickly on my couch last night, I turned off the news and ran into a Robert Crumb interview on YouTube.  And that is how I spent the rest of the night--watching Robert Crumb.

What a weirdo, right?  I mean Crumb, not me.  If you have never watched "Crumb," the documentary about his life made in 1995, you missed something (link).  It is weirdly fascinating.  It is a train wreck from which you can't avert your eyes.  But twenty-some years have passed since the making of that movie, and Crumb is now older and more. . . something.  Well, he is rich for starters.  Not Bezos rich, nor Gates rich, nor Zuckerberg rich, but he has enough money to feel safe.  And though he is reviled by the woke, he is revered by others.  He is credited with being the founder of a genre, the greatest of all Underground cartoonists.  And of course, Europe loves him more that "we" do. 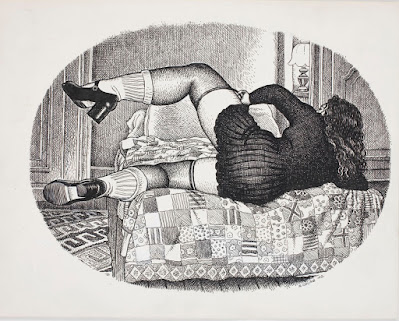 He is still weird, but he has mellowed.  I found it fascinating that he credits much of that to meditation which he has been practicing now for years (link).  Living in rural France surely has a settling affect, too.  Probably the greatest influence, though, is his wife, the cartoonist Aline Kominsky (link).  I had never seen her before, but I was immediately knocked over.  If Crumb is the cartoon genius in this duo, she is obviously the life coach.  Her open honesty is both fascinating and entertaining.  She is the sort of woman who would drive many of my friends nuts.  I, however, had an immediate attraction. 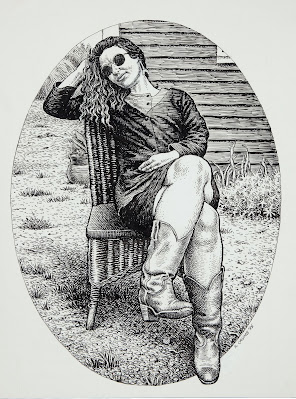 Once he accepted that he didn't fit in, Crumb says, he was free.  When he quit trying to please others and just did what he wanted to do, his work took off.
I like Crumb the way I like Bukowski.  There is a non-discreet charm to what Crumb refers to as the "lurid, low-brow" stuff.  They are patron saints, of sorts, of all outcasts and losers, picked up first by the underground and then made by elites.  Neither of them, however, had any attraction for either group.  It is what happens when you decide to be the genius in the crowd.  I guess.
Hours later, skipping my evening meditation due to fatigue, I took myself to bed.  Crumb caricatures haunted my dreams and nightmares I am sure.
If I feel well enough and if there is light, I might try to make some Polaroids today.  If not, there is always tomorrow.  No, that is not true.  There will not always be a tomorrow.
Posted by cafe selavy at 9:10 AM