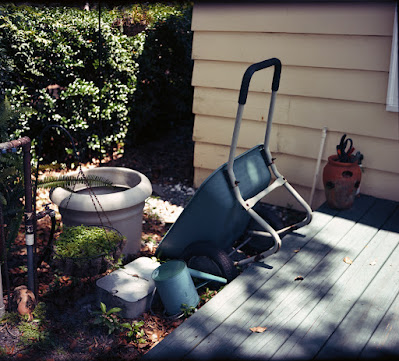 Still, it was a harrowing day with mixed results.  There was the mother/son morning, of course, and then the gym.  I didn't get to my house until noon. I was sweaty and sticky after taking a two mile walk following my workout, but I wanted to get started with mixing chemicals before I showered. I had to think through everything I needed to do.  The past year and a half has wilted my brain.  I no longer think through complex problems.  I daydream mostly, if even that.  Maybe I'm down to just identifying.

I found thinking through the entirety of the day's processes irritating.  Early onset dementia, probably. I would need to make several trips to the garage and back.  First, I needed to load the film onto the developing reels in the dark tent.  I hate loading film onto reels in the dark tent.  My arms go in up to the elbows while my eyes are in the light.  There is a disconnect between what you see and what you do.  It makes me very irritable.  I usually have trouble getting the film started onto the reel, and if that happens, I have to unspool it and start over.

Of course, I didn't have a church key.  I couldn't find it last time I developed film and buying a new one slipped my mind.  I would have to improvise.

Three rolls of film, one 35mm and two 120mm.  And by gosh, everything went pretty smoothly.

Back to the kitchen to develop.  Oh, shit. . . I forgot the developer.  Back to the garage.  I was using a very dilute Rodinal mix and a stand development technique that takes an hour.  Once the chemicals go in, you just let it stand.  So while the Rodinal was doing its job, I mixed up the color chemicals.  They had to be mixed in water precisely 102 degrees.  I was nervous.  This is the sort of thing I am bad at.  I am not a precise person.  In zoology labs, my fetal pig dissections looked like they'd been done by a pack of starving rodents.  I'm good at painting the middle of the wall.  Trim work. . . not so much.

First the developer, then the two part bleach and fix.  As I was mixing them, an Amazon truck pulled up.  My sous vide cooker had arrived.  I needed it to maintain the water temperature when I developed the film.

Back to the garage and the dark tent to unload the 4x5 film and get it into the developing tank.  Four sheets.  I'm getting good at it.  No problem.

Back to the house.  I unpacked the sous vide.  The black and white film had been standing for half an hour.  I gave it a couple inversions.  Another half hour.  I had time to go to the bank and deposit a check.  When I got home, there were only a few minutes of development left.  Then the stop bath, fix, wash.  But the wash water kept running red.  WTF?  Uh-oh.

When I pulled the film out, it was blank.  I'd fucked up.  The container I thought was holding Rodinal wasn't.  I had poured something else in mistakenly.  Shit piss fuck goddamn.  I was crestfallen.

I carefully labelled the chemicals I had just mixed.  Now it was time to try my first attempt at color.  I had little confidence that I had mixed the chemicals carefully enough.  Even if I had, I was pretty sure the colors would be muted and off.  I filled a pan of water and put the sous vide in, set the temperature, poured the chemicals and put them inside.  I waited for the temperature to come up.  I poured.  I agitated.  First the color developer, then the blix.  Three and a half minutes.  Eight minutes.  Rinse.

The first one came out of the tank. 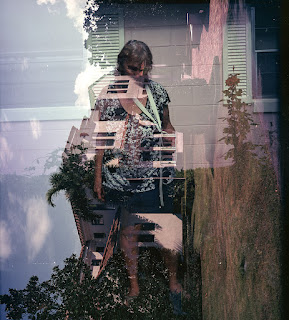 Mom.  I had taken the photo in the morning.  Wtf?  I had just loaded the film the day before.  How? 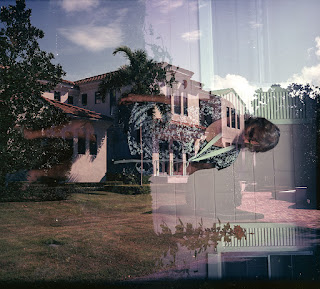 O.K.  I guess the film had already been exposed.  I must have put it in the box to send off for developing and then forgotten about it.  Many people liked the double exposure of the milk can.  Nobody will like this one, especially me. 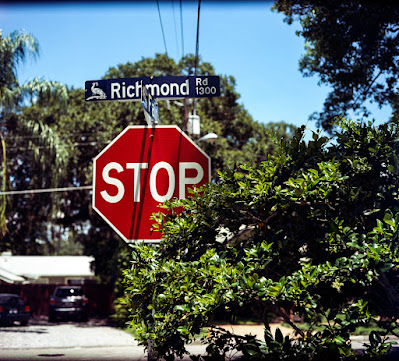 I left them to dry while I greased myself in coconut oil, hair and body.  Just part of my beauty process.  Twenty minutes later, I was in the shower.  Hair washed and conditioned, body degreased, I dried and dressed and began cleaning up the mess in the kitchen.  I looked at the clock.  I would barely have time to scan the negatives before heading back to cook dinner for my mother.

So, what you see is the result of half a day's work.  Two medium format color pictures reduced to the resolution of an iPhone.  If you take into account all the chemical mixing I did yesterday, it is more like a full day's work.  Was it worth it?  Well. . . it makes me kind of happy.  The colors pop, the images are clear, and there is that medium format look to them, sort of, maybe, I think.

I will do more this weekend.  Now that I know the process works, I need to make something of consequence.  No more "test shots."

And when I don't make anything of consequence, I will follow Q into the world of iPhone photography.