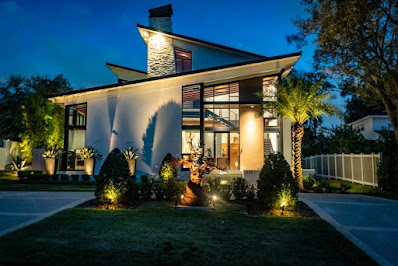 In my neighborhood and the neighborhoods that surround it, they tear down old houses like mine and build something like this.  Pretty.  Chic.  I'm not saying they shouldn't.  Old houses are a lot of trouble and a lot of work.  This house is just a lot of money.  Well. . . they both are.

Watching a lot of t.v. with my mother now, I've noticed a difference between old shows and new.  In old shows, there were more old people, more "ordinary" looking people, people who weren't so glamorous.  It struck me when I was watching live coverage on The Weather Channel about Hurricane/Tropical Storm Elsa.  A scientist from NOAA was talking about atmospheric conditions.  He was older and not at all attractive.  And it was jolting.  I watch enough CNN to know that you must be a pretty, young woman to do live television coverage now.  You can tell that even Erin Burnett is miffed by them as she interjects, interrupts, and cuts them off in their stories.  Her "thank you for that coverage" statements are delivered in a snide tone with a smirk.

Husbands in old t.v. sitcoms were always goofy looking.  Take Darren of "Bewitched."  No heart throb there.  We were used to seeing leading men who looked like a sack of potatoes--Richard Boone, Carl Malden, Peter Falk--and maybe one pretty woman on a show.  That Girl's Marlo Thomas was pretty, but she was the only one.  "Ali McBeal" was the first t.v. show I remember that really exploited the beautiful women and average looking men formula.

I don't know.  I shouldn't be writing about this.  I don't watch enough t.v.  Maybe there are contemporary shows that mirror "Maude" or "Golden Girls."  But "they ain't no kids watching it," as they say.  You don't want to be ugly on TikTok or whatever platform influencers are using now.  There are no ugly kids at the Y where I go.  Everyone is beautiful, just like the movies.

O.K.  I've gone out on a rotten limb here.  I can feel it breaking.  I was better off talking about houses as houses and not as metaphors.  Some old houses get makeovers and updates.  Just like old people on the screen.

I took that photo somewhere in the past year and a half, back when I could still manage to get myself out of the house at night.  I like images I take just after sunset, deep blues and the yellowish oranges, the artificial light.  Selavy.

Oh--you all have the day off today.  Well, you who live in America, the old U.S. of A.  About half my visitors don't.  They have their own National Holidays to contend with.  And if you are anything like me, you avoid them as much as possible.  It wasn't possible here last night.  My mother's backyard neighbor shot off several thousands of dollars worth of fireworks for hours.  My mother doesn't want me to piss off her neighbors, so I just had to put up with it.  Whatever.  By eleven, things had calmed down and I went to bed.

I have much to do this morning.  I am going to empty out the refrigerator at my house and clean it.  I must give in to the idea that I won't be living there for awhile.  I've given the maids the month off.  The cat has already shunned me.  She eats the food I put out for her, but she won't come anywhere near me.  She just sits in the bushes and glares.  I am in transition, one foot on the dock, the other on the ship as it pulls out to sea.  My commercial-free life has been interrupted.  I'm sure to be made mad by advertisement.