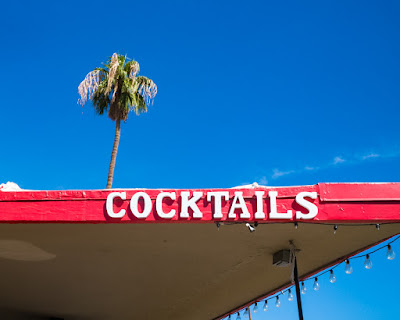 I left my mother yesterday afternoon and went to my house to take care of chores that were needed there.  I had emptied out the crispers in the refrigerator, but some of the vegetables had rotted so badly, there was a cold soup in the drawers.  The mushrooms had really done a number, but there were beet leaves glued to the sides as well.  I took them outside, hosed and scrubbed them good, and left them to dry.  I chucked a lot more mystery food, too, and cleaned the shelves.  I ran the printer, checked the mail, and updated my computer which has been crashing on its own, in its sleep, for reasons unknown.  Scary.  I showered and shaved and fed the cat.  It was mid-afternoon.

I wanted a cocktail.

I thought about going to one of my favorite bars for a drink and some lunch.  I haven't been there since my birthday just prior to the Covid outbreak.  I Googled their menu and found that they were closed.  Son of a bitch.  What to do?  I tried to think of other places I might go, but couldn't.  I am out of practice.  No other bar in town makes cocktails as good as this one.

I decided to make my own.  I had ingredients for a Margarita.  Bing, bang, bong.

There are two reasons for drinking a cocktail.  The other is letting your friends know.  Out came the phone.  A little manipulation, and my cocktail/photo masterpiece was zeroes and ones in the internet ether.  A bit later, so was number two.

What can spoil the fun of drinking more, however, than when your friends are not.  My travel/art buddy texted back that this was the first dry day at his house.  Q has been a dry drunk for sometime now.  CC is still taking his cocktails, however, but one and a half out of three isn't a great number.  It gets worse.  My replacement has substituted weed for calories, or so he says.  A gal pal doesn't drink during the week.  Another friend is experimenting with his mental health and LSD.  Health issues prevents my old college roommate from even drinking beer.  What has happened, anyway?

When I got back to my mother's, I poured a scotch and lit a little cheroot.  My mother wasn't hungry and was going to eat cottage cheese and pineapple for dinner. I didn't feel like cooking, so I went to a little Peruvian dive up the street and got take out chicken, fried plantains, black beans and rice.  Well. . . it used to be a Peruvian restaurant.  That doesn't sound very Peruvian, though.  But the portions are big and the price is right.  Back at my mother's, I ate half of it with a beer.  Then an after dinner drink.

You see what I'm saying?  Perhaps it is time to limit myself to the after dinner scotch.  I mean only that.  I don't want to quit drinking, but maybe I shouldn't be drinking as much.  I can't smoke the ganja like my art dealer.  After the wreck, my lung can't take the smoke.  I don't enjoy eating it much.  It just takes too long to kick in and then I eat more and wake up in the night all kinds of weird.

But I have gotten unforgivably fat.  It makes me sad.  Where is the skinny lad who could break a beautiful woman's heart?  He's been eaten by a drunk, it seems.

I'm not good at absolutes.  Abstinence is the root of all evil.  But look what happened to Falstaff.  I don't want to meet up with my friends for some celery juice, but maybe I should be drinking a little more of that at home.  You know--chlorophyl!  I need to settle in at mother's.  Fill the fridge.  Kambucha.  Jamba Juice.  Elixers of Life.

Last night, I watched "The Wild and Wonderful Whites of West Virginia" with my mother.  I'd seen it before, but I wanted her to see it.  I grew up with those people.  My mother's side of the family are full of such hillbillies.  Watching their constant ingestion of anything that would get them high. . . well. . . it wasn't attractive.

Still. . . a sophisticated cocktail is another thing.  Not the kind you get at Pete's Hideaway, but the one you used to drink at the old Oak Room in Manhattan.  I have a photo of Q sitting with his current ex-wife in the window there somewhere.  I am outside and he has turned to look through the tall window at me.  Why was I outside?  Was I meeting them there?

O.K.  No more Pete's.  Cocktails are sophisticated things.  I'll limit myself to those wonderful moments.  Sucking up the scotch on the couch at my mother's house could do me in. 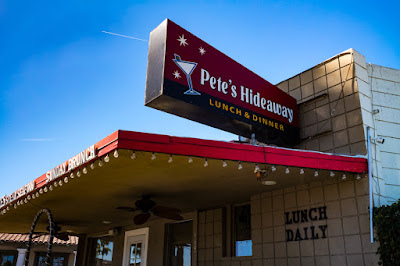