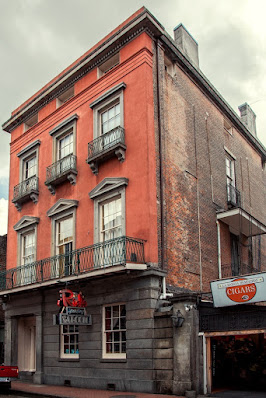 The green light on top of the black plastic rat zapper had been flashing for a couple of days.  One of my mother's neighbors had brought it over when she learned about "the rat."  She showed me how it worked.  She put in the four double D batteries and turned it on.  The green light flashed for a moment to let you know it was working, and then it went off.  Then she turned it off.  After she left, I put some peanut butter on a piece of cardboard and stuck it in the back of the long, black tunnel.  I was a little worried.  What would happen if I stuck my hand in it when it was turned on?

Still, I had no confidence in the thing.  I just couldn't believe those batteries were powerful enough to zap a rat.  Maybe give it a jolt, sure, but kills it?  Nope.  I just didn't believe it.

Still, I put it beside the refrigerator.  And then I set some other, more conventional rat traps, too.

Days went by.  I checked the traps.  Nothing.  Where had that little fucker gone?  Perhaps he would be gnawing on my toes one night while I slept.

Meanwhile, the little green light on top of the rat zapper was flashing.

"What does that mean?" my mother asked.

"It must flash green until you catch a rat.  Then it probably turns red."

That made sense to me.

Then yesterday, my mother said, "I smell something over by the refrigerator.  Do you think he might have died somewhere behind it?"  I didn't pay much attention to her until later when I went to the refrigerator.  I smelled it to.  That is when I decided to look in the rat zapper for the first time.  I picked it up and stared into the tunnel.  HOLY SHIT!  I just about jumped.  There it was.  The little fucker had been fried!

I couldn't get over it.  For the entire day, every time I thought about it, I chuckled and smiled.

That was late in the morning.  I hadn't slept well at all the night before and my day was running late.  It wasn't until noon that I was ready for a trip to the gym.

"Mom, I'm going to go to my house after the gym.  I'm going to grease up with coconut oil for about twenty minutes, then take a shower, wash my hair.  After that I have some things to do.  I'll go to the grocery store.  I won't be back until suppertime.  Will you be alright?"

That's right.  I greased up with coconut oil.  I'm supposed to do that with my hair, so I just go whole hog.  That's one of the beauty secrets that makes me so damn attractive.  Ho!

I have to admit, I never understood the difficulty bleached blondes have with washing their hair before.  Ili used to tell me I didn't understand how long it took to wash her hair.  '

Oops!  I guess I'm not telling tales out of school.

But now I understand.  Shampoo and bleached hair just collide in a tangled mess.  I get it now, and I understand why some women go to the salon to have their hair washed.  Let somebody else do it.  I would apologize to Ili now, but of course. . . .

I had thought to take the cameras out for a bit in the afternoon, but as soon as I oiled up, it began to rain.  And it rained.  For the rest of the afternoon.

So, having oiled and bathed and dealt with my very blond hair, having dressed, without hope of making photos, AND. . . trying to avoid afternoon drinking. . . I did what all kids do on a rainy afternoon.  I turned to the computer.

Out of curiosity, I Googled "Twinsville Festival" to see if the Twins Festival is happening this year.  And indeed, it is!  I perused the website wondering if my mother would be well enough for me to go in mid-August.  Maybe.  What the hell.  I decided to submit a form to get a press pass.

Drats!  I had missed the deadline for submission by two days.  How?  Am I cursed?  Am I never to be allowed to take photographs again?  What the hell, I thought.  I'll apply anyway.  I filled out the form, told them why I would be coming.  Then. . . I changed the date that automatically appeared at the top of the form.  I didn't think I could, but I did.

Now I wait to see if they send me an email telling me that they don't want cheating liars coming to their honest American festival.  On the off chance, however, that I might get the press pass, I need to prepare.  Twins, for God's sake.  A whole field full of them.  I'll need to think this over and decide what it means metaphorically, symbolically.  A little research will be required.

I wonder what other sorts of cool festivals there might be this summer?

I'm still high from the rat zapper.  I can't believe it worked.  Poor little rat.  I hope it went quickly.

I am still curious about what would happen, however, if I stuck my hand in there.  I'm not curious enough to try it, though.  It might make a good party trick.