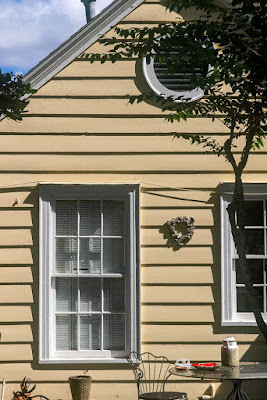 The day is off to a poor start.  I woke last night at 2:30.  You know how that goes.  I didn't get much sleep. I lay and thought of many things in my life from the way back, those mid-years when I thought I was really something.  There, however, in the infernal and sleepless darkness, weird truths emerged.  I would doze a bit, toss and turn, think some more, dream-like things, check the clock, etc.  This went on interminably, it seems, but of course, exhausted, much too late, I had to force myself out of bed.  It was long after eight.

My mother came in from talking to the neighbor whose daughter had made her some preserves.  She asked me how I was doing.

"In terms of what?" I asked.  I could have simply said "fine," of course.  My voice was raspy and my head sounded more solid than it should have like an old dog barking.

"You slept so late," she said.

Yesterday should have been different.  I went to the gym early hoping to get in a walk after my workout, but the skies opened and the rains came.  Unpredicted.  When I left the gym, the a.m. rains had done what they do here, made the air a sauna.  A.M. rain here can be a killer, p.m. rains a lifesaver.

Back from the gym, I needed to rush in order to eat and get showered.  I had to take my mother for her therapy appointment.  She likes her therapist, and so do I.  He is nice and he is gentle and he seems surprised at how strong and flexible my mother is at her age.  That makes a big difference to her, I know.  But I sit with my mother for the hour while "vintage" or "classic" rock plays too loud in the background.  A man my own age who was rehabbing a broken wrist looked at me and smiled.

He thought we were in league, I guess, thought we both enjoyed such music.

"Must be a lot of old people here," I said.  That could be the only explanation.  None of the therapist looked over thirty.  A Jimmy Hendrix song came on.  I looked around.  Sure.  They must be playing this for the clientele.  Hendrix was preferable to Led Zeppelin, but I didn't say anything to the fellow about it.  I didn't tell him I'd much prefer "Something Blue."  I just grinned and nodded.

As so often happens, when I woke from the nap on the couch, I felt lethargic.  My body was heavy and my thoughts were slow and muddled.  I needed to get to my house and look after the cat.  I needed to do some shopping for dinner.  I needed to run the printer.  I walked out to the garage where my mother sat in her swivel rocker looking out at the street.  Somehow, miraculously, the air had cleared and cooled.  The light was a perfect Hopper, sharp and bright, the shadows clear and deep.  I should be out making pictures, I thought, but the time was late and I had chores and duties.  As I drove away, I couldn't shake the sleep away.  It was as if something had invaded me.

The cat was on the deck when I got home.  I tried to talk to her, but she is pissed at me.  I could see that the neighbor had fed her in the morning.  She gets food but no attention.  Even though she pretends to disdain it, she, like all things, requires it.  The angle of her eyes reveals her displeasure.

I have not been printing images for a long, long time.  The black channel of the print head is about 30% clogged and I either need to make the $1,500 repair or buy a new printer.  I wanted to make some prints, though.  I tried, but truly, I have lost my skill.  Updates in software, changes in protocols. . . I don't know? But I kept making mistakes.  Big mistakes.  30x20 inch mistakes.  I just couldn't get the settings right, it seemed.  If you don't print, it is difficult to explain, but getting the colors of the print to match the colors on the computer monitor is difficult.  If the color cast is wrong, the print is worthless. Matching profiles to paper, deciding what algorithm will drive the color processor. . . yada, yada, yada.  And it takes a long time for the printer to make a 30x20 inch print. When I had the studio, I could do other things, but sitting in my garage listening to the printer's drone. . . .

Making a print that large on good matte paper uses a lot of ink.  I mean. . . cha-thing!  You can suck up forty or fifty dollars worth in a couple mistakes.  It can be maddening.

When I finally emerged from the garage, I had a reasonably satisfying print.  The sun was bright, the air cooler, the light wonderful.  The cat was still pouting.

I went inside and picked up one of my photo books and brought it out to the deck.  It was a book of Frank Horvat's photography.  I much admired his fashion photography from the '50s and 60s.  He was a pioneer in the manner of photographer William Klein.  Klein became more famous, but much of Horvat's work I find better.  Back when I was cranking out my own work, I used to write to photographers whose work I admired.  I wrote to Horvat, and for a brief while, we corresponded.  He was a very nice man in letters.

I thumbed through the pages looking at the color photographs he made later in life, street photography on trips to NYC, and reading portions of his journal.  I came across this. 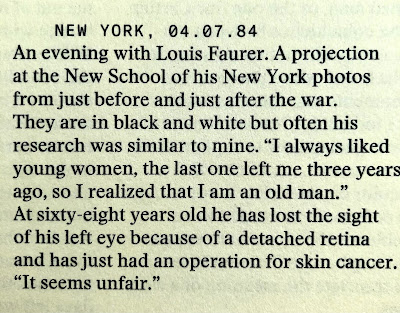 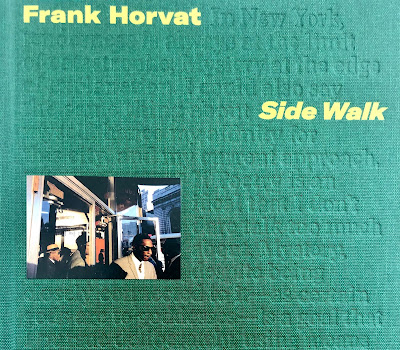 Ah, shit.  And so it goes.
It was time to move.  I went into the house and placed the book back on the shelf.  I grabbed the cat food and filled the cat's bowl.  I grabbed my keys, locked the house, and walked to the car.  The cat walked forward toward me.  She did not want, I understood, for me to go.  She takes comfort from my sitting with her on the deck.  I talked with her long enough that she turned away and approached her food.  I looked back at the house, the light falling hard upon the wooden siding and thought again that I should be out making pictures.  I grabbed a camera out of the camera bag, one of the Leicas with a 90mm lens on it.  I framed up the shot and gently depressed the shutter.  I looked at the image on the digital screen.  Oh, my. . . yes. . . I should be out taking photographs.
This morning when I downloaded the picture, I was completely unimpressed.  Sadly so.  But I must post it anyway.  That is the way the day begins, late with a lingering malaise, a hangover from the night before.
Perhaps today, I will begin to concentrate on my diet.  I have grown fat.  I disgust myself.  But calories are all I have right now, my only pleasure.  I had decided that I would indulge myself.  What did it matter?  Food and drink.  But we all know how that works out.  I must begin to pay attention.
I feel like Faurer, I'm afraid.
"It seems unfair."
Posted by cafe selavy at 10:09 AM