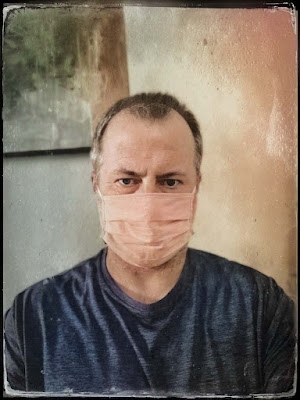 There is a new tool in Photoshop that colorizes black and white images.  Q posted the b&w version on his blog today (link).  I ran it through the new tool and came up with this.  It will be a new Instagram sensation.

I got a message from my old boss at the factory last night.  She once had a student intern working in her office which was right next to mine.  The girl was sweet and fun and spent a lot of time hanging out with me.  Oh. . . those were the days.  But last night, the message said that the girl, now a woman, was living in Oregon and was a pretty competitive bicyclist.  She had been hit by a drunken driver.  The damage is terrible.  Nine broken ribs (I only had seven), three of which they plated (I only had two).  Broken right femur, left tibia, and left arm, all now with titanium implants.  Broken feet.  They had to fuse two of her spinal vertebrae.  She has feeling in her broken arm now but still has not been able to move it.  My old  boss thought I could relate.  A few emails have gone back and forth.  It is terrible what can happen.
It took me back, first to the images of her as a young woman, then to my own accident.
I took this picture while narcotized a few days after being hit.  I had my iPhone. 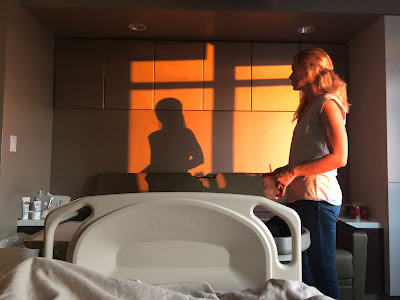 Even on death's door, I could not quit making photographs.  This is my hospital room just days after I got crushed.

What possesses?  You have to ignore the tragedy, I guess, and focus on the future.  You make deals with yourself and say it will be O.K.  But further tragedies always loom.  It could have been better.

She'll have a hard row to hoe.

I was lazy yesterday.  When I got to my house, I felt overwhelmed.  My kitchen floor and countertops are full of photo chemicals, developing tanks, spools and reels and funnels and measuring cups.  I had too many plans.  I took a shower and decided to do just one thing.  That is all I had to do.  Just load some glass plates into the glass plate holders, then try to make a photograph with the 4x5 studio view camera that I have owned for more than a decade and never used.  It has an old brass lens I bought on eBay then that I wanted to use for making wet plate images.  I took it out of the closet where it has lain for all those years.  I must never have tried even to focus the camera after I mounted the lens.  I put the camera on a tripod and tried to focus on the back screen.  It wouldn't.  WTF?  After futzing with it for awhile, I realized that the lens would only focus about three feet away at the farthest.  On a bellows?  For the life of me, I can't figure this one out.  But at three feet, things are sharp.  So I loaded the glass plates.  I would take a chance.  I've never really had luck with these glass plates before.  They are super slow at a rating of iso 2.  I've tried, but never have gotten an adequate image.  I had little hope this time, but I would spend my afternoon trying.  The lens has no shutter, nor, of course, does the camera, so exposures are just a guess.  I had two plates.  I would count two seconds on one and three seconds on the other.  Just guesses.  I don't even know what the aperture of the lens is.

I took the rig outside.  Yup.  Another photo of the milk can.  Still just testing.  Took one.  Took the other.  Got the developing tank and went to the garage and the dark tent to move them from the holders to the tank.  Came back and Googled developing times.  Mixed the right chemicals.  Etc.  I rotated the tank every minute without hoping.

Later that day. . . WTF?  For the first time, it worked.  Both plates have images.  I will scan them today and see how they turned out.

But I had to fly.  I had to get back in time to take my mother to therapy.  She is doing well, thank you.

Then I cooked dinner.  We tried to watch the news, but there was none.  They are saying the same things they said six months ago.  We turned it off.

A couple hours and a few episodes of "Blacklist" later, it was time for bed.