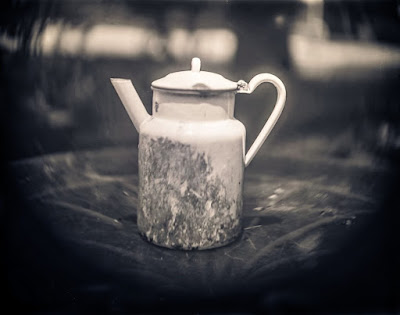 I should call this blog "The Milk Can and Wheelbarrow Diaries."  But here is the photo I took with the weird brass lens on a glass plate and what I wrote about it on some Large Format Photography sites.

Experimenting. I have an old brass lens that I bought fifteen years ago on eBay before I knew anything at all about large format photography. I still don't know what the lens is. I pulled it out and put it on a 4x5 studio camera and shot it on a J. Lane glass plate. Just guessed at exposure. . . one thousand one, one thousand two. . . . The maximum focussing distance with the lens is only about three feet. It has a focussing knob, but even with the bellows completely contracted, that's it. I'm still a moron about most of this. But even a blind pig finds a truffle once in awhile they say. Me. . . I got an image.

A fellow responded to the photo and message and said that the lens was probably an old projector lens.  The old Magic Lantern.  Cool.  But despite advice, I still haven't been able to get it to focus at distances over three feet.  I am a dunce, of course.

I am slouching toward making a "real" picture rather than a test.  I am.  I really am.  But these are treacherous times, and I have no humans to shoot.  I guess I need to make some kids if I want a steady subject.  I could be like Sally Mann.

There is danger in my experimenting, though.  Now I want a "real" antique brass lens made for cameras.  When my old pal Ed Ross died in 2016, I wanted to buy his lenses.  Isn't that awful?  But I did.  I didn't know who to contact, however.  Yesterday, thinking about lenses, I thought about Ross and did some Googling to remember what lenses he used.  Serendipity, I found a photographer who knew Ross who had gotten one of his lenses.  It was like a blow to the gut.  Again. . . awful, right?  The lens is a Dallmeyer 3B.  They are extremely difficult to come by.  I found one for sale online for $3,000.

There is danger in desire.  And, of course, I haven't even made a memorable large format picture yet.

I ran one of the black and white photos from the other day through the new Photoshop tool. 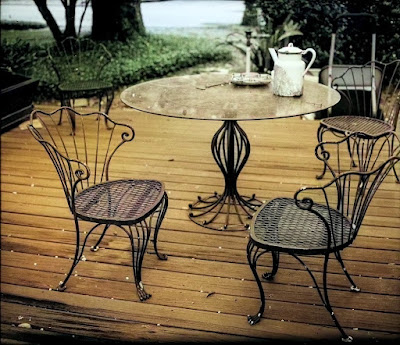 It's funny that it turns my deck into a natural wood color.  My deck is painted green.  There is something spooky about this colorization tool, but just about everything digital is becoming so.  When I was a kid, I used to watch Walter Cronkite's "The 21st Century."  I loved the show, but old Walt never warned us about the dangers we would face.  He just promised me a flying car.

I want my flying car.

Desire.  Can I tell you what I really want?