A Dull Posting, A Haunting Photograph 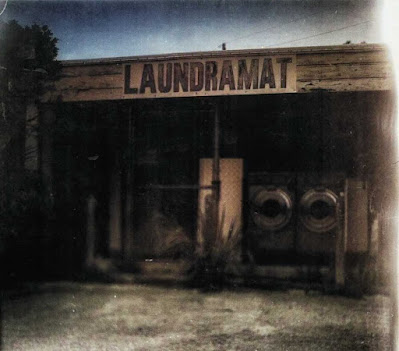 Another of my failures with which I've become enamored.  I find a hideous decadence in it.  It has the shape of my nightly dreams, the substance and color of them, the murky mystery and foreboding.  What am I doing there and why?  I am horrible for posting it.  Now it might haunt you, too.

I wrote the following post this morning.  Don't bother reading it.  It is as I predicted.  I am on my mother's computer and not my own, and for some reason although they are exactly the same, it is different.  It has thrown me off.  What follows is a diary entry, a log of events without wit or charm or imagery.  It is a dull recounting of a dull day told in an unsuccessful way.  It happens.  All we can do is wait for the next best thing.

I left my laptop at my house once again yesterday, so I am on the laptop I bought my mother when I bought mine.  They are exactly the same.  Still, it bothers me not to have my own.  Everything seems alien.  It shouldn't effect my writing, but I am sure it does.

But never mind that.

Yesterday was another failure of my photographic genius.  I had big plans for the day.  Nothing came of them.  I am lazy, I must admit.  Since retiring and moving into squalid solitude, I manage to do less and less with every hour.  It is exactly like the old joke.

How many retirees does it take to change a lightbulb?

One, but it takes all day.

After the gym, I went to my house to shower.  I wanted to process some of my medium format color film, but both cameras still had a few shots left on them, so I decided to drive toward the photo store where I needed to buy some 4x5 negative sleeves and perhaps finish the rolls of film while wandering around the streets a bit.  Rather, on my way there, I stopped at a restaurant to get a bite to eat.  It was one of those "bowls" places.  I had never been there before, but it was the last place I stopped before getting run over on my Vespa.  I remember thinking that it looked good and that I would eat there sometime.

The time had come.  I parked and got out of the car and looked around the lot to see if there might be something interesting to photograph, but of course there wasn't.  So I just got lunch.  It was a good lunch, too, a big bowl of rice and Buffalo chicken with a variety of vegetables.  Healthy me, I drank it with bubbly water.  By the time I had finished, it had begun to rain.  What to do?  My intentions were to return a loaned lens to the fellow at the photo store who had given it to me to try out, but I still hadn't finished the roll of film.  Silly me.  When I got to the store, I realized all I had to do was change the lens.  Duh.

When I got home, I decided to finish the roll of film in the camera so I could develop it and see what the images with the borrowed Petzval-like lens looked like.

When I opened the camera, there was no film.

How many retirees does it take to load film into a camera?

You finish the joke.

My lunch bowl had filled my belly, and it was raining.  I was sleepy.  There was only one remedy for that.  I decided to take a brief nap.  I love to nap, and naps are healthy.  So I lay atop the cool silk comforter in the guest bedroom and listened to the rain.

And when I awoke, it was late afternoon.  The nap was none too brief.  I was expecting two packages, one an electronic gram scale like the drug dealers use, and the other a batch of chemicals that I will mix to develop the dry plates I had planned to shoot.  Only the drug scale had arrived.

I decided to load film holders for the 4x5 cameras.  As I have learned, loading film is an important step in making analog photographs.  Hands in the dark tent, I fumbled around blind until they were all full.  I still hadn't gotten the chemicals, so I practiced loading a film holder for the developing tank, a twelve negative holder I find impossible to use.  I spent at least half an hour with my hands in the tent trying to load old negatives, but try as I might, something always went wrong.  But I was getting better.

And still the chemicals didn't arrive.  My mother was not feeling well and said she didn't want dinner, and after the big lunch, I didn't want much either.  The day was moving toward dusk, so I packed up my things (less my laptop) and headed back to mothers.

We sat in our usual places in the open garage as I drank the evening's first scotch and smoked a little cheroot.  Then I made a simple dinner of avocado and tomato topped with chopped garlic, salt, and red pepper, followed by a bowl of lentil soup.

We watched the news while I ate.  But then what?  I turned the t.v. over to my mother so she could watch episodes of commercial t.v. and decided to go back to my house to pick up my package.  I didn't want to leave them out on the porch in the rain all night.

When I got back to her house, she was lying on the couch.  She didn't feel well.  I had been fuzzy all day as well.  I told her we surely had breakthrough Covid.  Probably.

I turned off commercial t.v. and turned to Amazon.  They recommended this (link), a documentary by David Maysles who made "Grey Gardens," one of my favorite documentaries ever, and this (link) which I HIGHLY recommend.  I thought my mother would like watching a documentary about someone her own age who had become rather successful, but she had little interest in it at all.  And truly, it was an unsatisfying work.  I wouldn't recommend watching it.  Maysles at 88 isn't the filmmaker of his youth.

When that was done, it was off to bed for another miserable night.  The bitter end to a perfectly nothing day.