I Can't Recommend Reading This One 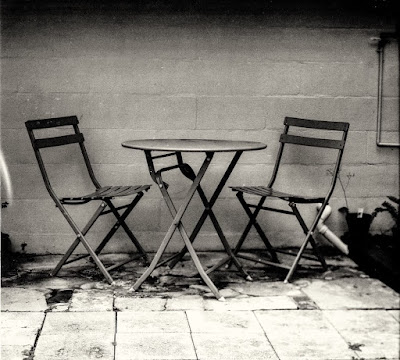 Well look at that!  It's like Groundhog Day.  Yup.  I've been testing some more.  Just around the house.  It is a new film for me.  Groovy, eh?  And not colorized.  Well. . . I told you I'd get over it.  I don't know.  It just reminds me of the Tuileries.  Such a simple, elegant design.

But yesterday didn't go so well.  In fact, it was mostly a disaster.  I muddled through the day somehow, but everything I did turned out poorly.  I did actually go out with the monster camera and shoot some things, but I got confused and made double exposures on the negatives.  When I went back to the house and developed them, I got just what I thought I might--two blank negatives and two that were double exposed. My experiments in Photoshop were failures, too.

Last night was no better.  Sleepless, by and large, but for the horrible nightmares of disease and death, waking up and thinking about dead friends and my own health problems.  Then, with the coming of the sun, I fell asleep.  I don't think scientists have figured out why that happens yet.  I'm pretty sure, though, that the morning sleep is as important as the sleep you get before midnight.  Or should get, they say.

And so we question science and scientists and all the results of their thinking.  Global warming, for instance.  You talk about a lie.  Fake science.  How could they know that?  The earth goes through natural cycles.  That, at least, is what my own mother has told me.  There have always been predictions of doom and gloom and coming disasters.  Hell, look to your Bible, man.  Nothing but atrocities there.

Trust in auto companies and Monsanto.  Why would they want to poison the planet.  They have to live here, too.  Or are they going to leave us behind in a Bezos rocket to Mars?

And what about that Cuomo?  How'd he get away with that for so long?  You know he killed all those people in the nursing homes, too.  Democrats try pointing to Trump, but he's done nothing you wouldn't do.  People love him.  He's raised one hundred million dollars in six months.  Could Cuomo do that?  Hell no.  Cuomo's done.  And he never grabbed 'em by the you know what, either.

Yea, yea. . . I've got voices in my head.  Whenever I return to my mother's house, Fox News is on the television.  Number 1 news channel in America.  More people watch Fox than any other network.  That many people can't be wrong.

Voices in my head.

My neighbor is an anesthesiologist.  His daughter is a pediatrician.  They are both terrified by the new Covid cases.  The hospital is full of pregnant women with Covid.  They are delivering babies from mother's on ventilators.  Women in comas.  One in one thousand people in my state are walking around with Covid infections right now.  The hospitals are overflowing once again.  New, stricter protocols have been put in place.  Meanwhile, the Governor has mandated that no school can require masks.  A real cowboy he is.

Screw the science.  We spend too much on it.  Did you know Fauci was the highest paid government official?  That's what I heard.  Of course he'll say we are in a pandemic.  That's his bread and butter.

I saw a man at the intersection of a busy highway yesterday begging for money.  On both sides of the road, businesses had put up signs--"Now Hiring."  Still, people rolled down their windows and gave him money.

I wonder how much money we are saving by giving Afghanistan to the Taliban and Chinese?  I'll bet it's a lot.  I wonder who "they" will give that to???

O.K.  I'll stop.  I've quit sending ridiculous things out of the paper to my friends each morning.  I'm leaving them to their own forms of misery.  Other than when I'm with my mother, I'm a mute.

I may get my wish.  We may one day quit taking turns to die.