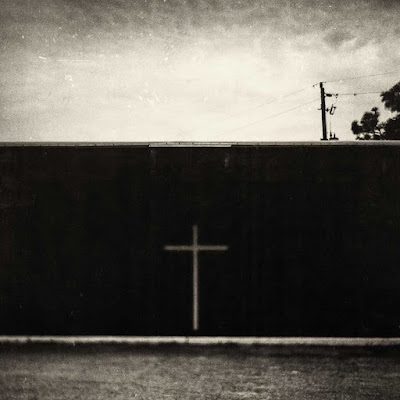 Yesterday was to be a day of chemistry.  Having travelled out of my own zip code twice this week, I was ready to mix up some chemicals and soup the film.  That's hip tech lingo for the aged.  Soup some film.  I got up in the morning and did my usual morning drill and sat with mother for awhile before I packed up some exercise clothes and my laptop and headed for the house.  I was going to exercise, but the day was already getting away from me and I am hurting and tired of exercising, so I just went home.  Once there, however, home ownership took hold.  I haven't been living there for over nine weeks now, and the outside of the house is a mess.  I put my things inside and went to the gardening shed.  I was going to Weed and Feed my yard as the university ag page says I should do.  Lawns are delicate this time of year in my own home state, they say, and so it is important not to stress it with too many or too harsh applications.  Finding I had no Weed and Feed, I headed to the local hardware store.
It is not difficult to push a broadcast spreader around the yard, but doing it made me feel manly.  I was taking care of business, by God, and not just dicking around with cameras.  This is what REAL MEN do on weekends. . . take care of business.
When I had covered all of the lawn of my considerable estate, I put the spreader away and got out some weed killer.  Oh, boy. . . I'll hear about this I am sure.  I hate Monsanto, I say, but there I was using there terrible, earth and human decimating product.  Just a little, though.  It's so easy.  You just point and squeeze the button and try not to get any of the carcinogen on you.  Pay attention to the breezes.  Always stand upstream.
When I finished poisoning things, I put the chemicals back in the shed and took out my machete.  Oh, yea.  My neighbor has planted some hideous vines that are taking over part of my yard, so I went to hacking.  I can tell you with great and tremendous pride that I didn't chop off a finger, an arm, or a leg.  Nope.  But I could feel the danger of an old man uninitiated in the ways of machetes in the smart part of my brain.  I could envision trips to emergency wards with towels wrapped tight trying to slow the bleeding.  It was hot.  My clothes were soaked with sweat.  One could not tell that I had hacked at those vines from afar.  I decided there were better things to do with my day.  Machete back in its sheath and back in the shed, I headed for the house.
But I wasn't finished yet.  For years, the a.c. duct in my kitchen has been a problem.  I've had no fewer than three air conditioning companies look at it.  Condensation forms and drips from it.  It has caused damage to my ceiling that I have had repaired several times.  It was beginning to look like Fido's ass.  Manly Me, manning up, got a screw driver and a chair and removed the vent.  There was moisture inside.  Maybe, I thought, the problem is no more than cold air hitting the vent.  I put the metal vent into the sink and cleaned it good with bleach.  I looked at the open hole in the ceiling.  I would leave it and see if any moisture formed.  I am sure it won't.  The solution isn't to leave a hole in the ceiling, however, but I am sure to find one.
It has only taken me a decade to look at this for myself.
Having done manly things for what seemed days, I decided it was time for a shower.  And then a mimosa. I still had some film frames in my cameras from my beach trip that hadn't been exposed.  I would drive and finish off the film.  Right after a mimosa.
The Cafe Strange makes theirs with oranges they squeeze right before your very eyes.  And you can see them pour the not bad champagne, too.  They are not chintzy.  A big stemless wineglass for $6.  You just can't beat it.  That and the misfits who work and gather there thrown in.  It is quite a deal. 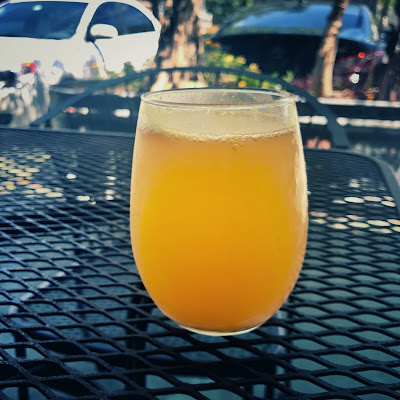 I journaled and took photos like this and texted them to friends in the early afternoon warmth until the air became too still.  It was time to take some pictures.
A little drive and the film was done.  Back to the house to. . . you've got it. . . soup some film.  I had two medium format rolls and four color 4x5 sheets that I would process.  Out to the garage, everything into the dark tent, film on the reels, film in the holders. . . boy, I said to myself, you are getting good.  My hands have really gotten used to working independent of my vision.  What used to frustrate me so now takes little time.  Skills, buddy.  What's that saying about old dogs?
Back to the house across my newly doused lawn.  I had set the color chemicals in a pan of water with the sous vide set to 150 and they were up to temp and ready to go.  First, I would soup the medium format film as the tank held more liquid than the other.  Good thinking.  First, a water soak for one minute.  Then, when I turned it over to empty it out, the top came off.  I clamped it back on, but I knew it was over.  It would only take 1/200th of a second to overexpose the film.  My heart sank.  Why?  Why?  I can't have anything nice.  Something always goes wrong.  I am cursed.
I finished souping the film anyway, lid leaking those dangerous chemicals over my hands with every turn. If Monsanto doesn't get me, CineStill will.
Chemical processing done, I rinsed the film and took it out without hope.  It is a good thing I hadn't hope.  The top reel was almost black.  The bottom reel, further from the light, still showed images, but I knew they would be damaged beyond usefulness.  Still, I hung them up to dry.
It was getting late.  I needed to get back and make dinner for ma.  But I still had the 4x5 sheets to go.  What the hell.  They probably were ruined somehow, too, but I decided to process them before I left.  I heated up the developer to the proper temperature and poured it in.
Shit!  I hadn't presoaked the film!  I was distracted and in a hurry watching the clock.  Whatever.  What the fuck ever.
3.5 minutes developing.  8 minutes Blix.  3 minutes washing.  And then. . . three out of four sheets had images.  Two of them showed terrible light leaks.  WTF?  One of the holders is no good.  I am going to have to figure out which one.
I was late.  I took out the garbage and pulled the big can to the street for the morning.  I grabbed my clothes, fed the cat, and dashed.
Oh, yea.  I forgot my computer again.  My mind is not what it used to be I must guess.  Too many mistakes.  Too many bad accidents.
I've made a lunch date with a friend in a far away town for Thursday.  I will go out and photograph and then have lunch with her.  On Friday, I take my mother to the Ortho for her check up.  It will be the ten week mark.  Will I begin to move home then?  I don't think my mother believes that I need ever do that.  Things are fine this way.  I am certain that is what she thinks.  I am absolutely certain of that.  But I need to have my time again, time to watch what I want, to work on pictures late into the night, to abuse myself in any way I wish at any time of day or night. . . .
When I got back to her house, we had the usual cocktail and then I made dinner.  We watched the news about Hurricane Ida, then she put on "Naked and Afraid."  What can I say.  We let that play late into the night.
If this is drivel (IF?!), maybe you can understand why.  One day, hopefully sooner than later, I will have a real tale to tell.
Posted by cafe selavy at 8:55 AM