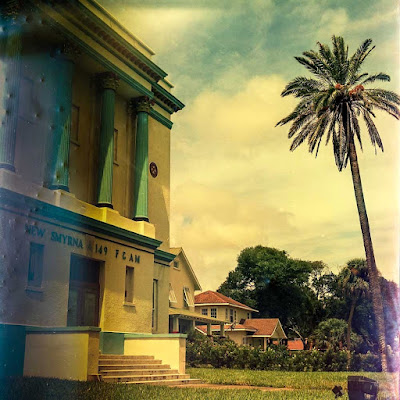 Such beautiful tragedies these mistakes.  This is from the rolls of film that were accidentally exposed to light during development.  Just prior to, actually.  I processed them anyway.  I'm glad I did.  It is thrilling to me just now to be processing my own color film.  I wouldn't have even thought to try if it weren't for shooting 4x5 film, but this is from my medium format camera, 2.25x2.25 (inches) or 6x6 (centimeters).  God, I'm falling in love with them.  After shooting 4x5, they seem absolutely small, but they give such a different image than the smaller 35mm.

I just can't bring myself to shoot digitals right now.

The "dimples" you see on the left side of the image are from the water droplets that were on the film when it was exposed.  I worked for a very long time yesterday to make this image what it is--lots of Photoshop magic.  I couldn't fix it entirely, but I can always go back.

But, in truth, you can never go back, can you?

That image, though, is surely pure old semi-tropics.  It was the Bahia Temple that stopped me.  There was no place to park.  They did not even have a parking lot.  The street next to it was full of cars as a farmer's market was taking place on the other side of the street.  I almost passed it up, but I decided to make the photo no matter.  You can't be a photographer if you don't take pictures, and you can't be a good one if you only take the easy ones.  It is so declared.  So I parked ever so far away and hoofed my camera back to the Temple to make some images.  Voila!

I have salvaged six images so far from the wreckage.  After the gym, I went back to my house to shower and mix up chemicals so I could try some glass plate stuff, but when I got into the house, I picked up the 4x5 film that had dried overnight and sat down to scan them.  And that was it.  I worked on negatives for the rest of the day.  Five hours later, I had six fabulously flawed images.  You will see them.  It was everything I could manage not to post them all today.  There are a few more to process, too.

While working away on the pitiful things, I looked up at the clock, and it was already time to travel back to my mother's to prepare dinner.  I hadn't left the chair.  I hadn't showered, hadn't even taken off my shoes.  If I were living at my house, I would have worked for another couple of hours, made something to eat, and had the first big scotch of the day on the big leather couch while I sunk down to watch whatever I wanted.  But I wasn't.  Duty called.

I showered and changed and took out the garbage and fed the cat who wasn't there, packed up my things (remembering to take my laptop), and drove back to my mother's.  I got there in time for a quick cocktail before I began making our dinner.  I told my mother of my day and she told me of hers.  The evening had cooled and was something pleasant now.  There was a slight but comfortable breeze.  In August and September in the sunny south, you take what you can get.

Back in the house, I began chopping vegetables for my hybrid Greek salad and turned on CNN to find out what hideous things they had to say today.  Oh, man.  I should not comment.  I have told myself I wouldn't.  But I am astounded by the New Normal.  Hurricane Ida was just another result of climate change.  That is a big part of the New Normal.  That such a horrendous thing has been normalized is terrifying.  It is just something people say now.

Accept it and move on.  WTF?

And I really shouldn't comment on the End of the "War."  Really?  The Afghan "War"?  More Allied troops were lost in one day--D-Day--in WWII than in twenty years in Afghanistan.  "War"?  It was something else.  This was part of "The War on Terror."  You can't fight terror.  Try it.  Do the home version.  Arm yourself to the teeth and defeat terror.  You can't.

The U.S. hasn't won a war since WWII.  Can you imagine--that was done with draftees!  Kids off the farm who had no choice.

"You're in, kid.  Pick up your uniform and rifle.  We're sending you to the War."

None of the soldiers in Afghanistan were drafted.  They signed up.  It was a job.

And so everyone I see on television who has made money sending soldiers off to "war" is really sad that thirteen soldiers died.  Thirteen.  They've never felt so badly.  Such a terrible loss.

I don't know.  I guess this, too, is part of the New Normal.

But fuck that.  Did you see my picture?  It is ruined. . . a mistake.  I should rename my blog "Flaws, Mistakes, and Misdemeanors."

Maybe I should speak of the New Normality toward sexual things?

Nope.  I've got to let this shit go.  Tomorrow, I'll show you another of my beautiful broken dreams.