There Would Be Dinner 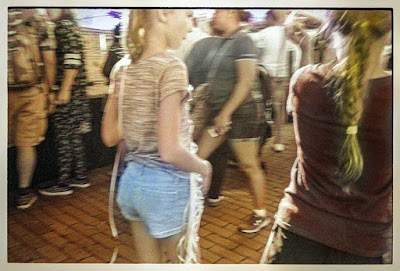 I felt like a UPS driver yesterday.  It seems I spent half the day in the car.  I had things to do and my mother's therapy bisected the day into two unequal parts.  Still, I managed to make it Sushi Friday.  It was partially satisfying.  As predicted, I sat at the kitchen table with my mother long before dark came, the bright overhead light, my mother sitting with warmed up leftovers from the night before.  I unwrapped and plated my dinner and set it regally upon the table next to her.  We began to eat in silence.

"Are you going to put on sushi music?"

I turned the television onto the YouTube channel.  I went to search."

"Sushi music," I said.  I adjusted the volume and returned to the table.

That didn't move her.  I wondered aloud why eating raw fish became a popular thing in only one culture.

"The Japanese are a very lazy people," I kidded to my mother.

"They are too indolent to even cook their meals."

The music was atmospheric.  Just then we were listening to the tinkling of chimes and the occasional soft gong.

My mother looked at me blankly.

She had finished her meager leftovers long before I had eaten my dinner.  I poured more sake.

Dinner was over and everything cleaned up.  It was just six o'clock.  Jesus, I thought, it is a long way to bedtime.  I poured a scotch to kill the sushi worms.  I poured my mother a beer.  We went outside to sit in the muggy late afternoon/early evening air.  I stared into what the cosmos offered, the across the street neighbor's house, the empty sidewalk to the left of me, the yard to my right.  The street was quiet.

"Look at my windshield."  My car sat before us in the driveway.  There were maybe ten drops of rain reflecting the light.  We joked about the daily weather forecast for rain.

But then a band of rain in a bright sky.  And before it was over, a second.  We retreated to the house.

And it rained hard, then harder, then even harder.  It rained like a typhoon for two hours.  There was nothing to do now.  We turned on the television.  I went to the freezer and to get a Klondike bar.  My mother had bought a box of them a couple days before.  I hadn't had one yet.  There was one left.

Friday night.  It was still a long way to bedtime.  I knew I would need something to help me sleep, but I was plumb out of sleep aids.  The good ones, I mean.  I would have to rely on that over the counter poison.

What strange shapes would my dreams take tonight, I wondered?  What would I do tomorrow?  There was little mystery in it.  My mother wanted to go to Costco.  I would go to my house to feed the cat.  In the evening, there wold be dinner.